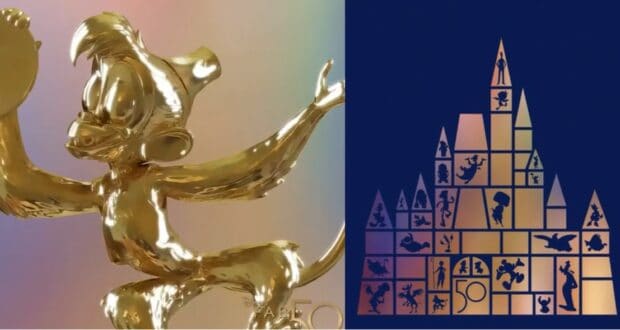 An Aladdin Character Makes It Into the “Disney Fab 50”

Can you believe it? We are less than 50 days away from what all of us Disney fans have been waiting for, for what seems like forever! Our Disney Resort rooms are booked, our Park pass reservations are made, and we are looking forward to experiencing “The World’s Most Magical Celebration“ at Walt Disney World. Disney is preparing to celebrate 50 years of magic-making during their 18-month long celebration beginning October 1. No plans to visit Disney just yet? No worries! With the length of Disney’s celebration, we hope you plan to come to visit Mickey soon enough! Disney keeps counting down the days with us which means the countdown for the “Disney Fab 50” sculptures is well underway. Sure, the focus may be on the two new nighttime spectaculars including “Disney Enchantment” at Magic Kingdom and “Harmonious” at EPCOT that are making their debut, but we can’t help eagerly await the chance to experience Disney Fab 50 sculptures that will be available throughout Walt Disney World’s four theme parks. Several favorite Disney characters have been revealed so far, and now Disney has revealed the latest character to add to the list… a favorite Aladdin character!

Beginning October 1, Guests will have a chance to scavenger hunt through all four Walt Disney World parks to virtually “collect” each golden Disney character sculpture on Instagram.

As the Castle slots (shown in the image above) continue to slowly but surely fill in, Disney has announced #28 in the “Fab 50” character lineup! As shared via Aladdin The Musical on Instagram: “Our very own Genie, Michael James Scott, revealed that Abu is part of the Disney Fab 50 Character Collection that you’ll be finding across all four @waltdisneyworld theme parks during “The World’s Most Magical Celebration” starting on October 1st. #disneyworld50”

Welcome to the list Abu! You’ll be able to find Abu at Magic Kingdom Park beginning October 1. Here’s the lineup of Disney characters included in the “Fab 50” sculptures thus far:

There you have it! We have almost reached 30! Which Disney characters are you hoping to see added to the “Disney Fab 50” lineup? We’ll keep sharing the news about which characters are included as Disney keeps the Fab 50 countdown rolling.