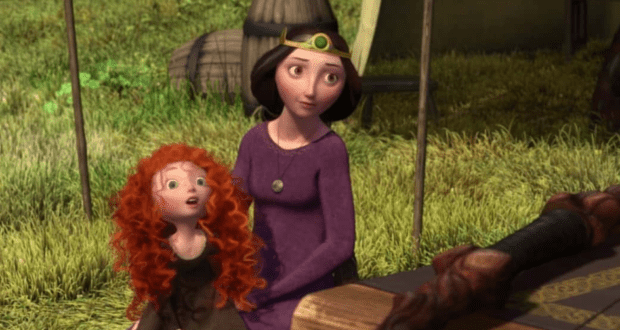 Bearing Through Tough Times with Mom: A ‘Brave’ Break in Disney Movie Traditions

Is there an ongoing trend in Disney-Pixar filmmaking for making mothers out to be beasts? While the release of Turning Red earlier this year serves as the most recent example for these sorts of themes, the start of such a tradition arguably goes back to Disney-Pixar’s Brave in 2012. What’s most ironic, though, is the idea that a film known to break with so many preexisting Disney traditions would be a trendsetter for a new one. But that’s usually how it goes, and as a result, you see movies like Brave standing out boldly and “bravely” against the tests of time.

Because of its timelessness, not to mention its very mother-centered plot, we feel that watching Disney-Pixar’s Brave only seems right in light of this being Mother’s Day Weekend. So, gather together with Mom and take in this delightful original tale that’s about a mother and daughter “bearing” with each other to overcome a most unusual dilemma.

Set in Medieval Scotland sometime around the 10th century, Brave follows the story of a princess named Merida, daughter to King Fergus and Queen Elinor, and big sister to three identical triplet boys. Queen Elinor, being the very epitome of royal tradition, has high expectations for her daughter to follow in her footsteps and eventually establish herself as an equally model queen. The problem is that Merida has a hard enough time as it is living up to the expected perfections of a proper princess let alone those that come with serving as a paradigm queen. A natural deviant to all conventional norms, Merida loves archery, adventure, and her independence. It is the latter that leads her to eventually defy her mother’s wishes for entering into a betrothal and then an eventual marriage.

Related: Want to Become a Scottish Lord or Lady Like Merida from ‘Brave’? This Unique Company Has the Easy Way

After the situation escalates with things being said and done in the heat of the moment, Merida is eventually led by a legendary wisp to the door of a witch in what she feels is a solution that will end up changing her fate. In desperation she seeks a way to “change” her stubborn, misunderstanding mother without considering the consequences for such a request. Change isn’t always good, as Merida soon learns firsthand when her mother does in fact change. That change, however, manifests in the form of a bear transformation.

From there, most of the plot follows Merida and Elinor on a quest to undo the beastly transformation. They learn that they have limited time—only until the second sunrise, to be exact—to mend a broken bond. And while they have a literal solution for completing the task at hand, it’s the figurative mending that binds them along the way, with each character learning to be more sensitive and mutually accepting of the other, regardless of their differences.

The clash between mothers and daughters is nothing new in Disney films. We’ve seen this scenario play out many times over the years and throughout various other films. The classic Freaky Friday storyline is perhaps the perfect example of a live-action demonstration of mother-daughter miscommunications and the conflicts that escalate when each is unable to relate thoughtfully to the other. And the fact that Freaky Friday has been remade several times over it is a testament to the timelessness of such story arcs. Then, we can always go back to the aforementioned Turning Red as another example.

Still, Brave takes the concept of having a “beastly” mother to a more literal level than a figurative one. What’s more, the way the clashing between Merida and Elinor is handled is done in such a unique sort of way. It starts out on a very subtle note—a distinction of a mother and daughter having two very different personalities. Rather than being an outright disapproving, scolding mother figure, who is forever finding fault with and ridiculing her daughter nonstop, Elinor largely limits herself to only issuing reminders to Merida about what a lady does and does not do. And it’s clear to see that although her intentions are misguided, she really does truly love her daughter and is concerned for her wellbeing.

This point is reinforced in certain earlier scenes that balance out the mother-daughter relationship. In the beginning, for instance, we even get to see Elinor’s playfulness with her young daughter, and then again, we witness her readiness to believe Merida about seeing a wisp rather than scoffing at her. This confirms that Merida and her mother do share in some unique mother-daughter commonalities that are exclusive to them. Then there is that moment right before Merida’s debut to the lords that we sense Elinor’s fleeting moment of guilt in making her daughter go through with something she doesn’t want to do. Later on, this is followed by her remorse for overthrowing the bow into the fire during a heated conflict.

All these demonstrations point to a very unique dynamic in the mother-daughter relationship depicted between Merida and Elinor. It’s rare for a movie, especially an animated one, to present such a balanced perspective of miscommunication that doesn’t set such rigidly drawn divisions for what is 100 percent right or wrong, good or bad. The fact is, Merida and Elinor both love each other and are on the same side. They just have the typical mother-daughter misunderstandings that can sometimes lead to atypical problems—like one accidentally transforming the other into a bear.

Related: The Four Loves of Disney

A Break From Tradition

The film echoes sentiments of breaking with tradition throughout its well-played storyline. But it’s not just a plot about defying tradition; the entire making of the movie on a whole required breaking from previously defaulted Disney traditions. First, there’s Merida. We already established that she is an untraditional Disney Princess. But it’s also worth noting that she happens to be the very first Disney-Pixar Princess ever. Also, while she isn’t the first one to remain single, she’s still in the minority for those Disney Princesses who have kept to a singular status. Another difference is the fact that Brave isn’t a musical, as is usually the case for Disney Princess films. While none of the characters ever slip into synchronized musical numbers, the movie does feature a wonderful Celtic-influenced soundtrack with musical interludes that play out in various scenes.

Related: Here’s Exactly How to Be Merida From “Brave” For Halloween

Perhaps the biggest elephant in the room still needing to be addressed, though, is the very reason for why we’re recommending Brave as our number one Mother’s Day recommendation for the weekend. We’re of course referring to the fact that Merida, unlike most Disney Princesses, has a living mother by her side throughout the entire movie. If that isn’t a most blatant break from tradition! And the fact that the inclusion of a mother figure is such a primary part to the plot is revolutionary, to say the least. All in all, it’s safe to conclude that Brave made many brave moves in breaking with tradition.

We could list dozens of other reasons for why Brave is our top recommendation for weekend streaming on Disney+, but the fact is, we really don’t have to. Brave remains, hands down, the perfect Mother’s Day pick as it is—a feel-good flick to watch together as a family, with your own mother by your side.