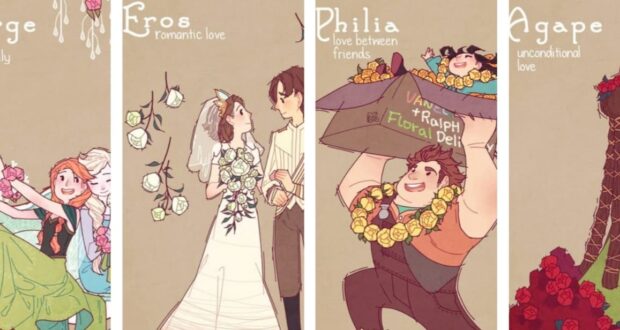 The Four Loves of Disney

The Four Loves is a book published in 1960 by writer C.S. Lewis, author of The Chronicles of Narnia. The book examines the philosophical aspects of love, and the different types of human love we experience in life. These types of loves are: storge, philia, eros, and agape. Storge, or familial love, refers to natural or instinctual affection, an empathy bond. such as the natural love of a parent towards their child. This affection has the appearance of being “built-in” or “ready made”, and as a result, people come to expect it regardless of their behavior and its natural consequences. This affection can be corrupted by such forces as jealousy, indifference, and smothering. The advantages of storgic love exists in how much active love is exchanged within families, thus enabling greater ability to understand one-another. 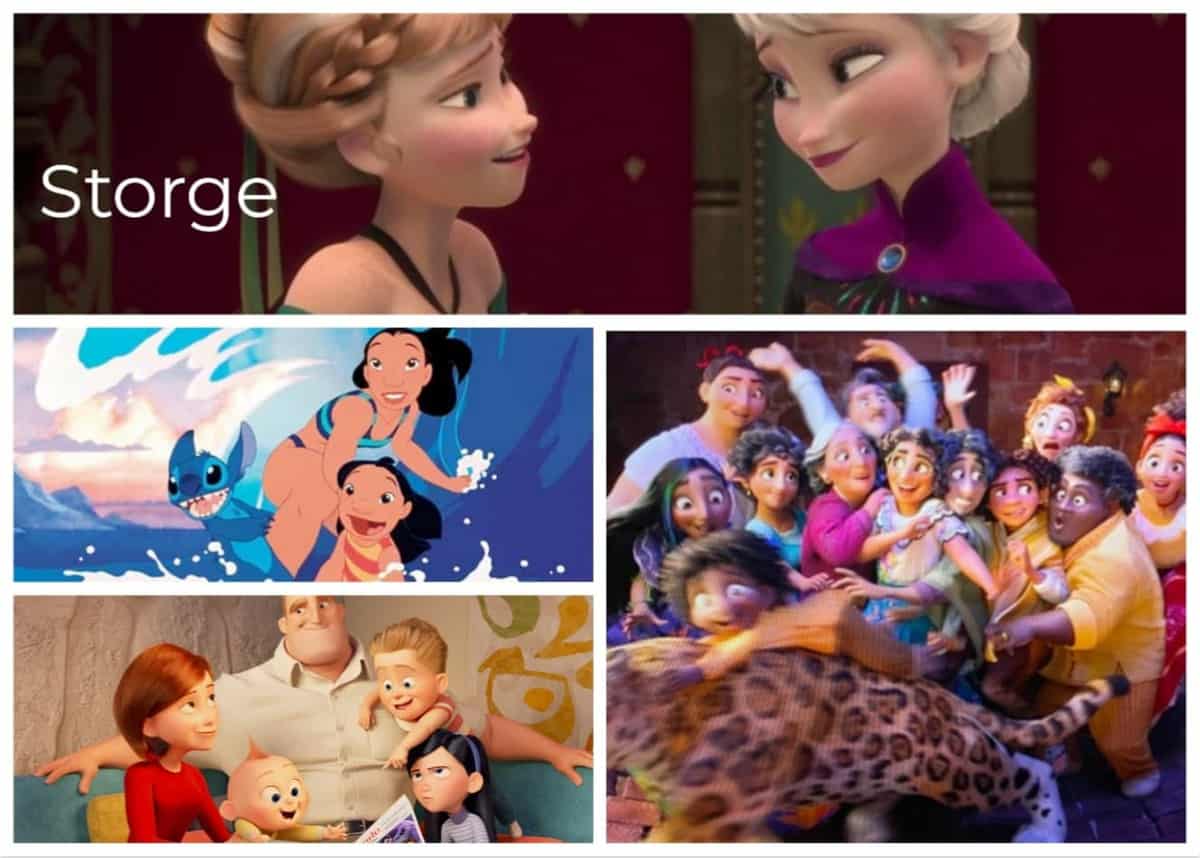 Lilo and Nani Pelekai of Disney’s Lilo and Stitch (2002), taught us “Ohana means family, family means nobody gets left behind or forgotten.” These sisters fight, especially with the pressure Nani has on her to be a responsible guardian for her sister after their parent’s death, and Lilo’s love for her chaotic pet Stitch. But they overcome everything that comes their way, including aliens, to preserve their Ohana.

The Parr family from Disney Pixar’s The Incredibles (2004), are initially a family in conflict. Father Robert wants to embrace his and his family’s powers, and Helen wants nothing more than to blend in and be normal to keep her family safe. But “The Incredibles”, come together to fight a common enemy and learn to express themselves, and work out their familial battles in the process.

Disney’s Frozen (2013) sees sisters Princess Anna and Queen Elsa as a loving pair in childhood, until childhood trauma and fear distance them. When Elsa reveals who she truly is, and Anna shows her unconditional love for her, their relationship is saved along with the kingdom of Arendelle.

Disney’s Encanto (2021) sees the family Madrigal’s inner conflict brought to the surface when their beloved casita begin to crack. Only when Mirabel begins to repair what was broken in their familial bonds that they can rebuild their home stronger, literally and figuratively. 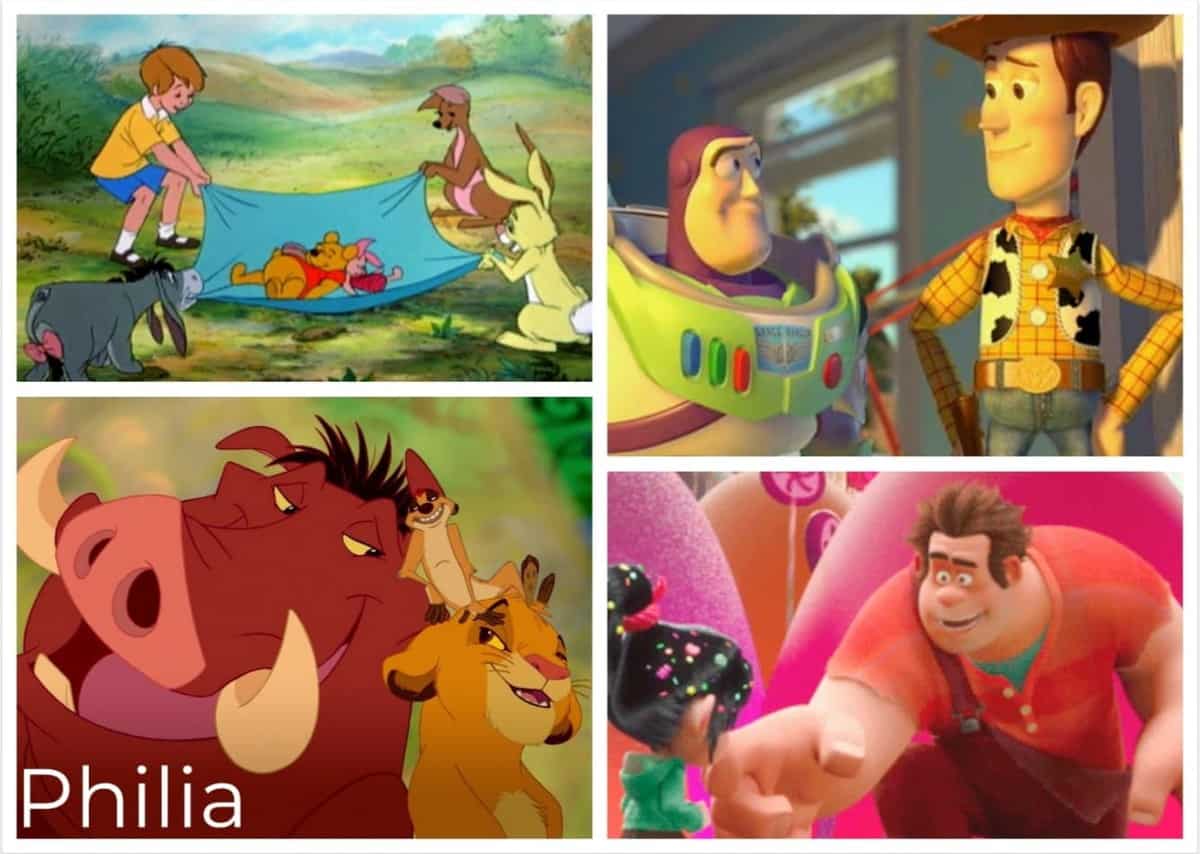 Disney’s The Many Adventures of Winnie the Pooh (1977), sees Christopher Robin and Pooh Bear demonstrate the purest form of friendship. Whenever Christopher Robin comes to the 100 Acre Wood Pooh Bear is waiting, always happy to see his friend. They do not need or expect anything from one another but spend time together due to pure love.

Timon and Pumba from Disney’s The Lion King (1994), are one of Disney’s most dynamic duos. When they take in young lion cub Simba into their life of “Hakuna Matata” it is initially out of mutual need. For Simba, it means food and shelter, and for the warthog and meerkat, it means a future adult lion ally. However, as Simba grows so does their bond, and Timon and Pumba eventually follow Simba to Pride Rock to help him take his rightful place as king.

The bond of Buzz and Woody from Disney Pixar’s Toy Story (1995) is one that begins in conflict. Initially, they are enemies, as Woody feels competitive over Andy’s affections. Over time, through the shared experience of overcoming the horrors of Sid’s room, they grow to respect one another. This respect becomes friendship, as they have grown to love and understand one another, especially due to their mutual love for Andy.

Disney’s Wreck it Ralph (2012) is a film about learning to love who you are and your place in life. Ralph is at first obsessed with getting a metal, just so he can feel the acceptance that comes with being a “good guy” in a game. This leads him to help Vanelope race, in pursuit of his goal. However, they bond over their experience and he finds being Vanelope’s hero is better than any metal.

Eros is love in the sense of “being in love” or “loving” someone, a romantic bond.  It is a concept in ancient Greek philosophy referring to sensual or passionate love, from which the term “erotic” (relating to or tending to arouse sensual desire or excitement) is derived. Eros is in itself an indifferent, neutral force, one that may urge to evil as well as good. This type of love was once referred to as “theia mania“ (madness from the gods) and described in mythology as “love’s arrows”, the source of which were often the personified figure of Eros (or his Latin counterpart, Cupid). 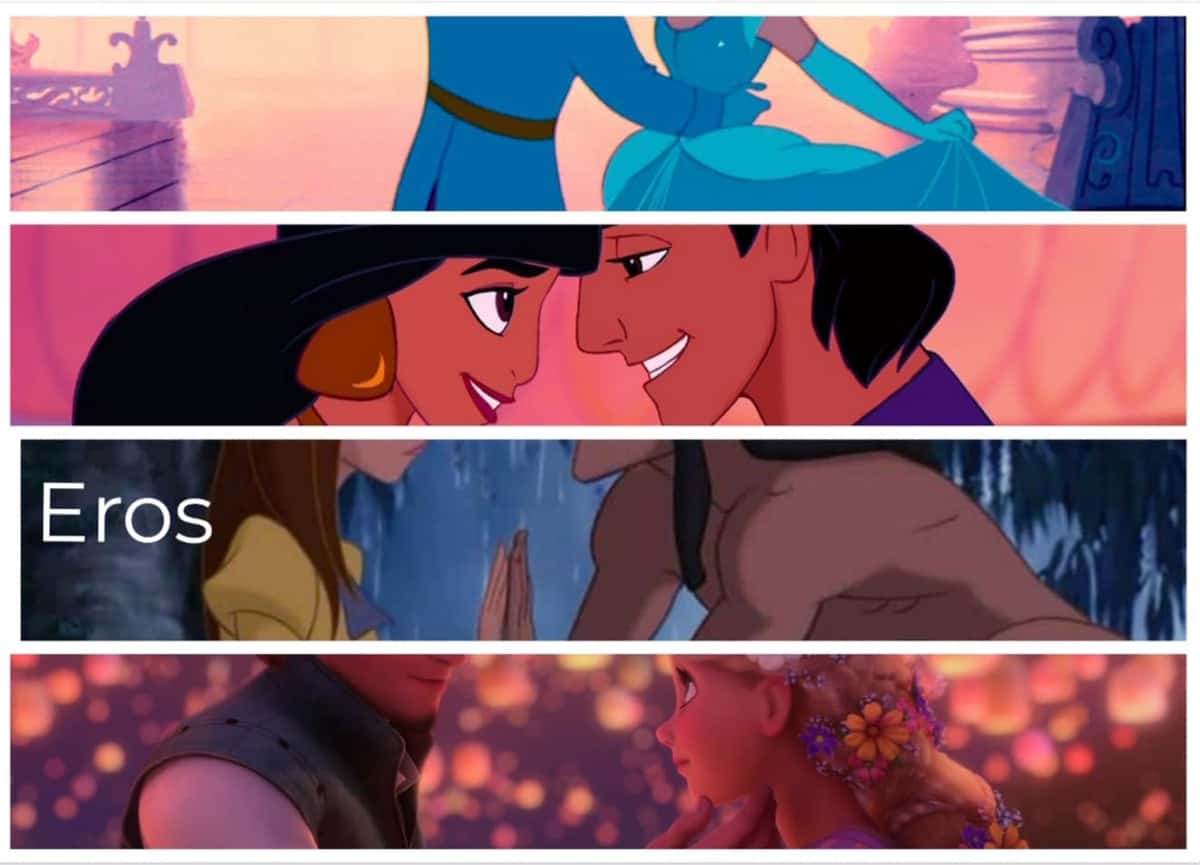 Disney’s Cinderella (1950), sees one of the most classic romantic scenes in cinematic history when the Prince sees Cinderella from across the ballroom and immediately crosses to meet her. The couple spends the entirety of the evening dancing, talking, and falling in love before the clock strikes 12. He searches the whole kingdom to find her, and when she is, she’s the perfect fit.

Disney’s Aladdin (1992), has street rat Aladdin come across the princess in disguise on the streets of Agrabah by pure chance. They begin to fall for each other before the guards interrupt, revealing Jasmine’s identity. Aladdin wishes he could be a prince in order to be worthy of her. “A Whole New World” is opened for them when Jasmine takes a chance on Prince Ali, before discovering the one she trusted was the boy from the market all along.

Disney’s Tarzan (1999), features the Ape-Man seeing a human for the very first time when he comes across Jane Porter in the depths of the jungle. Upon first glance, he knows he has seen someone like him for the first time. He listens to her heartbeat, and hears the very same heart that beats within himself. From their first touch, they are bound to one another.

In Disney’s Tangled (2011), Eugene Fitzherbert spends his entire life as an outlaw until a chance encounter with a girl while hiding in a tower takes him on an entirely different path. It is in taking Rapunzel to the kingdom of Corona that he learns what love is for the first time, and finds a new dream of being a man who could love her. And “at last he sees the light” of what love can do.

Agape love, or the act of Charity, is the love that exists regardless of changing circumstances. This selfless love is the greatest of the four loves, to and to exist it must subordinate the other three natural loves. This is unconditional love, “the highest form of love, charity”. It is a universal, unconditional love that transcends mortal life itself. It goes beyond mutual affection and actively wills the good of another. Putting another before yourself. 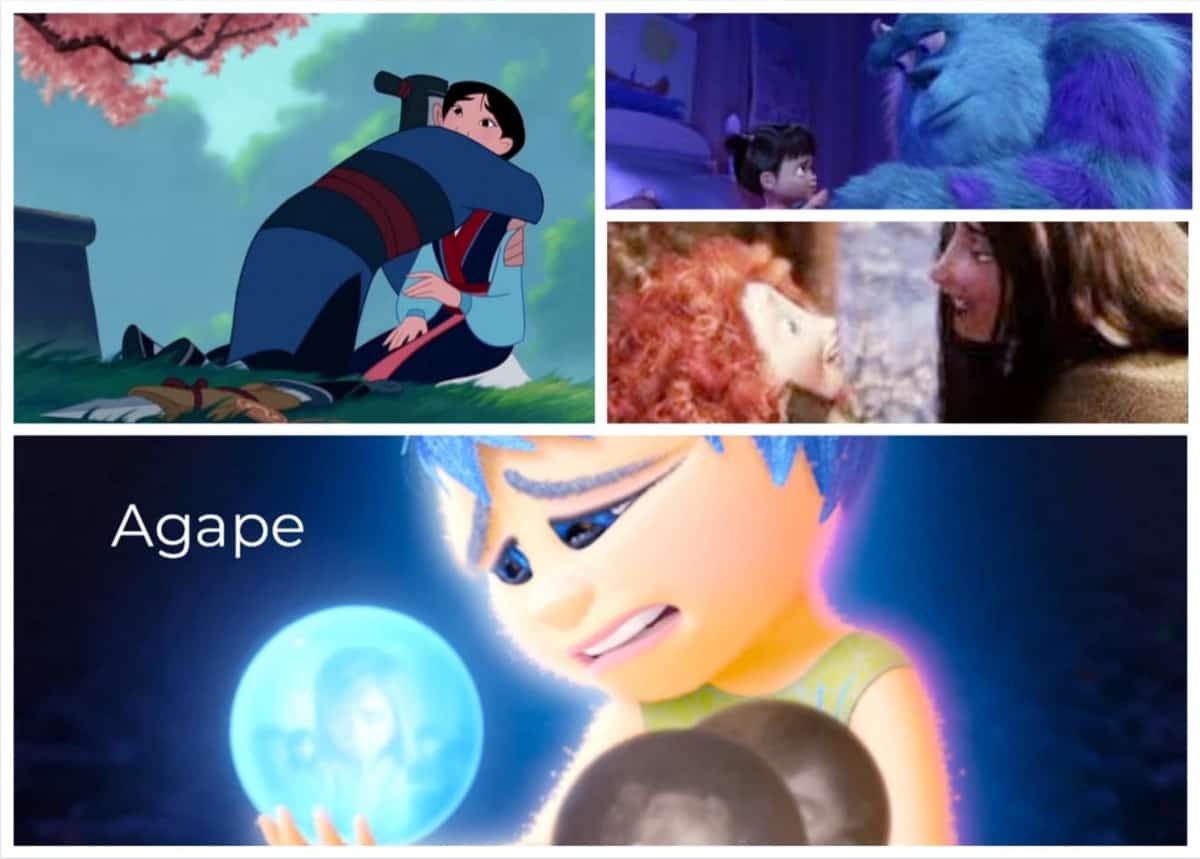 Disney’s Mulan (1998), depicts an amazing example of unconditional love in the relationship of Mulan and her father. When Mulan feels she has disgraced the family in front of the matchmaker, her father offers nothing but support. When her father is called to war as the man of the family, Mulan goes in his place to save his life. And when she returns the hero of China, offering the seal of the emperor as proof, he throws it to the ground to embrace his child saying, “The greatest honor of all is having you as a daughter.”

Disney Pixar’s Monster’s Inc. (2001), shows self-sacrificing love in the relationship of child “Boo” and her “kitty” Sully. Sully grows to love Boo as if she is his own daughter, doing anything to protect her from danger. He puts his career as a scarer and his life in danger for her. When the time comes to say goodbye to her, he does, knowing that she belongs in her home, but always keeping a small part of her close to him.

In Disney Pixar’s Brave (2012), Merida has lost sight of how much her mother truly loves and cares for her in her frustrations that her mother does not understand her. When Queen Elinor is turned into a bear from Merida’s spell, she embarks on a journey to put right what went wrong in their relationship and mend what was broken. This journey has Merida recall all the times her mother was there for her as she faces the possibility of losing her forever. When Queen Elinor changes back, there is no anger but unconditional forgiveness.

Disney Pixar’s Inside Out (2015) shows a unique relationship, that between young girl Riley and her chief emotion Joy. Joy is not just a part of Riley, she loves Riley and wants nothing more than for her to be happy. When Riley moves far from her happy home, sadness starts to encompass those core memories, and her islands of personality begin to crumble. When joy is almost forgotten, she experiences sadness, not for herself but because “I just wanted Riley to be happy.” It’s from this love that joy is able to partner with sadness in order to help Riley.

From love of family, to love of friends, to love of partner, to unconditional love. Disney has told stories that encompass the complete spectrum of love through their storytelling.