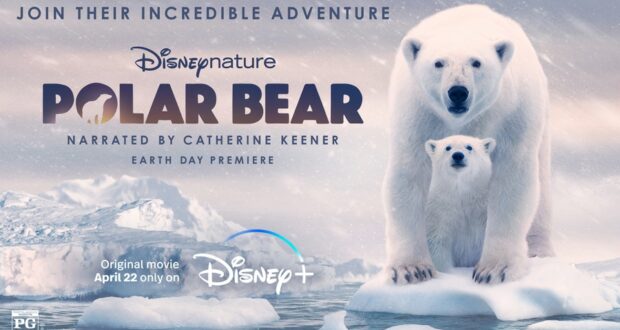 In keeping with the tradition of presenting new releases from Disneynature on Earth Day, the latest in the collaborative collection of feature-length nature films by Disney, Polar Bear, just celebrated its premier on Disney+ respectively this past Friday on April 22. While it would be a pretty obvious conclusion to make in guessing that the featured creatures starring in this production are those titular polar bears, what may not at first be so obvious is the fact that in addition to being a great recommendation for Earth Day/Earth Month—Disneynature’s Polar Bears is an exceptional watch to consider just in time for Mother’s Day.

Of course, we’re not suggesting you put off watching this one until Mother’s Day. That would be an “unbearable” sacrifice indeed! Rather, given the fact that we are right at the end of Earth Month and are already thinking ahead to Mother’s Day, we feel that this weekend may just be the perfect time to gather the family together for a movie night full of polar bears.

Related: New Arrivals to Stream on Disney+ This April

Like all Disneynature films, the content of this film is both educational and family-oriented. And like all true “family” films it brings forth a plot that centers around a family of animals at home in their natural environment in the wild.

The story follows the journey of a first-time polar bear mother, told in a first-person (first-bear) narrative. Now that the new polar bear mother is raising a young daughter of her own, she reflects back on her experiences growing up in the Arctic, remembering all that her own mother taught her throughout life’s ever-changing path. The film leads as a progressing flashback that starts with the polar bear being a cub herself and then moves toward the present moment, detailing the path she took to become the polar bear she is today. Along the way, we get to see demonstrations of how her own mother shaped her, taught her how to survive and thrive during times of hardship, how to navigate natural threats, how to cope with the changing seasons, and how to brace for an uncertain future. Then we get to see her apply what she learned from Mom long ago in a new role as a mother herself, tasked with raising her daughter accordingly.

While we wouldn’t go so far as to say this film is a “polar” opposite of what we’ve come to expect of a Disneynature film, there are some very novel differences in the way this latest storyline is delivered. The most notable observation comes via the angular shift back to an earlier time.

Starting out in the present, viewers are at first led into thinking that the film will follow the more traditional linear progressive model from start to finish. Therefore, it comes as a surprise when the mother polar bear drifts back to a flashback that ends up serving as the primary basis for the movie’s main account from that point forward.

There’s also been a more recent observation of a noticeable narrative shift in various Disneynature films over the years in the way that storytelling is carried out. Traditionally, films of this kind have taken to being documentary-like presentations that feature a third-person narrator telling the story, all while personifying the main animals and even referring to them by name. While Polar Bear certainly isn’t the first Disneynature film to break away from the third-person point-of-view, it is still counted among the more original range of films for having done so.

It’s also worth noting that Polar Bear is the very first film by Disneynature to have received a PG rating rather than the usual G designation. This is largely due to the fact that the film does feature some sensitive content. While graphic details are kept at a most commendable minimum, certain situations like the polar bears hunting for prey, the loss of a brother bear cub, and even the discrete handling of mating and conception are what initially earned the film a PG rating.

Disneynature films have a very original way in going about personifying the animals they portray in each and every one of the original works. Because the creators behind any story are extremely knowledgeable of the species being scripted, they are able to accurately fuse together character portrayals that are both relatable to viewers on a personified, personable level but also retain those thoughts, feelings, emotions, and habitual instincts that define them as the animals they are. As we watch Polar Bear, for instance, we can easily relate to many of the more universal thoughts and emotions that transcend all species. However, there are still those very exclusive polar bear distinctions thrown in as well, like the normalization of parting from family when the time is “right” and the desire for eating whale carcasses serving as just two examples.

A Cinematic Endeavor Worth Praising

Polar Bear offers up an exclusive viewing experience that the vast majority of audiences would otherwise never get to share in. For starters, filming was done in the remote region of Svalbard, Norway—a mere 650 miles from the North Pole. And given the often too brutal sub-zero temperatures there, it goes without saying that to capture such stellar footage for this picture was no easy task for the film crew. On top of all that, the act of filming on location spanned around two and a half years. This was in order to compile all that was needed in chronicling polar bear life, showcasing the changing seasons, and for documenting life’s ever-changing event of growing up in the Arctic.

Another very important hardship worth addressing is the very nature of polar bears in general. To say that they can be ornery would be an understatement. In truth, they can be downright dangerous and will not hesitate to hunt a human. Therefore, navigating ways for getting close enough to them to capture such intimate footage is an impressive endeavor worth praising.

A Fitting Tribute to Moms

Due to the heavy focus on mothering as depicted throughout this film, we feel that it makes a most fitting tribute to moms of all different species and at any stage of motherhood. That brings us back to our earlier point about this being an excellent Mother’s Day pick. But the reality is that this film can be enjoyed on any holiday, any season, and at any time of the year.

Related: Which Disney Mom Are You?

While the movie concludes in an open-ended sort of way, it denotes that the future is uncertain, and life on this planet is forever changing. But on a more positive note, it is implied that we hold the power to make impactful differences for a better tomorrow by doing our part today, to help save polar bears in the wild. They even share a crucial way we can directly assist in the mission by donating to Polar Bears International.

As Polar Bear takes its place of honor in being the newest addition to the Disneynature family, we can enjoy it along with the countless others in the Disneynature collection this weekend by streaming on Disney+. What could be better than gathering the family together for a wild movie night with a family-focused storyline?