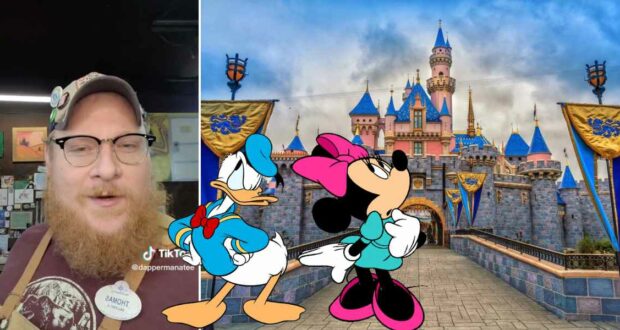 Cast Member Calls Out Guest: “Don’t Let The Turnstile Hit You On Your Way Out”

A Cast Member was not having a Disney influencer’s complaints about the Disney Parks recently and gave her a piece of his mind.

People of all ages from all over the world go to the Walt Disney World Resort and the Disneyland Resort to fulfill their dreams of having that quintessential Disney experience. Whatever Theme Park you choose—Magic Kingdom Park, EPCOT, Disney’s Animal Kingdom, Disney’s Hollywood Studios in Walt Disney World, Disneyland Park and Disney California Adventure in Disneyland—all of them deliver that Disney magic. And the heart of that magic and experience? The Disney Cast Members who work round the clock to make sure every Guest has a smile on their face.

However, recently there have been more reported instances of Guests behaving in unacceptable ways. Be that yelling at fellow Guests or shouting at Cast Members, many feel that rude and entitled Guests are why the Disney Parks are losing their magic. (As opposed to the complaints many have directed to the Walt Disney Company.)

One Disney influencer recently shared her frustrations with how Cast Members were handling the Lightning Lane queue and expressed disappointment at the number of people who were let in from standby compared to Lightning Lane. But former Cast Member @dappermanatee was having none of her complaints.

Check out his video:

The influencer opened by saying, “The line said 75 minutes. I think the most frustrating part was getting up to the front of that line after having waited two hours to get to where the show queue was to be let in with a group of only six other people, and then they let in thirty people from Lightning Lane. I understand that the people who paid for Lightning Lane paid for that right to cut the line, but they paid for the right to cut a 75-minute line.”

@dappermanatee laughed off her complaint. He said, “So you understand that they paid for that, but also they shouldn’t get anything? Got it. You obviously do not understand. This is like somebody saying that if you had a reservation, it should mean nothing if the wait is longer than you expected. Guests can be so full of themselves.”

The former CM continued to acknowledge that while Guests pay a lot of money to visit Disney Parks, everyone else also pays to be there. (This is particularly relevant to this situation, considering @ThemeParkMom, the influencer, is a Magic Key holder and paid significantly less to be there than those who paid for single-day tickets.)

“This Guest is the prime example of somebody that would get a FastPass, be mad if they had to wait longer than the standby line, but loves to complain when they’re in the standby line. Yes, we’re going to send more FastPass when the line gets backed up. They’re called ratios.”

All Guests need to remember that the Cast Members have a system in place to make sure all Guests are getting the experience they are paying for.