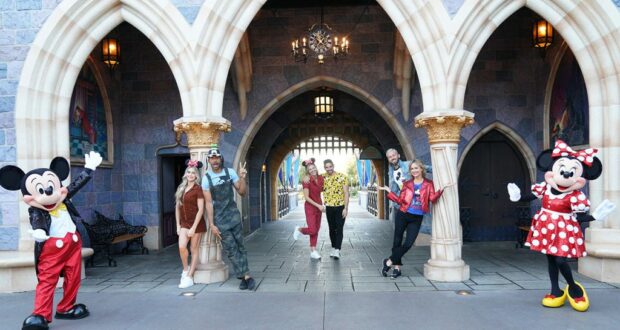 If you love “Dancing with the Stars“ and Disney, then you’ll definitely want to tune in tonight October 11th and tomorrow October 12th at 8 p.m. ET /PT on ABC–because it’s officially “Disney Week” on the show! This season, “Disney Week” is being celebrated with a special “two-night event”, with Monday being “Disney Heroes Night” and Tuesday being “Disney Villains Night.” There are 13 duos left in the competitive show, and the first batch of the thirteen will be performing “choreographed numbers inspired by Disney Heroes” before turning “wicked for performances inspired by Disney Villains”. The dancers and celebrities headed to Disneyland and the Disney California Adventure park, and Disney shared photos of the couples on the Disney Parks Blog. Check them out below!

Things are taking an equally exciting, but tantalizingly devilish turn for the “Disney Villains” evening event! Kenya Moore and dancer Brandon Armstrong will waltz to “Dangerous Woman” by Ariana Grande (which was apparently “inspired by “Snow White and the Seven Dwarfs””) while Olivia Jade and Val Chmerkovskiy will get jazzy with “Remember Me” from “Coco”. This is an unexpected choice for jazz, but one that we’ll be curious to see! Amanda Kloots and dancer Alan Bersten will bring back the Paso Doble for “Call Me Cruella” from the new “Cruella” movie; and JoJo Siwa and Jenna Johnson will dance the Paso Doble to “Ways to Be Wicked” from “Descendants 2”. Next up, Melanie C. and Gleb Savchenko will bring audiences another waltz, this time to “Once Upon a Dream” from “Maleficent”. We can’t wait to hear this hauntingly beautiful version of the song, particularly if it’s the Lana del Rey track from the credits of Maleficent!

Suni Lee and dancer Sasha Farber are bringing in another waltz to “I Put a Spell on You” from “Hocus Pocus”, which is appropriate since Disney is treating Disney Guests to lots of Hocus Pocus treats this autumn. Next is Melora Hardin and Artem Chigvintsev’s jazzy interpretation of “Mother Knows Best” from “Tangled”, which is definitely another underappreciated Disney villain song! Billie Eilish is being featured by Disney once again (after her wonderful concert experience on Disney Plus) as Jimmie Allen and Emma Slater perform a jazz routine to “Bad Guy” by (which was “inspired by “Peter Pan”). Iman Shumpert and Daniella Karagach will tango to “Arabian Nights” from “Aladdin”, which promises to be entertaining and enchanting, while the Miz and Witney Carson are bringing their own tango with “Be Prepared” from “The Lion King”. Brian Austin Green and Sharna Burgess will do another Paso Doble to “He’s a Pirate” from “Pirates of the Caribbean: The Curse of the Black Pearl”, while Cody Rigsby and  Cheryl Burke will Viennese Waltz to “Gaston” from “Beauty and the Beast”. To finish off the villainous night, Matt James and professional dancer Lindsay Arnold will bring everyone a Paso Doble take on “Jungle Book” from “The Jungle Book”.

If seeing the dancers strut their stuff makes you want to learn a few moves yourself, then take a look on Instagram to learn the required dance steps from the show’s two Disney episodes–taught by Mickey Mouse himself! Disney Fanatics are encouraged to share their versions of the dance routine with the hashtag #DWTSMickeyDanceChallenge. Are you a fan of “Dancing With the Stars”? Are you going to learn some of the moves with Mickey?