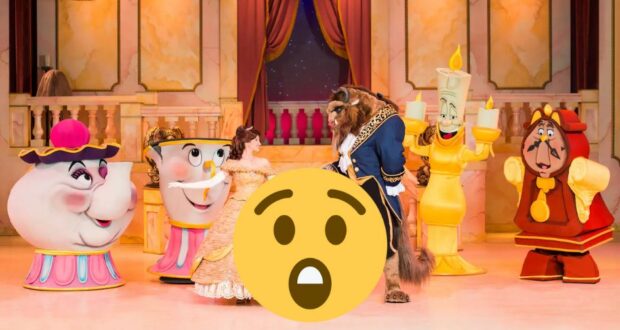 Not all change is bad! We’re excited to learn new changes have been revealed for Beauty and the Beast Live on Stage at Disney’s Hollywood Studios.

It seems like Walt Disney World Resort is bringing back pops of magic all over the Disney Resort. With Harmony Barber Shop reopening at Magic Kingdom Park, and former character dining experiences returning to the Parks and Resort, it’s a good time to visit Disney!

RELATED: New ‘Beauty and the Beast’ Experience Debuts at EPCOT

While Beauty and the Beast Live on Stage returned to Disney’s Hollywood Studios several months ago, the Disney Park show was missing much of its pre-COVID stage performance.

When the Disney entertainment first reopened, no Cast Members were allowed to touch each other and remained 6-feet apart in Disney’s attempt to keep the spread of COVID to a minimum. It was awkward, however, watching Belle and Beast fall in love without a single touch.

RELATED: Beast Loses Head in ‘Be Our Guest’ Restaurant

And while many Disney characters and stage performers returned, there was a lack of excitement on stage due to the performers cut… again, to spread out the Cast Members to prevent illness.

But, FINALLY – as of July 31, 2022, reports are coming in that the FULL Cast is back for Beauty and the Beast Live on Stage… and YES, that includes the colorful “Ice Cream Lady.”

@ThatDisneyBoi took to social media to share a photo along with, “OMG ICE CREAM LADY AND THE REST OF THE CAST IS BACK AT BEAUTY AND THE BEAST LIVE ON STAGE THIS IS NOT A DRILL.”

RELATED: ‘Beauty and the Beast’ Gets Another Retelling

The “Ice Cream Lady” was greatly missed as she was a highlight during the “Be Our Guest” musical piece. She was the ultimate dessert package with his colorful gown and massive dessert-filled hat. We’re happy she’s back in all her glory!

Disney describes the sweet stage show, which is held daily off Sunset Boulevard, as:

“Be Our Guest: The heartwarming tale of Belle and the Beast swirls to life in this lush stage performance. With colorful costumes, gorgeous scenery and the songs you’ve come to love, this sumptuous show will sweep you away—all over again!”