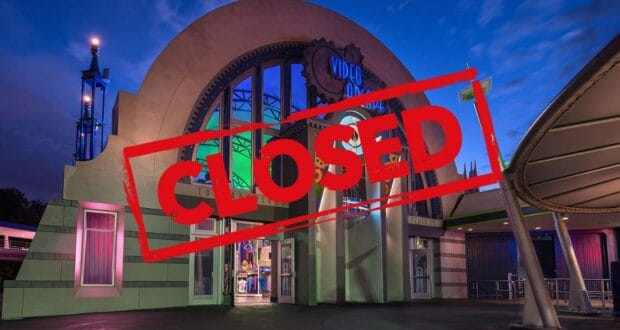 We’ve all been waiting and watching the massive roller coaster project in Magic Kingdom unfold in the Tomorrowland portion of the Park. Now the construction has closed a Disney Park shop indefinitely.

While we have no doubt TRON Lightcycle Run will be the incredible roller coaster we’ve all been dreaming of, the five-year construction project has been a hard one to remain patient through.

First announced at the D23 Expo in 2017, Disney CEO Bob Chapek revealed TRON’s opening would be in time for the 50th Anniversary of Walt Disney World Resort. COVID closures, however, seemingly pushed back TRON’s completion.

We’re seeing excellent progress recently with ride vehicles being tested on the track and the massive canopy lighting illuminating the roller coaster. The ride has finally started to take the shape of its sister attraction, Tron Lightcycle Power Run in Shanghai Disneyland.

According to the official Walt Disney World website, Tomorrowland Light & Power Co. closed on August 1 and will remain in “refurbishment” indefinitely. With the shop serving as the exit and gift shop for Space Mountain, we’re speculating its proximity to the TRON coaster could mean both attractions may exit through this location in the future.

RELATED: Video – Guests Riding Space Mountain Pushed to the End of the Ride With the Lights On!

Currently, Guests exiting Space Mountain are being funneled through a different exit, with some Tomorrowland Light & Power Co. merchandise being available in Big Top Souvenirs in Fantasyland.

We suspect Disney will reopen Tomorrowland Light & Power Co. (possibly with a different name?) at the same time as it reopens Walt Disney World Railroad and holds the grand opening for TRON Lightcylce Run.

We hope to provide a further update with speculation that Disney will further discuss TRON’s opening at the upcoming 2022 D23 Expo in early September.