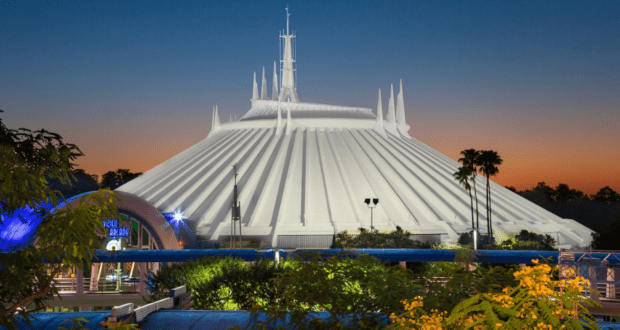 May 27, 2022, marks the official opening of Guardians of the Galaxy: Cosmic Rewind. But on this very same date in Disney theme park history another sensational space-themed coaster celebrated its grand opening. We are of course referring to none other than Disneyland’s Space Mountain, which opened back on May 27, 1977.

But it should be noted that Disneyland’s version of the classic attraction was neither the first nor the final Space Mountain ride rendition. Walt Disney World Resort in Orlando, Florida holds the honor for being home to the original classic, which opened within Magic Kingdom Park’s Tomorrowland on January 15, 1975. Since then, every new Disney Park that sprang up all over the world, with the exception of Shanghai Disneyland Park, has presented its own unique take on the classic Space Mountain attraction.

In total, there are now five variations of Disney’s Space Mountain to date. These include the classic premier presentation at Walt Disney World Resort in Florida, its follow up over at Disneyland Park in California, Disneyland Tokyo’s take on the classic, a hyper-happy deliverance over in Disneyland Paris, and the one that opened at Hong Kong Disneyland as recently as 2005.

While all are comparable to one another, no two Space Mountain rides are entirely the same, and each one has its own individualized callouts. From vastly differing queues to unique track layouts, and as is the case in some Parks, there have even been changing seasonal themes or permanent re-theming altogether.

One thing that remains constant, however, is that Space Mountain continues to skyrocket Guests to new adventures with each and every installment. We’re taking a look at the versatile versions of existing Space Mountain attractions throughout the world, singling out what makes each and every one its own “spacefully” special experience.

As we already mentioned, the iconic classic Space Mountain attraction we all know and love so well today first came on the scene at Walt Disney World Resort back in 1975. Originally there were intentions to bring Disneyland, California’s famed Matterhorn Bobsleds to Walt Disney World Resort’s own Magic Kingdom Park. But due to spacing and design, it just would not have been possible. All the same, there was a great need for a “mountain” thrill ride, and so Space Mountain was eventually conceived.

Related: Video: Guests Riding Space Mountain Pushed to the End of the Ride With the Lights On!

Disney World’s Space Mountain went on to become the very first dark ride rollercoaster to be located completely within an indoor setting. Additionally, it was also the first-ever coaster to be entirely computerized. And because the folks at Disney are suck sticklers for details and accuracy, they even called in the notable Gordon Cooper of the original Mercury 7 astronauts to be a consultant for the new project.

Related: Fire Department Called to Space Mountain – What We Know So Far

Running on two tracks simultaneously known as the Alpha and the Omega, Disney World’s classic Space Mountain delivers on a superbly space-themed adventure set to cosmic music in an all-dark setting studded with stars and other effects. Even though you only ever reach speeds of around 30 miles an hour at most, it still feels like a high-speed blast into space with all the dips, turns, and other climatic offerings. What’s more, having a single-file seating setup where you are never seated next to another rider certainly helps to add an edge to the thrills.

All in all, Space Mountain was a marvelous undertaking when it first premiered and continues to be a marvel to this day. And on another interesting note, it’s worth mentioning that Guests should keep a lookout for the panel labeled as Active Earth Stations in the ride’s queue, where they will notice references to all of the current Space Mountain Attractions today—Tomorrowland Station MK-1, TL Space Station 77, Discovery Landing Station—Paris, Ashita Base—Tokyo, and HK Spaceport E-TKT.

And while more alike than not, as is the case with each and every repeat ride in Disney Parks all over the world, Disneyland’s experience presents many notable differences from the experience at Disney World. And mixed reviews continue to this day across the board as to which ride is better.

Related: OpEd – After ‘Guardians,’ I Am Ready for a Space Mountain Revamp

Both have similar queues as far as quality goes, although their layouts are somewhat structured differently. Disneyland’s version, for instance, takes Guests onto the second level where they can view a suspended spacecraft prior to heading below for boarding.

But the biggest differences can be found in the rides themselves and all the elements that go into the undertaking. The two most noticeable callouts are of course the tracks and the seats. Whereas Disney World offers up two simultaneously running tracks, Disneyland has just one. But Disneyland does offer a two-seat setup as opposed to Disney World’s single-file format, which some have arguably claimed makes for a much more comfortable ride.

Some Guests have also commented on the fact that the track in Disneyland is smoother. But for thrill-seekers who like all those unexpected surprise jerks and dips, this callout by no means makes for a better ride. It should be noted, however, that the Space Mountain tracks of today are not what was originally laid out in 1977. The ride closed briefly back in 2003 with a celebrated relaunch in 2005.

In 2015, Disneyland did something original in offering up a temporal Star Wars retheming of its Space Mountain attraction in what was called Hyperspace Mountain. While certainly not the last to do so, they were in fact the very first Disney Park to change the Space Mountain ride up with seasonal layouts and have done so at numerous other times as well, including their Ghost Galaxy around Halloween. As of May 2022, Hyperspace Mountain has again returned to Disneyland Park temporarily.

The first international inception of the classic Space Mountain experience came about with the opening of Tokyo Disneyland in 1983. While no two Space Mountain rides are exactly the same, Tokyo’s version certainly favored Disneyland’s over the one at Walt Disney World’s Magic Kingdom Park in track layout, seating, and other elemental touches.

The ride remained vastly unchanged up until 2006, when it received a much more futuristic makeover. By 2007 the new riding experience offered up plenty of new effects, along with an updated queue. In general, it just offers up a fresher, more modernized feel.

Earlier this year it was announced that Space Mountain at Tokyo Disneyland will again be receiving an update, only in this case it will be an entire rebuilding on a grand scale. The current experience will officially close by 2024. As part of the Park’s massive plans for an entire overhaul of Tomorrowland, Space Mountain will be rebuilt as an entirely different experience we can’t help but be excited for!

With the opening of Disneyland Paris in 1995 came the fourth and arguably most diverse of all Space Mountain variations. And the differences have only become even more defining in recent years.

In the beginning, Disneyland Paris longed to have a Parisian take on the popular Space Mountain attraction, but also longed to feature various other attractions in what was to be their envisioned Discovery Mountain. But with a budget that didn’t meet with much of the original concept, alterations were imminently made, largely cutting down the concept to be one focusing on Space Mountain specifically. Even so, the Paris adaptation made way by offering up plenty innovations to the original riding experience.

Notably, this would go on to become the fastest version of the ride, clocking top speeds at 44 miles per hour and would also be the tallest one at that. It also broke free from the mold of being 100 percent indoors. And thrill-seekers take note that this is the only Space Mountain installment to go upside down.  Another notable credit to the ride is that for a time it was the first-ever full circuit launched roller coaster in existence.

When it first opened, the Disneyland Paris ride was known as De la Terre à la Lune—themed after the famed Jules Verne novel titled From the Earth to the Moon (in English). The Vernian motif carrying over into the queue also offered more of a steampunk feel that broke with the more usual Space Mountain offerings at other Parks, which incorporated ultra-modern space-age showcases.

In 2015 the ride was reimagined as Space Mountain: Mission 2, taking Guests beyond a journey to the moon in an all-immersive thrill through the universe. Mission 2 remained the standard for more than a decade when another change took effect in 2017—the Park’s permanent adoption of the Hyperspace Mountain Star Wars theme first presented at Disneyland, California seasonally. To this day, the Paris Park attraction remains a contested favorite as Star Wars: Hyperspace Mountain.

Disneyland Paris isn’t the only Park to undergo a permanent Hyperspace Mountain reimagining. Hong Kong Disneyland did the very same thing back in 2016, more than a decade after what was the latest version of Space Mountain to debut in any Disney Park.

Those familiar with Disneyland, California’s refurbished track will find a lot of familiarity with Hong Kong’s track layout, although it should be noted that there are still overarching differences to paint this attraction in an entirely different light.

The queue for this attraction is admittedly smaller than those of other Space Mountain makings. Although, it should be mentioned that since permanently taking on the Star Wars Hyperspace Mountain theme the queue has been redone to feature a full-scale replica of X-Wing as well as a character meet and greet area.

Space Mountain is an original Disney attraction that continues to reach and exceed new heights in popularity as a time-tested classic. And its legacy as a favored futuristic feature will be forever adapting with the changing times offering up plenty of new “space” to grow with.