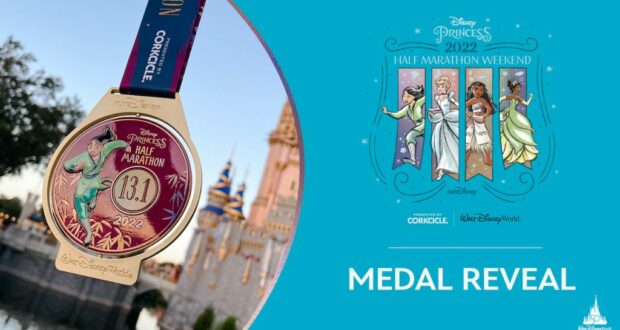 Disney princesses already get a lot of special attention from Disney fans and Disney Fanatics–but lately they’ve been getting lots of extra royal treatment with events like World Princess Week or the international Ultimate Princess Celebration, and now there’s more Disney princess treats to enjoy! If you’re running in the 2022 Disney Princess Half Marathon that’s presented by CORKCICLE and running from February 24th to 27th of next year, then you will literally be in the running to get some absolutely gorgeous one-of-a-kind Disney princess medals! These medals were just announced, and Disney intends for these fun medals (and the rest of the marathon) to ensure that “runners will be propelled to finish triumphantly and celebrate their very own happily ever after”.

The medals will feature Cinderella, Tiana, Mulan, and Moana. They are also perfect for anyone who’s been paying close attention to Walt Disney World’s special 50th anniversary celebrations, because the anniversary’s signature EARidescent design will also be on the medals!

If you’re committing to the half marathon, then you’ll definitely want to “run swift as a coursing river” to get this beautiful Mulan medal, and if you’re seeing ‘how far you’ll go’ in the Disney Fairy Tale Challenge to complete 19.3 miles, then you’ll be celebrating with Moana!

If you can’t make it in person, you can also sign up for the Virtual 2022 Disney Princess Half Marathon Weekend presented by CORKCICLE! You’ll get your medal or medals even if you do the virtual run, according to the website. Spots are definitely ‘running’ out for the in-person runs, though, so sign up on runDisney.com as soon as possible. Disney is also encouraging everyone who has signed up to tag @runDisney on Facebook, Twitter and Instagram with the hashtags #PrincessHalf or #DisneyWorld50.

Disney Princess Disney Princesses half marathon UltimatePrincessCelebration WorldPrincessWeek 2021-10-18
Sharon
Previous: Disney-Inspired Ways to Make A Dog’s Day
Next: Disney Postpones The Release of 11 Movies, And 8 Of Them Are Marvel Blockbusters