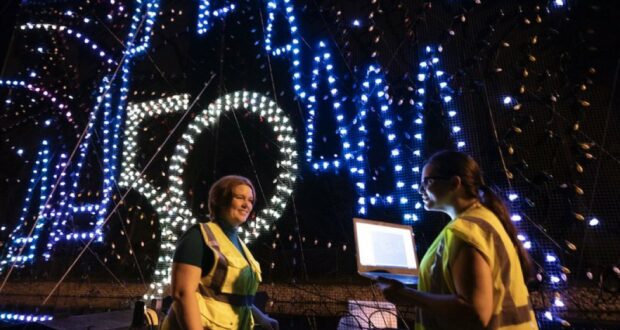 Walt Disney World has already planned a wide variety of special offerings to celebrate its 50th anniversary on October 1st, including two restaurant openings, a ride opening, a new France in EPCOT, new merchandise, special sculptures, special decor, special Cast Member name tags, and a live TV special starring the likes of Whoopi Goldberg and Julie Andrews! Now, the Magic Kingdom crowd-favorite “Electrical Water Pageant” is also getting to join in the fun, with “new celebratory scenes featuring a version of the celebration anthem song, ‘The Magic Is Calling'”. The new version of the song will “bookend” the aquatic parade at its beginning and its end each night as it sails through the Seven Seas Lagoon in front of the Disney resort hotels. 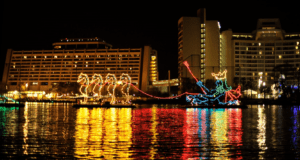 The Electrical Water Pageant joins the fun of “The World’s Most Magical Celebration” with new celebratory scenes featuring a version of the celebration anthem song, “The Magic is Calling,” bookending the full traditional show as it sails nightly. #DisneyWorld50 pic.twitter.com/fR5r0jnZna

Walt Disney World shared the news on Twitter in the Tweet above, and Disney Fanatics are already expressing excitement about the addition to the show in Tweets like the one below.

The Electrical Water Pageant is getting what it deserves. This is awesome. pic.twitter.com/MPEEtHeznu

There are several new updates to shows happening at Walt Disney World (including an update to Finding Nemo: The Musical in the Animal Kingdom, updates to Expedition Everest: Legend of the Forbidden mountain, Mickey’s Philharmagic, and the upcoming Princess and the Frog ride), so this addition to the Water Pageant isn’t unexpected, but it’s still a pleasant surprise. Disney Guests have also been enjoying Space 220, the restaurant that just opened this week, as well as the 50th anniversary scultpures that have taken residence all over the parks (and that will be there for the next eighteen months). Have you seen the Electrical Water Pageant before? Are you heading to Disney World for October 1st, or living vicariously through the live TV showing of the “Most Magical Story on Earth” or through the Disney Institute’s new online course “50 Years of Magical Learnings from Walt Disney World Resort”? What else do you think Walt Disney World is going to unveil for the celebration? 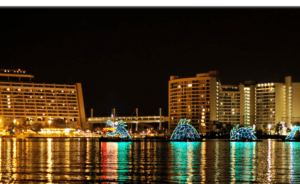