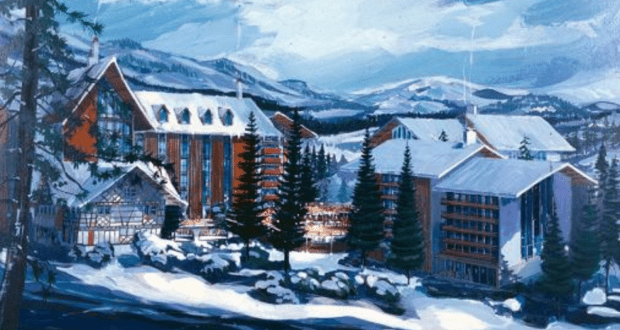 Once upon a time, the existing Mineral King section of today’s Sequoia National Park today was slated to become the site of the Walt Disney Company’s next big venture. Disney had already been vastly successful with its revolutionary Disneyland Park in Anaheim, California, and had additional plans in the works for establishing a larger, similarly minded East Coast follow-up. But by 1965, they were at it again, taking another move away from show business—this time, toward snow business instead. 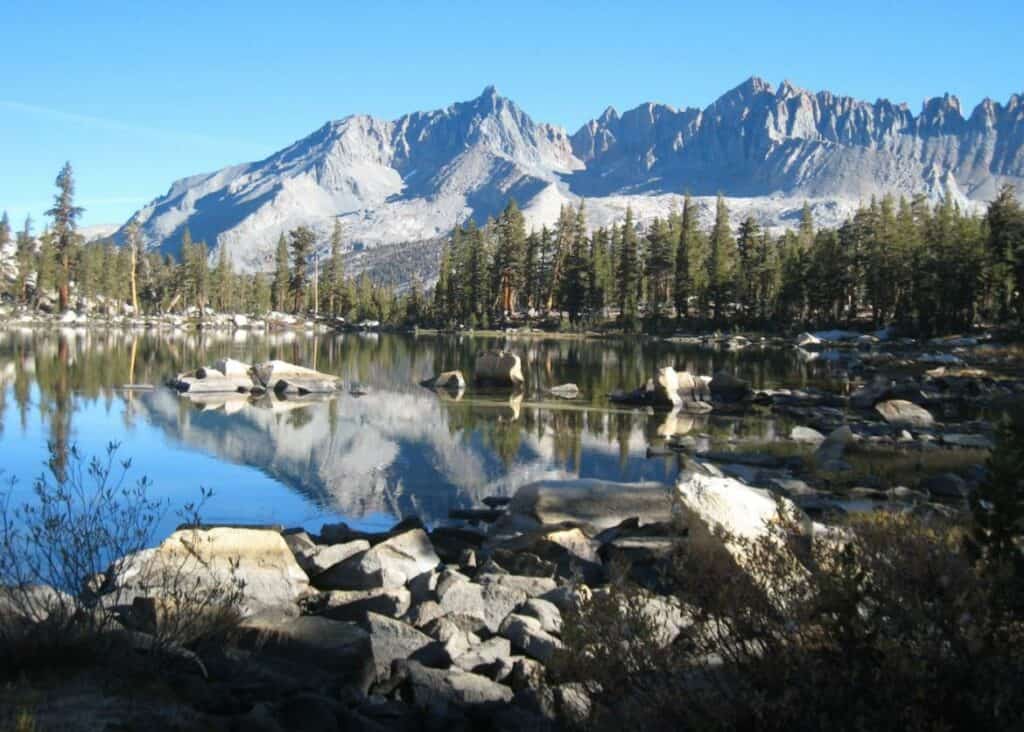 The goal was to create the ultimate family-friendly ski resort destination in California. Walt Disney, who had a fondness for family ski outings himself, decided on the outlying area of the seemingly mystical Sequoia National Park both for its convenient, equal distance from such locations as San Francisco and Los Angeles as well as its enchanting fantasy likeness. He especially felt that the latter would work well in embodying the heart of Disney magic in nature. So, the plans were conceived, the attractions were envisioned, and the budget was set. All was ready to go in the creation of a top-quality Disney-operated ski resort. 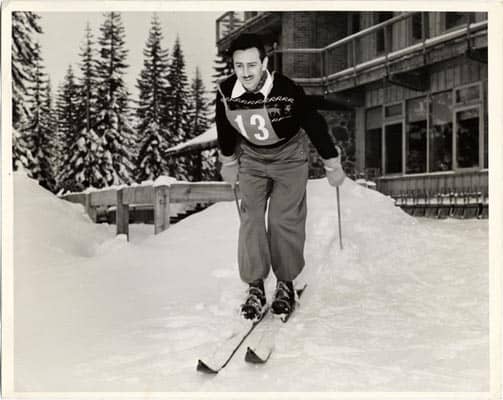 While in retrospect it just wasn’t meant to be, there’s still so much to be said about the unrealized concept behind Disney’s Mineral King Ski Resort, including the several unique ways in which the once-hoped-for attraction still managed to leave a lasting legacy. Here is an extensive look back at Disney’s lost plans to build what would have likely gone on to become the best family ski resort ever.

Related: Ungranted Wishes: The Disney World Attractions That Never Were

The Plan in Place

The year was 1965, and the Forest Service had announced a call for prospective proposals to be considered for the development of a ski resort within the Mineral King valley section of the (then) Sequoia National Forest. The Walt Disney Company’s imagined plan was among the grand total of six submitted proposals to be considered. And it goes without saying that theirs beat out all the rest.  It was a bold idea laden with high expectations, but if anyone could do the seemingly magical, Disney could. A direct quote taken from the Spring 1966 issue of Disney News teased the coming-soon ski resort with the following statement:

Walt’s plan for the picturesque area, located about equidistant from Los Angeles and San Francisco, provides for year-round recreational activities by people of all ages and athletic abilities. When Walt Disney first laid eyes on the area comprising Mineral King, he proclaimed that it was one of the most beautiful spots he had ever seen. He made clear his intentions to keep it just as it was with all of its pristine, unbridled beauty intact. And that is why the impressive plan called for a completely contained Alpine Village setup consisting of numerous year-round recreational pursuits and various onsite amenities to boot.

The focus would be heavily placed on alpine sporting during the winter months and more on sightseeing and communing with nature during the warmer seasons. The various callout features of Mineral King would include multiple ski lifts and gondola systems, recreational ice-skating, a golf course, tennis courts, various shops, pools, two hotels and other lodging facilities, a conference center, 10 different dining locations, a chapel, a movie theater, and of course, various ski runs spanning four miles with impressive drops. Related: PHOTOS: Look in on the Only Disney World Park Still Closed

So as not to detract from the natural surrounding beauty of the area, the design would implement constructs placed within various camouflaged vantage points. This is not unlike the various techniques Disney Parks are known for utilizing today (think about those discreet animal boundaries at work within Kilimanjaro Safaris at Animal Kingdom Park in Disney World).

A number of less attractive facilities that would be necessary for visitors but otherwise an eyesore to look at were to be built underground. But it was Disney’s concept for handling traffic that would be the hallmark in retaining the undisturbed natural setting he so envisioned. The resort itself would prohibit any passenger vehicles from entering the grounds.

Instead, both day-trippers and visitors set on an extended stay would utilize an 8-10 story parking garage downslope with a capacity to house between 2,000 and some 3,000 automobiles. They would then take a provided mode of transportation up to the main resort. But in order to bring Guests even to that point, there would be a costly call for revitalizing the inadequate existing route by building up a new all-weather road. 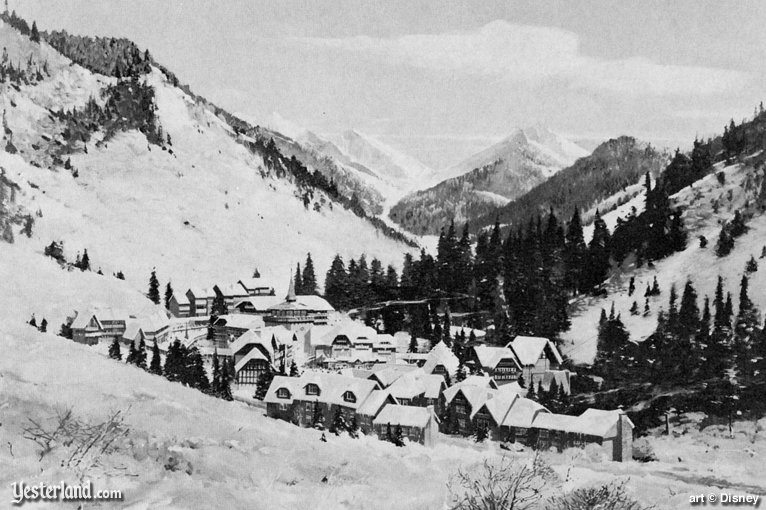 Related: Behind the Scenes at Kilimanjaro Safaris in Disney’s Animal Kingdom

The Walt Disney Company projected that all the would-be revenues earned from visitor services from just the first decade of Mineral King Resort’s operation would bring in a grand total of $600 million. The Resort would draw in an estimated 2.5 million visitors annually, with 800,000 of those being from out of state.

Costs and considerations for the project set the price at $35 million with $25 million of expenses going toward the needed establishment of new road construction alone. The United States Forest Service granted Disney a three-year preliminary permit to come up with a well-organized, comprehensive plan for devising their all-weather 25-mile highway route. Then they’d establish a more permanent 30-year permit. Early on in the game, there were many who were fully on board with seeing Disney’s Mineral King Ski Resort come to fruition. Even the Sierra Club, a later leading source of opposition against Disney’s planned project, had formerly backed a plan for establishing a ski resort at Mineral King earlier in 1948. Additionally, there was a lot of eager enthusiasm across the board just waiting to see the latest intended magical undertaking to come out of the Walt Disney Company. 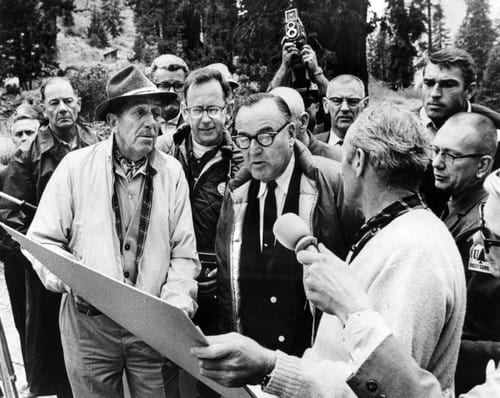 Despite Disney’s promised approach to preservation in bringing forth the new Mineral King Ski Resort, there were still several vocal activists from the very start who were not in favor of the pending project. From petitioned letters to federal officials to staged “hike-ins” and other protests, there was a lot of opposition that emerged during the various stages of the project. Things escalated even further when on December 15, 1966, Walt Disney died unexpectedly. It was just shy of a year from when the proposal for Mineral King Resort was accepted. 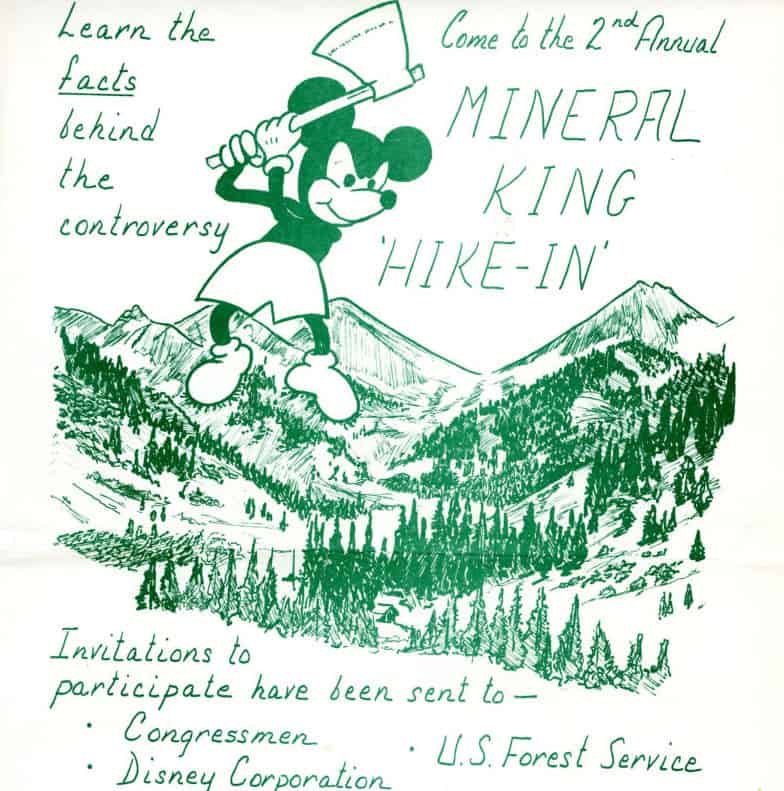 At that time, it was left up to Disney Imagineers to proceed with the project, which had already moved away from some of Walt’s earlier renderings by that time. Whether or not the fact that Walt was no longer the one calling the shots played a role or not, by the late 1960s mounting tensions and increasing opposition came to a head, resulting in various legal challenges in addition to many ugly back and forth battles.

Controversially popular or not, the Walt Disney Company remained poised with its plan to move forward with establishing the Ski Resort. The intended opening date was set for the 1973 ski season. The Official Death of the Project

While plans for Mineral King Ski Resort’s remained in place, very little was mentioned about it for years in the shadow of the more ambitious grand opening of Walt Disney World Resort in Florida. But by the time they were ready to revisit the projected plans, the company had to considerably scale down in cost and many of the intended amenities, as Walt Disney World Resort had already exceeded its originally intended $70 million budget. The new budget for Mineral King would stand at just $15 million.

Another significant deduction to the original plan saw the removal of the all-season access road by California State Legislation in 1972. Taking the place there would have to be an alternative access method that would fit with a more environmentally friendly objective—a passenger train leading to the resort.

But the remaining dream for Mineral King had already been reduced to just a fragmented shell of Walt’s once wonderful, intended vision. So, by 1978 they finally pulled the plug, and the Mineral King Ski Resort project officially became defunct. Since then, only the briefest reconsiderations for a tentative ski resort have ever reemerged — such as a short-lived idea to establish one at Lake Tahoe. Those plans too ultimately ended up on the chopping block. 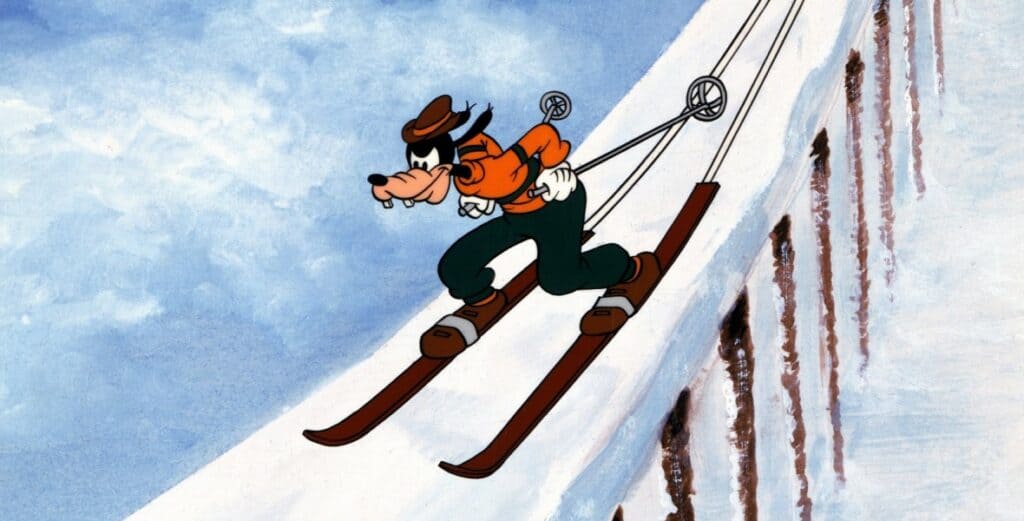 Related: What Happened to Everything “Coming Soon” from Past D23 Events?

Most folks today are largely unfamiliar with Disney’s now obscure intentions to establish a family-friendly ski resort. What is ironic, though, is that even though the plan for Mineral King fell through, several would-be resort incorporations went on to prevail in all-new ways.

Even some of today’s most avid skiers probably don’t realize that we have Disney to thank for the commonly used piste grading scale. This color-coded symbols system, which is such a mainstay at ski resorts all over North America and sometimes in other locations around the world, was first developed as part of the original plan for Mineral King Ski Resort.

Disney assigned a simple green circle to signal the easiest course runs, a blue square for intermediate-level pursuits, and both a black diamond and double black diamond designation for more advanced or expert-level endeavors. Seeing the need for a more universally accepted system such as this, the National Ski Area’s Association officially adopted the Disney piste grading scale in 1968. 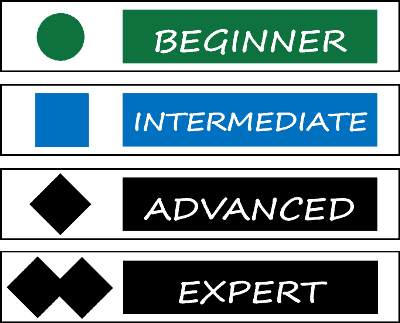 Are you hungry to know what some of the proposed dining establishments would have been like at Disney’s Mineral King? Well, we do have at least one very telling indication of an intended interactive dinner show experience. Did you ever feel that the Country Bear Jamboree attraction at Walt Disney World Resort (formerly also at Disneyland Resort) seems a little out of place in such a hot and humid setting?

That’s because they were ultimately built to be the animatronic performers at a wonderfully planned family-friendly mealtime feature at none other than Disney’s envisioned Mineral King Ski Resort! Additionally, many other once considered incorporations have since found their way to Disney Parks as well, including some of the considered cabin-like architectural building structures now in Frontierland. 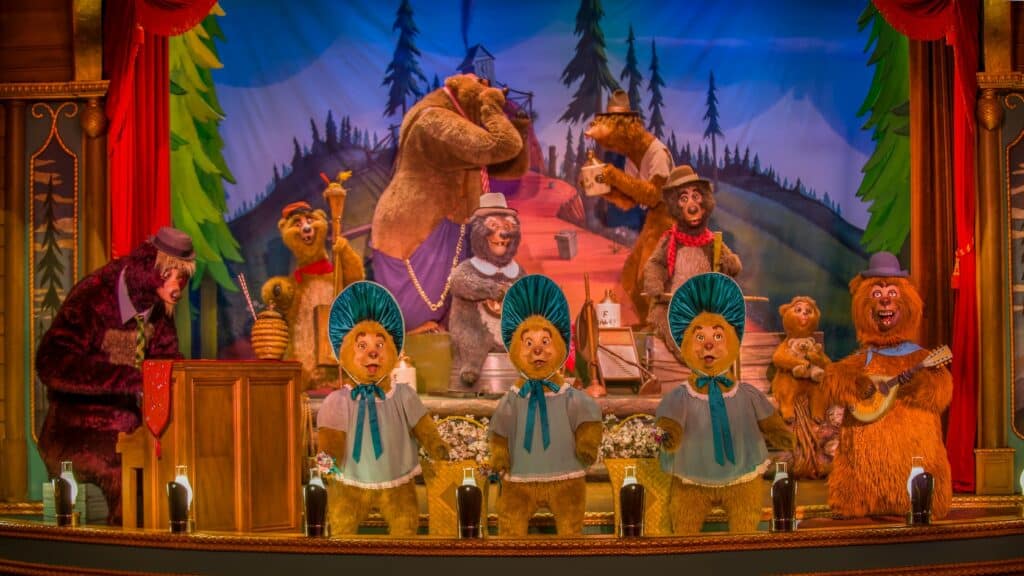 Related: Permit Filed: Could Changes Be Coming to the Country Bear Jamboree?

When we consider all that Disney has done over the years — establishing multiple theme parks around the world, dreaming up various resorts and destinations to escape to all over the globe, and creating so much happiness in the way of entertainment —  it’s amazing to think that they were at one time considering a ski resort destination as well. And even though all those plans have been laid to rest, we can’t help but wonder what the future may hold. It was a one-time dream of Walt Disney himself and he knew firsthand, better than anyone else, how to make dreams come true.