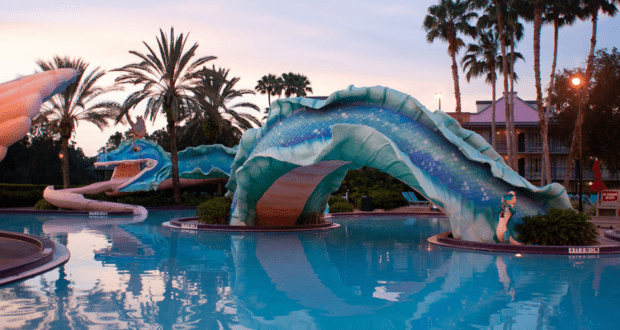 When people make the decision to stay at a Walt Disney World Resort, it could be for any number of reasons. From the specific theming at a particular accommodation to the many perks and amenities they provide. Sometimes cost plays a prominent role as the deciding factor. And while Disney delivers on a diverse lineup of Resort options, one commonality that all lodgings proudly boast is providing at least one swimming option for Guests to enjoy.

But with Disney swimming isn’t just swimming; it’s an overall immersive experience that follows a well-cultivated plot, and is so entirely fine-tuned by countless thematic elements. Arguably all pools on location go above and beyond the usual poolside plunge, but here is our list of eight great examples that rank the most optimal in spectacular swimming experiences to be had.

It’s an all-out Mardi Gras celebration taken to the waters at this fine “lagoon” pool, on location at Disney’s Port Orleans—French Quarter. An impressively themed zero-entry pool that boasts a most befitting bayou appeal, Guests will enjoy everything from the clamshell jets to the jazzy alligator figures.

But the pool’s most popular feature by far is undoubtedly that stunning 51-foot serpentine water slide that leads you on a high-speed traipse downward, exiting rapidly via the serpent’s tongue and crashing into the refreshing waters below. Other features to be found around the pool area include a whimsical watery play site for children and even a whirlpool jacuzzi. 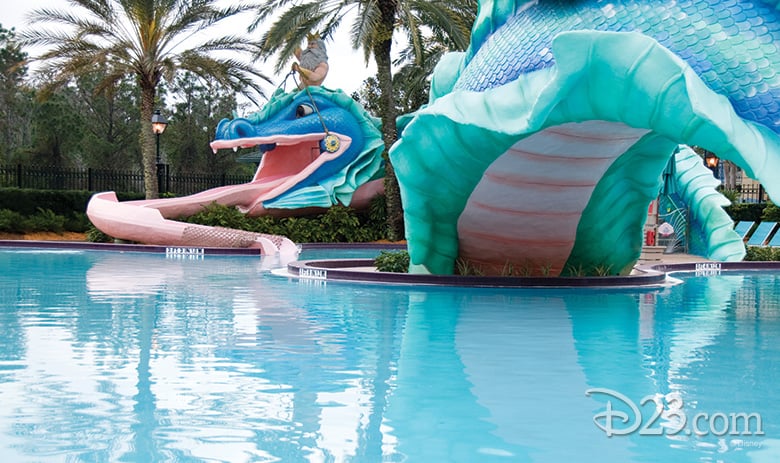 Related: Your Guide to Celebrating Mardi Gras at Disney World

It’s easy to get lost in all the glory of the Lost City of Cibola Pool at Disney’s Coronado Springs Resort. While each of the Resort’s three settlements all boasts its own leisure pools, this one is, hands down, the center of all the action. From its massive 50-foot replica of a Mayan pyramid to its stunning 123-foot-long waterslide complete with spitting jaguar, this is definitely the place you’re going to want to take a dip in while staying on Resort grounds.

And in addition to being the uncontested center of attention in the way of on-property pools, it also happens to be the central focus of the Coronado’s encompassing Dig Site—a diverse surrounding area with a host of outdoor recreational endeavors, including what is even the largest hot tub on any Walt Disney World property among other things. 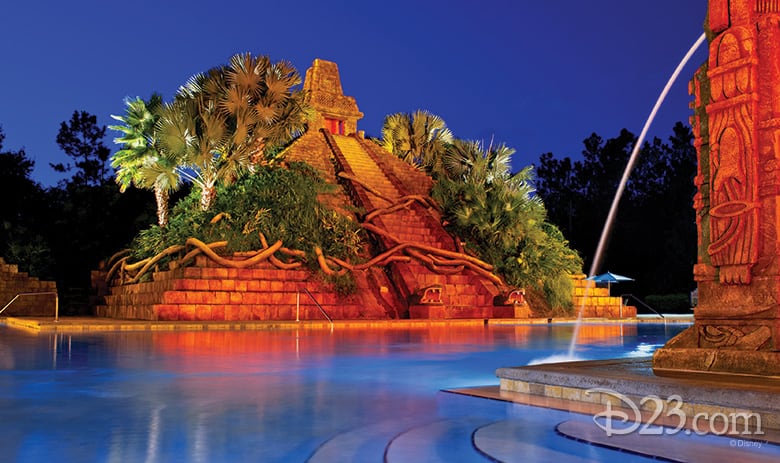 Being a massive Walt Disney World Resort, Disney’s Animal Kingdom Lodge boasts two exceptional plunge-worthy pleasantries. First, there is the ever-lush Uzima Springs Pool. Spanning a grand total of 11,000 square feet, this zero-entry, 234,980-gallon watery wonder embodies a true tropical oasis in theming, with its surrounding palm trees, sandy beach layout, and other thematic elements at play. Topping it all off is an impressive, 67-foot waterslide. Perhaps even more impressive than the waterslide at Uzima Springs is the one at Samawati Springs Pool—the Resort’s other crowning glory. Another expansive zero-entry exceptional endeavor, this one spans a grand total of 4,700 square feet and contains just under 120,000 gallons of wet wonderfulness. Additionally, there is a nice little splash area right beside the pool. Whirlpool hot tubs can also be found in close range of both pools. While there’s plenty to be said about the intricate theming and details at Boulder Ridge Cove Pool—the other, the more leisurely pool at Disney’s Fort Wilderness Lodge, it’s really the livelier Copper Creek Springs Pool that packs the most action. In keeping with the Resort’s bucolic appeal, the pool exudes an essence of splashing around within a wooded watering hole, surrounded by rocks with other natural marvels encompassing the scene.

And in keeping things wild in the truest sense, there is a fast-paced, wonderfully themed 67-foot waterslide built into the rocky terrain. Other fun follies to delight in within the pool area include a nice play area designed for kids to splash around in and both hot and cold whirlpool spas. 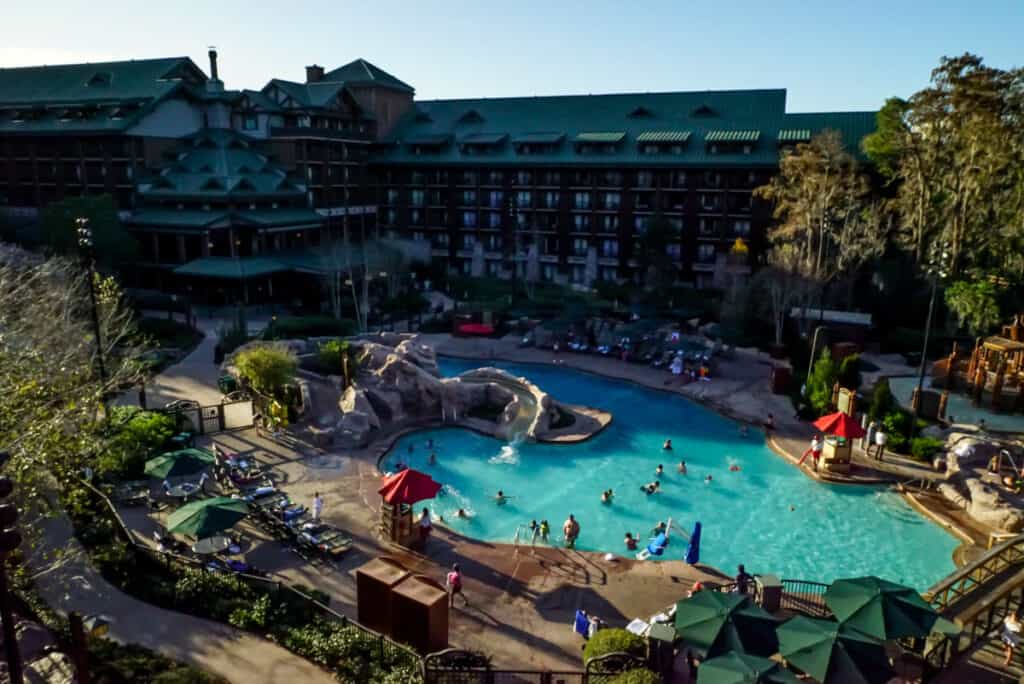 If you just “lava” the idea of taking a warm-watered swim through a volcanic tropical island-like setting then you’re going to love the Lava Pool over at Disney’s Polynesian Village Resort. A large, zero-entry swimming pool inspired by the South Pacific, the elaborate volcano with its refreshing waterfall already adds many awesome touches to set the mood, but it’s that 142-foot-long waterslide that delivers on the ultimate eruption of enjoyment to be had. 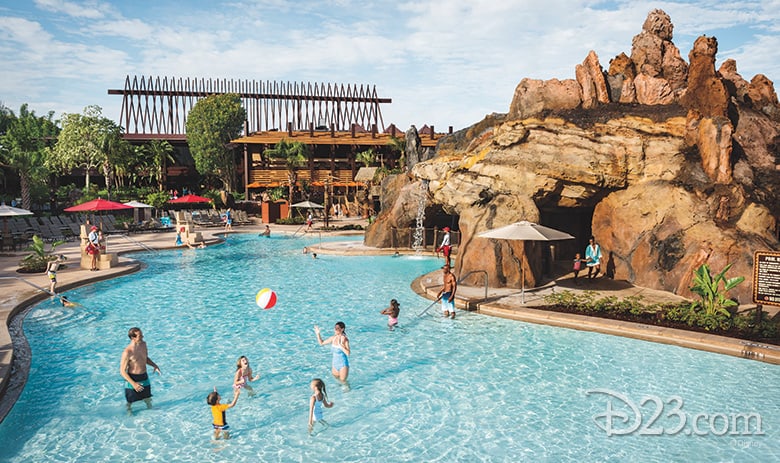 While there are many opportunities to take things easy at Disney’s Caribbean Beach Resort with their five leisure pools, it’s their Fuentes del Morro Pool that really brings on all the swashbuckling action. This zero-entry pool combines the pristine beauty of paradise that’s so inclusive with the Caribbean with a more action-based pirate overtone. It’s almost enough to make you feel as though you are in a flooded Spanish fortress. From cannons that eject water to two bold waterslides—one even measuring a thrilling span of 102 feet in length—it’s no wonder that this is the Resort’s most premium prospect to pillage. While Disney Value Resorts seldom succeed in beating out those accommodations of a more elevated status, Disney’s Art of Animation has quite a couple of quality features that set it apart from other Resorts in this category. It can even be argued that some of its attributes even rank more desirable light than some Moderate and even Deluxe distinctions. And one such defining attribute is, of course, the Big Blue Pool.

In fact, this massive zero-entry pool, which is themed after Disney-Pixar’s Finding Nemo, even holds the record for being the largest one on any Disney World Resort property. Another fun and fascinating feature about it is the underwater sound installation that lets you hear the Resort’s music even as you swim below the surface. Other notable features that make this pool stand out are of course its larger-than-life icons and interactive onsite water playground. This optimal option, available to Guests staying at both Disney’s Beach Club Resort as well as Disney’s Yacht Club Resort is hands down, the best of the best among Disney swimming pools. In fact, there are some who may even argue that it is far more than “a pool” given its massive three-acre embodiment and multiple elemental features. Disney describes it as a “water wonderland,” which is perhaps more befitting given the fact that it really seems to be multiple pools all interconnected.

There’s the lazy river element, great for floating along in an inner tube, a nice little Shipwreck-themed section, and even a sanded bottom sector. And let’s not forget the three whirlpool spas in addition! And if Stormalong Bay didn’t already deliver on the zenith of all Disney delights, they even feature a strikingly high 230-foot waterslide to boot! It just doesn’t get any better than Stormalong Bay and there aren’t enough words to do it justice. 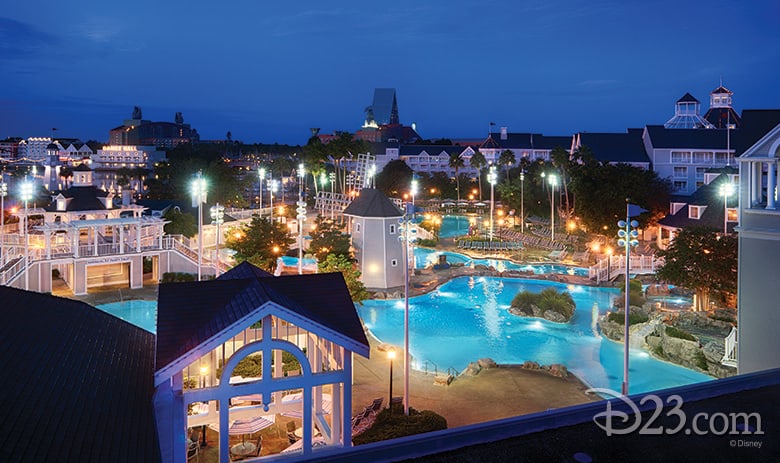 Related: Tips for Having a Beachy Keen Time at Disney World

Do take note that while Guests may visit various Resorts to enjoy such exclusives as dining, shopping, and other recreational extras, pool hopping is prohibited. Resort Guests may only take the plunge among their own accommodation’s various options. So perhaps you should let the pool you want to dive in be the deciding factor on where you end up staying? That’s up to you.

There are so many wonderful ways to make a splash throughout various other Walt Disney World accommodations in addition to these great eight suggestions. From the quieter leisure pool options that we only just touched on to docile kid-friendly offerings, swimming remains one of the most popular recreational undertakings to be found at Disney Resorts. So, it isn’t at all surprising to learn that they go above and beyond in making such experiences as magical as possible. That’s just the Disney way.