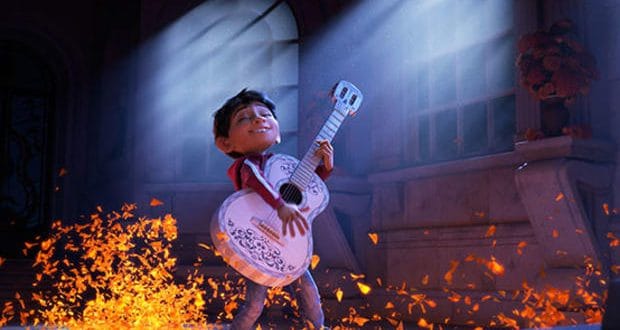 While many of us are currently consumed with thoughts about Halloween, there’s another more popular holiday that’s celebrated in Mexico as well as in various other Spanish-speaking nations throughout the Americas. It’s el Día de los Muertos, or “Day of the Dead” in English. Officially beginning each year on the eve of October 31st and lasting through November 2nd, this is a beloved cultural celebration that honors departed loved ones. It takes the form of a festive tradition held onsite in graveyards, laden with food, entertainment, and fellowship with the entire family (those who are living and deceased alike). This time-honored tradition plays an integral part in the overall plot of Disney-Pixar’s hit movie Coco from 2017, and a lot of diligent background research was involved in order to ensure absolute accuracy in almost every aspect of the film. That being said, Coco is an animated masterpiece that stands out as a motion-picture marvel in so many ways. In recognition of this fact, as well as to honor the tradition of el Día de los Muertos (done the Disney way), we’re presenting you with a whole host of fun facts centered entirely around Disney-Pixar’s Coco.

While Pixar movies are notorious for taking a long time to develop, Coco takes the cake. It took a grand total of six years, from start to finish, for this one. That’s because there were so many details that went into making the movie, and getting everything just right involved an extensive amount of background research into Mexican culture and Día de Los Muertos customs and traditions. The team also spent a lot of time in ‘title limbo’ just trying to come up with a suitable name for the film.

Viewers may observe the ornate, orangey presence of one particular flower throughout the film—the only one that appears to be in bloom even in the Land of the Dead. It’s the Aztec marigold, known more familiarly today as the Mexican marigold or the cempasúchil/cempazúchitl. These flowers are very important in Día de Los Muertos celebrations as they fulfill the role of guiding the spirits of departed loved ones on their return quests.

Did you know that Dante, Miguel’s faithful dog friend and companion, is actually based on a real dog breed? He is the Xoloitzcuintli/Xoloitzcuintle, alternately known as the “Xolo” for short or otherwise the Mexican Hairless. Famous for their almost complete baldness and other odd characteristics (like frequently missing their teeth), this is actually the national dog breed of Mexico. As another interesting side note, Pixar animators reportedly brought actual, real-life Xolo dogs into the studio in order to observe them for accuracy in the illustration process.

Related: Only 1 In 50 Disney Fans Can Name These 18 Disney Dogs

Did you know that many deceased historical figures from Mexican history make appearances in Coco? Some of the famous figures you may recognize include actress/singer Maria Felix, renowned actor/wrestler El Santo, actor/singer Jorge Negrete, actor/singer Pedro Infante, actor/comedian Cantinflas, and the very famous painter Frida Kahlo.

6. A Non-Musical With Music

While many Disney films are designated musicals (in which key characters have moments of falling into synchronized harmony at various times throughout the story), Coco is by definition not a musical. Yet it is a non-musical that centers around music all the same, which puts it into a unique category all its own. The music featured in Coco contains traditional influential sounds that were characteristic of the Golden Age of Mexican Cinema. These include baladas, son jarocho, huapango, and ranchera genres.

Related: Behind The Scenes Look at “Coco” Scene at Mickey’s PhilharMagic

If you’re a real-life guitarist or have a working knowledge of the featured instrument, then it may thrill you to discover that anytime you see one of the on-screen characters playing the guitar, they are in fact hitting all of the right notes! Watch for yourself and observe the careful hand movements and strumming of strings in complete synchronization with the music being produced. How was such a feat achieved? Animators relied on footage taken from actual musicians who were performing the featured songs with cameras attached to their guitars. It’s also worth noting that various live subject references were used in many other instances throughout the film as well, in order to more accurately mimic movements during the creation process.

Coco may be a fictional film, but many places depicted in the movie were inspired by actual existing locations. The protagonist’s hometown of Santa Cecilia, for instance, was based on real-life Santa Fe de la Laguna, located in Michoacán. Animators also took special note of common architectural styles and colors while envisioning various buildings and other structures and edifices to be incorporated into the film. An extensive examination of Mexican architectural heritage and history helped shape their exceptional depiction for the Land of the Dead, as portrayed in the final product.

Earlier we mentioned that filmmakers had a particularly difficult time in deciding on what the final title of this film was going to be. They at last settled on “Coco,” which was the name of the primary protagonist’s great-grandmother. But that’s not to say that the name stuck universally with every nation’s release. In Brazil, for example, the movie was renamed Viva, owing to the potentially confusing connotations and meaning behind the word “coco” in Portuguese. When accented, the word “cocô” translates to mean “poop.” When unaccented, the definition is that of a coconut. Because neither reference would have been appropriate for the movie, it seemed a most befitting change to make.

Any Disney fan who watches Coco will undoubtedly notice all of the Disney and Pixar references from other films that show up in it. Some of these incorporated cameos include piñatas in the likenesses of Woody and Buzz Lightyear from the Toy Story franchise, Mike Wazowski from Monsters, Inc., a poster for Incredibles 2 (as skeletons), Finding Nemo/Finding Dory character sculptures, and many other subtleties, including Cars-themed sneakers (if you look closely). Observant Disney fanatics may also notice that the door to the office in the Land of the Dead is marked as  “A113,” which is the classroom number at the California Institute of Arts where many Disney and Pixar animators alike have been trained.

Coco premiered, appropriately enough, in Mexico during the 15th Annual Morelia International Film Festival in October of 2017, where it instantly soared to #1 box office status. After opening worldwide, Coco saw global popularity, especially in China, where it grossed a surprising $154 million during the first four weeks of its release in comparison to the United States where it made $150 million in the first month. It then went on to become the highest-grossing animated film in Mexico and in all has earned well over $800 million at the box office. The 90th Academy Awards honored Coco with the Oscar for Best Animated Film of 2017.

We hope you’ve enjoyed learning more about this most interesting of Disney-Pixar works. As you can see through the vast dynamics incorporated throughout Coco, it’s so much more than an animated work of entertainment; it’s a unique, cultural representation of heritage, family, and traditions that never die.