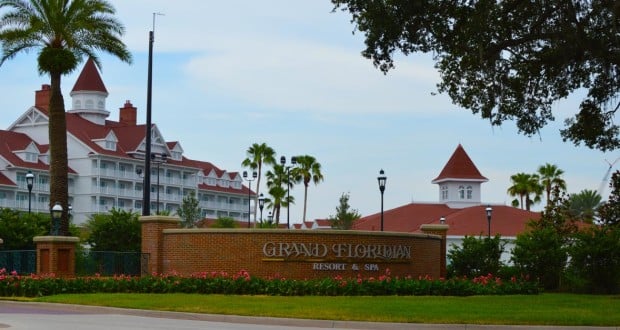 Today there are several different Disney Park destinations all over the world. But it’s here in the United States that you have the two classic epitomes of all Disney theme parks—Disneyland in Anaheim, California and Walt Disney World in Orlando, Florida. It goes without saying that with guests from all over the country (along with international guests) flocking to these desirable Disney destinations daily, the need to arrange for accommodations is a vital part of vacation planning.

Fortunately, both places boast on-property resort hotels that come with exclusive perks not offered at neighboring hotels unaffiliated with the Walt Disney Company. Hotel options range in price and theming, with Disney World providing more choices when compared to Disneyland’s three hotels. And even though no two Disney lodgings are entirely the same, we cannot overlook the parallels between each location’s own stately “grand” luxury resort offering. We are, of course, referring to Disney’s Grand Floridian Resort & Spa in Walt Disney World and Disney’s Grand Californian Hotel & Spa in Disneyland. Here is a comparison profile highlighting what each resort shares in common with the other and what gives each one its own, unique personality.

Both the Grand Floridian Resort & Spa and the Grand Californian Hotel & Spa rank as the “stateliest” of accommodations within their own Disney designations. This is evidenced by their names, of course, as well as by what they both offer by way of perks and amenities. While standing as sister resorts on opposite ends of the country, they do scrounge up similar smatterings of magic for guests, as both are luxury resorts boasting a broad range of features, including phenomenal onsite dining, pools and other recreations, spa services, and so much more.

Room accommodations also vary profusely with possibilities spanning more standard selections to multi-room suites and even villas. Both carry the Disney Vacation Club status, as well. And though categorized by different theming and motif, each one reflects on its own state’s tribute to a bygone era. All while maintaining individual identities independent from one another, it remains that the Grand Floridian and the Grand Californian are each other’s state designated equivalent to the other, depending on whether you are vacationing at either Walt Disney World in Florida or Disneyland in California.

The Grandness of the Grand Floridian

It’s true that Disneyland has been in existence for much longer, but when Walt Disney World Resort was established, it was created to be just that—an entire resort featuring onsite lodging and accommodations in addition to presenting guests with a Disney theme park. Disneyland did not follow suit with onsite lodging until much later. And while Disney’s Grand Floridian Resort & Spa was not one of the original hotels, it does outdate Disney’s Grand Californian and stands out as a Disney World classic all the same.

The deluxe resort we know and love today as Disney’s Grand Floridian, opened to the public in 1988. It was originally known as Disney’s Grand Floridian Beach Resort, later to be renamed its current Grand Floridian Resort & Spa in 1997. When it was built, the hotel quickly took the cake for being the stateliest of all others before and since. What’s more, it epitomizes the state’s past, reflecting on early, coastal Floridian establishments around the late 19th century/early 20th century with a design and décor motif that perfectly pairs with its objective.

The Grand Floridian is situated within the Magic Kingdom Resort Area and even shares the connecting monorail line to the park along with two of Disney World’s original resorts—The Contemporary and The Polynesian. This means that guests staying here have instant transportation available to access Magic Kingdom Park right next door. There are also convenient ferry boat services for those looking for a scenic venture across Seven Seas Lagoon. And more recently a walking trail has been created, allowing those who are up for a little leg work to actually walk from Disney’s Grand Floridian to Magic Kingdom Park.

In addition to easy access to and from the Magic Kingdom, the resort is known for a wide range of onsite amenities and recreations. Swimming is one of the most popular pastimes available at any Disney Resort, and in the way of pool provisions, the Grand Floridian features two premium zero-entry offerings. One is the leisurely, calming Courtyard Pool with an adjoining jacuzzi. The second is the larger and livelier 111,261-gallon Beach Pool, which features a 181-foot waterslide. As the name implies, it is located within close range to the resort’s own manmade beach—an attraction in and of itself, and one that also features recreational endeavors, including splash areas/play areas for children, cabana rentals, poolside refreshments, and much more.

And as we mentioned, their stellar ferry boat passage to Magic Kingdom Park before, the fact that the resort is located along Seven Seas Lagoon makes maritime merriment all the more possible with plenty of boating rentals available for a multitude of on-the-seas outings. From stellar onsite shopping experiences to jogging trails, arcades, and more, we could go on and on listing all the different amenities to be had here, but it is perhaps their famed spa services that we ought to highlight most of all. Disney’s Grand Floridian Resort & Spa is the location for its own world-renowned Senses Spa. While not available to guests at present time, its usual offerings rank above and beyond the most rejuvenating services with myriad possibilities to choose from. Even though these full spa services continue to be on hold at Disney World, the 24-hour fitness center is currently back in full operation for anyone looking to keep fit.

Related: Indulge On Your Next Disney Vacation at Disney’s Grand Floridian Resort

Delectable dining makes up a grand part of the Grand Floridian experience as well. Here they feature a plentiful pick of options for eating, from quick and casual to more refined, signature presentations. While not all dining is available at present time, some of their most renowned highlights include the following:

Related: Grand Floridian Dining Guide Has Everything You Need To Know

While we’ve touched on resort amenities and dining, the most obvious part to staying onsite at any Disney property is of course the accommodations themselves. And Disney’s Grand Floridian offers a whole host of possibilities in this range. In total, the resort boasts an impressive 867 room designations, with even the most standard of rooms here boasting a larger-than-normal 400 square footage. But options, like we said, are far ranging and even include various multi-room suites and grand villas in addition to the usual accommodations, spanning a total of six different buildings on resort grounds. With the profuse possibilities, close proximity to the Magic Kingdom, and bountiful amenities right onsite, it doesn’t get any grander at Disney World than it does at Disney’s Grand Floridian.

In a way, Disney’s Grand Floridian Resort & Spa was the inspiration behind Disney’s Grand Californian Hotel & Spa. While the two may follow separate themes, it was the concept of stately grandeur at Disney World’s flagship resort that motivated Disneyland to recreate a California equivalent.

Disney’s Grand Californian Hotel & Spa opened to the public in 2001 as part of a Disneyland Resort-wide expansion that was going on at that time, which also included the opening of Disneyland’s second park—the Disney California Adventure. The overall hotel design focuses primarily on early 20th century arts and craftsmanship with a theme modeled after the bucolic beauty of nature as appreciated through forest and garden representations.

The hotel reflects on the influences of many recognizable architectural wonders throughout the state, including a reception hall based on San Francisco’s renowned Swedenborgian Church. Fans of Frank Lloyd Wright will undoubtedly notice commonalities in craftsmanship all throughout, and you’ll even find some works of Roycroft artisanship on display in the lobby. But aside from the hotel’s décor and motif, it is both a refined yet comfortable resort with easy access to Disney California Adventure Park. In fact, it has its very own private entrance leading straight into the park, which any resort guest may access, providing they have obtained valid park admission to do so. It just doesn’t get any more convenient than that!

While Disney vacations are obviously more about the parks than the hotel you are staying at, it can’t be denied that this luxury lodging has plenty in the way of onsite recreations and amenities and can stand just fine on its own as a vacation venue. Because swimming is premium at any stellar resort, it should come as no surprise to learn that this grandest resort around offers no less than three onsite pools for guests to enjoy. There is the Fountain Pool, garbed in a peaceful, rural setting surrounded by trees, stone walls, and a finely crafted turtle fountain at the heart of it all.

Then there is the leisurely Mariposa Pool with fanciful butterfly décor and a nearby whirlpool spa. But it is perhaps the lively Redwood Pool that most folks flock to, with its wildly winsome 90-foot waterslide. You will also find a Mickey Mouse-shaped children’s pool and whirlpool hot tub in close proximity as well. And for folks looking to make it an all-immersive pool day, take note that poolside cabana rentals are also available. And let’s not forget about the other onsite amenities the resort has to boast about.

From a state-of-the-art fitness center to numerous other pleasantries, there’s plenty to keep guests happy and fulfilled. Perhaps one of the hotel’s most crowning attributes is their one and only Tenaya Stone Spa. A full-service, lavish undertaking in every way imaginable, the myriad options and experiences awaiting guests here allows for the most indulgent of premium pampering packages around.

We all know that dining is also a major part of any resort experience. And it should be noted that Disney’s Grand Californian is home to plenty of pleasing possibilities in regards to that as well. Here are some of their stellar onsite dining locations:

As far as room accommodations go, Disney’s Grand Californian boasts an impressive range of standard rooms, along with suites and multi-room suites, and several villa options as well. And like the resort’s artisan and craftsman-centric theming, the rooms follow suit by way of this motif. All in all, rest assured that while staying here, you have plenty of options for whatever works best for you and your party.

Related: The Villas at Disney’s Grand Californian Hotel & Spa Reopen in May!

Here we have highlighted two very different yet equivalent Disney resorts that are known to delight vacationers through each one’s enduring grandeur. Do note that while we have listed resort-wide attributes and features at both, not all experiences are currently being offered at present time. All experiences, however, are expected to return eventually along with newly emerging ones—always a given at any Disney Resort where magical moments are forever being made.