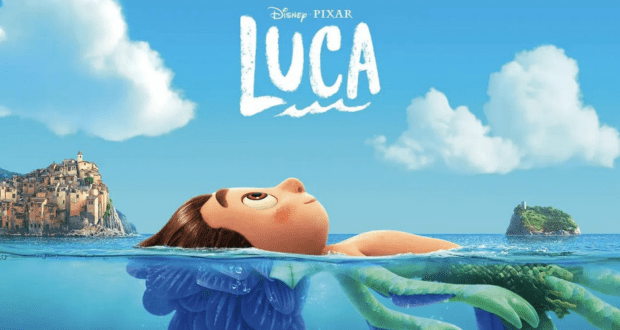 Memorial Day Weekend in the United States is often celebrated as a time marking the official return of warm-weather activities. These often include spending more time outdoors for a much-needed reprieve, getting back to backyard cookouts with friends and family, and the welcome reprisal of everyone’s favorite summer pastime—swimming.

If you and your family have plans this Memorial Day Weekend, you’ll probably be spending most of your daytime hours outside. But the sun eventually has to go down and you will undoubtedly be heading indoors for the evening once the day is done. So why not make the most of family togetherness and celebrate the pending summer season by continuing on with a lighthearted feel-good movie centered around the beautiful Italian Riviera?

No movie fits the bill quite so well as Disney-Pixar’s computer-animated hit family film Luca from 2021. Blending together the best of in-water and on-the-coast adventures, self-discovery, family, friendship, summertime delights, and…sea monsters, we feel that Luca makes a most befitting recommendation for Disney+ Family Movie Night streaming this Memorial Day Weekend.

Luca follows the story of a young sea monster, Luca Paguro, living with his family and many other sea creatures deep below the waves of the Ligurian Sea in an underwater farming community of sorts. He leads a pretty sheltered life with an overprotective family forever fearful of any interactions with the land monsters above.

They’ve raised Luca with warnings to never go above the surface and, most importantly of all, to never go ashore. But curiosity is inevitable, even for a good kid like Luca, and when he accidentally follows another fellow sea monster peer to the surface, he discovers for himself a whole new life he never even knew existed. When dry and on land Luca becomes a human himself, and is able to have human experiences beyond his wildest imagination.

Luca’s fellow sea monster friend, Alberto, has not only transitioned back and forth between land countless times, but he lives permanently on the shores in his own remote dwelling. While he has always steered clear of human-inhabited areas, he does know far more about the human experience than Luca does and has even developed a personal interest in those famed high-speed Vespa scooters.

In fact, he and Luca even attempt to build their own out of spare parts—a pastime that leads to a lot of back and forth travel between land and sea, which doesn’t go unnoticed by Luca’s concerned parents. As a result, they make the decision to have Luca go to stay with his uncle, all with the best intentions in mind. But their decision only provokes Luca to break the surface once more, this time with plans for staying on land permanently, never to be found by his parents.

Because they can’t stay in Alberto’s close-to-the-sea abode of sorts, and Alberto wants to get the necessary materials to rebuild a Vespa anyway, the two agree to embark on an adventure that leads right into the heart of the human community. While there, they work hard to blend in with common folk, as they soon learn that sea monsters are not very favorable in the eyes of humans. But while being leery of humans in general, they do make a couple of acquaintances along the way, particularly that of a girl named Giulia.

She plans to go head-to-head in an annual summer Triathlon with a much-hated competitor she always loses out to. And when Luca and Alberto learn that the prize money involved may be just what gets them their Vespa, the three agree to be a team in the upcoming endeavor. But there’s still the matter of trying to hide the fact that both boys revert to sea creatures when they get wet, not to mention the added tension when Luca’s parents also decide to make the human transformation, coming on land in search of their son!

Basing Luca in the Italian Riviera was a most befitting choice geographically for the filmmakers to decide on. While the film does take place during the summertime months, which would arguably be an opening to many other locations experiencing the seasonal norms particular to this time of year, the fact that Luca lives in a place where there is a more consistent clime both in and out of the waterworks far better in establishing a favorable permanence of residency.

While a direct geographical callout is not specifically done in the film, it’s pretty well established that Luca makes his home under the waves of the Ligurian Sea. Like we see with Frozen and its Arendelle setting, the nearby village of Portorosso isn’t actually a real place. But its location is alluded to as being close to Corniglia. What’s more, the buildings and seaside village setup fit perfectly as being a traditional representative of the Cinque Terre region.

Working in tandem with the Italian Riviera’s climate is the basis of preexisting sea legends known throughout this part of the world. One particular bit of local lore that may have loosely inspired the sea creature elements at work within Luca is that old Italian legend of Colapesce—the fisherman’s son. While Luca presents an original story arc, it still exudes that traditional flavor inspired by such tales of old, making it believable as what could have been based on a particular legend even though it was not.

Related: Disney & Pixar’s “The Art of Luca” Book is Available Free Online for a Limited Time

Pixar has been known to rely on personal experience in storytelling, with filmmakers, cultural consultants, and other members of the team weaving bits of themselves into every project. And while we can confidently assume that nobody at Pixar Studios has ever lived the life of an adolescent sea monster, there are many other relatable narratives at work within Luca just the same.

At the root of Luca’s storyline, in regards to friendship and setting, director Enrico Casarosa drew on his own personal experiences as a kid growing up along the Italian coast. What’s more, in his youth, he—like Luca—had a much more adventurous friend named Alberto who helped him to come out of his shell and be bolder and more daring.

On a more universal note, there is that age-old plot about not fitting in, being at odds with oneself, and feeling the need to hide who you really are for fear of being rejected by family, friends, or society in general. While this motif can take on many different dynamics, it seems to weave a mutually transcending tale that all people can relate to in their own personal ways. And then there’s the whole part about being at odds with one’s parents, disobeying, family conflicts, and misunderstandings all in the name of love and protection.

In getting back to the idea of Luca’s deliverance as a story about being different and oftentimes misunderstood by those closest to you, there’s also the happily ever after scenario of coming to terms with who you are by embracing it and accepting it. Although, we should point out that unlike in other stories, like The Little Mermaid, for instance, Luca never sought to become anything he wasn’t already. This is in exact contrast to Ariel, who agrees to devious dealings in exchange for becoming human. Luca, like all sea monsters in his storyline, has always had the ability to become human when coming out of the water.

It just wasn’t something embraced by either community. His sea monster family discouraged it and the “land monsters” harbored prejudice and even fear for the elusively spotted creatures of the deep. So, the long and short is that Luca’s quest is really about embracing a side of himself kept hidden as a result of popular influences rather than celebrating that unexplored side and all the possibilities that come with it.

What’s especially endearing about the conclusion in Luca is that it’s not just about the title character embracing who he is as a sea monster and being proud about not having to hide it, but the fact that all the characters come to their very own personal acceptances as well. Even the most animosity-driven in the village eventually come to terms with accepting sea monsters.

But what’s perhaps one of the most heartwarming about-face moments in a family-driven storyline is the idea that Luca’s parents accept that he is his own person (or in this case, sea creature) and even agree to let him live his life in the way best suited to him. On a similarly connected note is the fact that Alberto too comes to accept that he and Luca have different dreams and ambitions but can still be friends regardless of where each one’s path leads.

There’s no denying that Luca is the perfect movie to celebrate warmer weather and family togetherness with this season or at any other time of year for that matter. But in addition to Luca, there are a number of other summer-themed picks to consider streaming on Disney+ as well.

From The Little Mermaid to Moana, Lilo & Stitch to even live-action musicals like the Disney Channel Original Teen Beach Movie franchise, there are plenty of coastal-minded considerations to keep in mind for family film watching this Memorial Day Weekend.