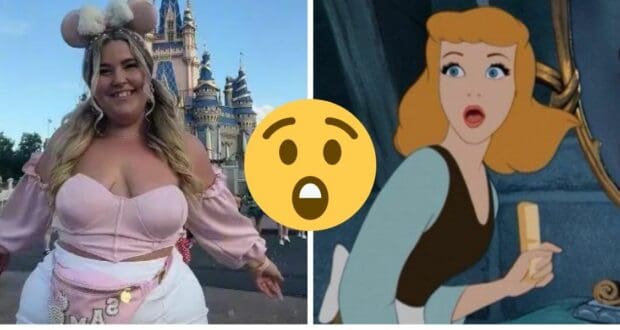 Sam Paige is a plus-size model and popular TikTok influencer who shared some videos of her recent trip to Disney World (particularly her visit to the Walt Disney World Resort Magic Kingdom Park, where she posed in front of Cinderella Castle at her “fave place”).

The model was wearing a pink and white outfit that seemed perfect for a Disney princess and would most likely pass muster in the eyes of personal Disney stylists — complete with Minnie Mouse ears that complemented the ensemble — but, instead of being praised for her Disney style and Disney look, other TikTok users attacked the model for dressing in something that was supposedly too revealing for a family-focused theme park like Walt Disney World.

“Why dress so inappropriate when you’re at a theme park for children? That’s an outfit you’d wear at an adult gathering,” one naysayer wrote on the social media platform. Sam Paige responded to the negative comments in another video that can be seen below, making it clear that she did not think that her outfit would be called “inappropriate” if it was worn by someone smaller than her,

Feeling myself in this fit

In Sam Paige’s case, the influencer and model made it clear that the people who criticized her outfit choice were only calling her outfit “inappropriate” for Disney World “because it’s on a big body.”

“Skinny people wear shorter things, more revealing things at theme parks,” Sam Paige added, mentioning later that “because I’m fat it’s ‘inappropriate'”. Some other Disney fans agreed with the TikTok user, mentioning that they have “literally seen people in actual bikinis at Disney” as well as “jean shorts…that might as well have been thongs”.

Do you think that Sam Paige is right? Have you had any negative experiences when it comes to following Disney World’s dress code or choosing an outfit for your Disney look that won’t get you kicked out of the Disney Parks — and what is the most inappropriate outfit that you have seen on another Disney Guest?