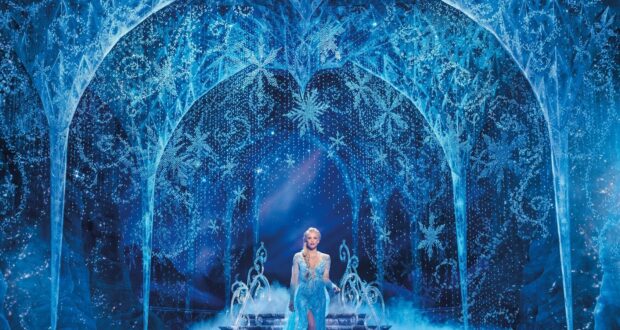 Oaken Is Hosting A Frozen Dining Adventure Aboard the Disney Wish, and We Have A First Look At The Character

The Disney Cruise Line has been consistently impressing potential Guests with its plans for the upcoming Disney Wish cruise ship that’s being added to its Disney fleet: a holographic Marvel restaurant and a Cinderella-themed atrium are just the beginning, and an interactive Frozen dining experience is apparently on the way as well! Fans of Frozen and the Disney Cruise Line will be pleased to see this teaser image of Oaken, the sauna-loving Norwegian who was a standout character in the Frozen movies and who will be hosting Arendelle: A Frozen Dining Adventure aboard Disney’s newest cruise ship.

Here's a first look at Oaken from Arendelle: A Frozen Dining Adventure coming to the #DisneyWish! When you visit for an engagement celebration for Queen Anna and Kristoff, you'll find Oaken hosting the celebration with his "Hearty Party Planning Services." pic.twitter.com/QRkZvm96VJ

Even though Elsa, Anna, Olaf, Kristoff, and Sven were the official main characters for Frozen and Frozen 2 (not to mention all of the shorts and spinoffs on Disney Plus), Oaken melted many Disney fans’ hearts with his toasty-warm store, endearingly cheerful accent, and private sauna. A character like Oaken will no doubt be a treat for Disney Cast Members like the performer in the image below, because Oaken is a character with plenty of distinct mannerisms and references that will no doubt be a hit with dining passengers. Having a real performer playing Oaken will also be a nice touch, if he is indeed showing up in person, because it looks like the other Frozen characters might be presented through holograms like the in the Marvel restaurant mentioned above! We also love that Arendelle: A Frozen Dining Adventure will be about Queen Anna’s engagement to Kristoff, because their romantic engagement was definitely a highlight at the end of Frozen 2–and who doesn’t love a Disney wedding? 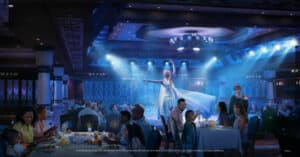 Credit: Inside the Magic / Disney 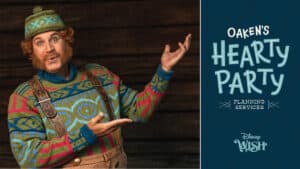 With his Scandinavian charm, hygge aesthetics, and cheery disposition, Oaken seems like a shoo-in as a party planner–so it’s a pleasant surprise that he’ll be coordinating the catering for Queen Anna and Kristoff’s engagement party (which the Disney Wish cruise passengers are attending for dinner) through his “Hearty Party Planning Services” business. The idea of Disney Guests getting to attend two Frozen characters’ engagement is also particularly exciting, because its interactive nature will make you feel like you’re really getting to engage with your favorite Frozen royals! The food will also apparently be Nordic, so get ready for some unexpected but somehow comforting flavors!