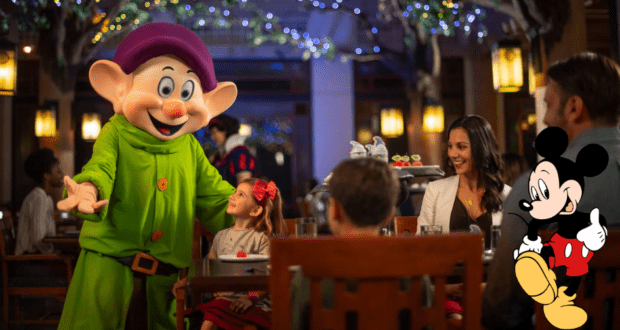 The Most Universally Lovable Restaurants at Disney World Resorts

So many of Walt Disney World’s vast and varied Resort Hotels boast top dining right onsite. From signature dining experiences that need no introduction to well-known family-favorite go-to hits that make it onto everyone’s list, you can’t deny that the dining scene at Disney has plenty of accolades. But, while it is obviously the case that some of the most upscale establishments are among Disney’s most coveted dining experiences to strive for, it’s understandable that such options aren’t of a universal appeal per se.

Can you imagine taking a brood of children to Victoria & Albert’s, for instance? And then there are those delightful casual venues like Beaches & Cream Soda Shop that do well for some but are underwhelming for others and can therefore not be deemed a universally appealing highlight. But here’s a sampling of seven savory restaurants around Disney Resorts that do succeed in catering to the very specific interests of the general population.

There are several excellent picks for phenomenal dining on location at Disney’s Grand Floridian Resort & Spa. You have quick-service hits and upscale options alike, all of which have their own specific fan base. With Narcoosee’s offering lavish refinement via seafood selections that come with a wonderful waterfront view and Citricos donning its new Mary Poppins-themed accents in coordination with a delectable menu of its own, it’s pretty hard to find the most mutually befitting option here. But, alas, the number one choice for garnering universal likability based on the menu, as well as affordability, is none other than the Resort’s own namesake café. 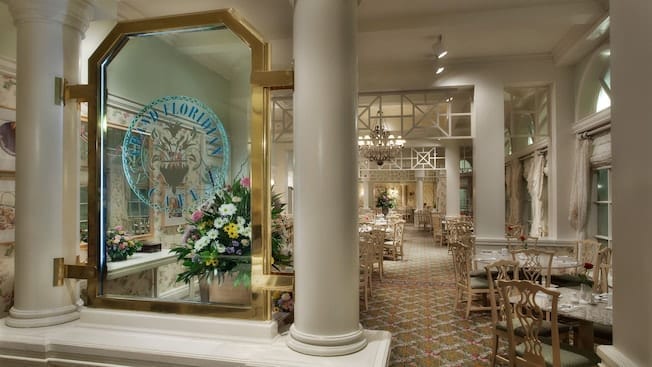 In successfully emanating the same Victorian vibe that the rest of the Resort centers around, the Grand Floridian Café delivers on a quaint tearoom-like appeal in décor and style. While the setting is comfy and casual, it still has elegance and charm about it.

The menu is extremely versatile, with delectable options served around the clock, beginning with breakfast and continuing on throughout the day. Their Lobster ‘Thermidor’ Burger, for instance, is the stuff that legends are made of. And their Buttermilk-Fried Chicken and Waffles is another hit, along with Miso-Glazed Salmon, Brioche French Toast, and so many other possibilities. And given all that you get, the menu is priced fairly reasonably all around, which makes it an excellent choice for entire families. 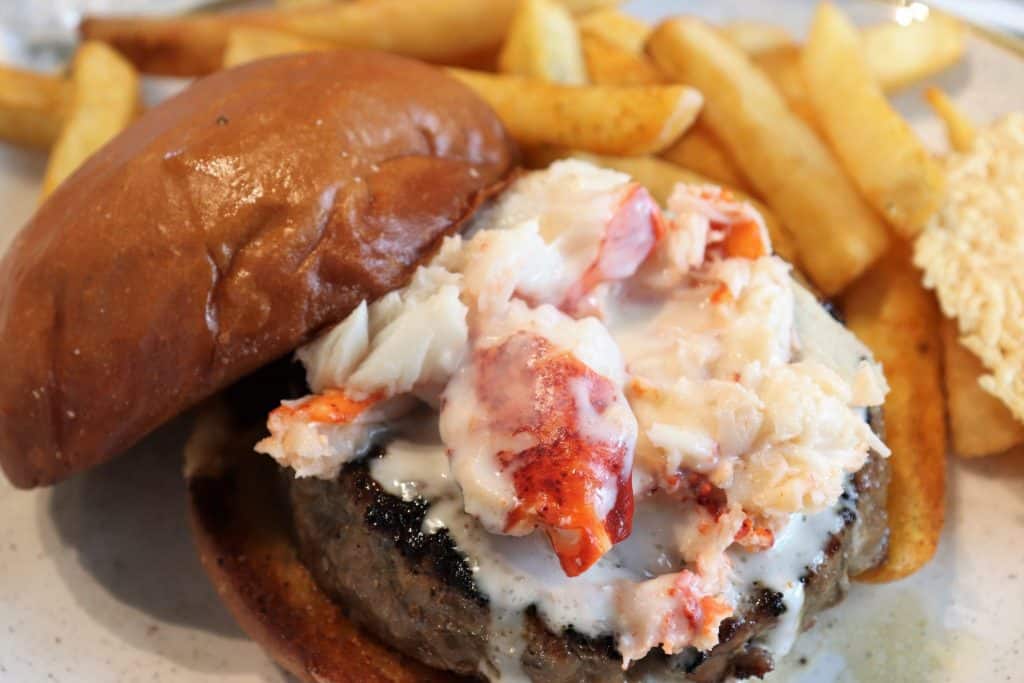 Credit: Disney in Your Day

Known primarily for delivering on stellar seafood selections done up with culinary refinement and mastery, this signature dining staple can be found over at Disney’s BoardWalk. The cool chic, yet nautically quaint ambiance really accents the overall dinnertime experience, as does the open kitchen, which makes you feel a part of the preparation.

As for the food itself, it’s nothing short of brilliant preparation and absolutely inspired flavor. Seafood is most obviously the star on the menu, particularly those roasted renditions that give the selections here the advantage in riparian ranking. They even deliver their own take on that Potato-Wrapped Red Snapper that EPCOT’s Monsieur Paul was so known for. 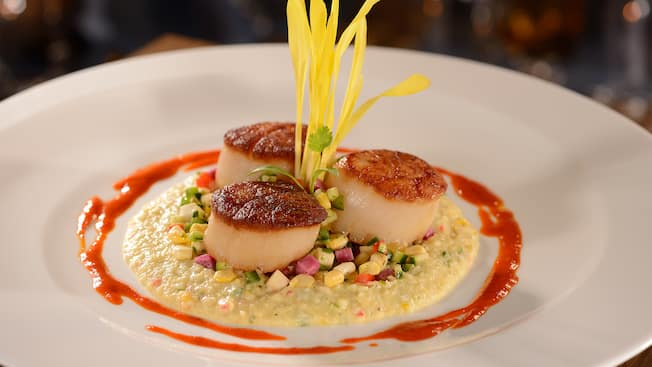 For those with land-locked tastes, as well as for those adhering to special diets, there are customized alternatives that do rather well also. Their Organic Chicken with parsnip puree, roasted beets, cracked pistachios, and sauce supreme is a wonder to boot, as is their intricately crafted Roasted Tofu platter with vegetable accompaniment and Holland pepper coulis. 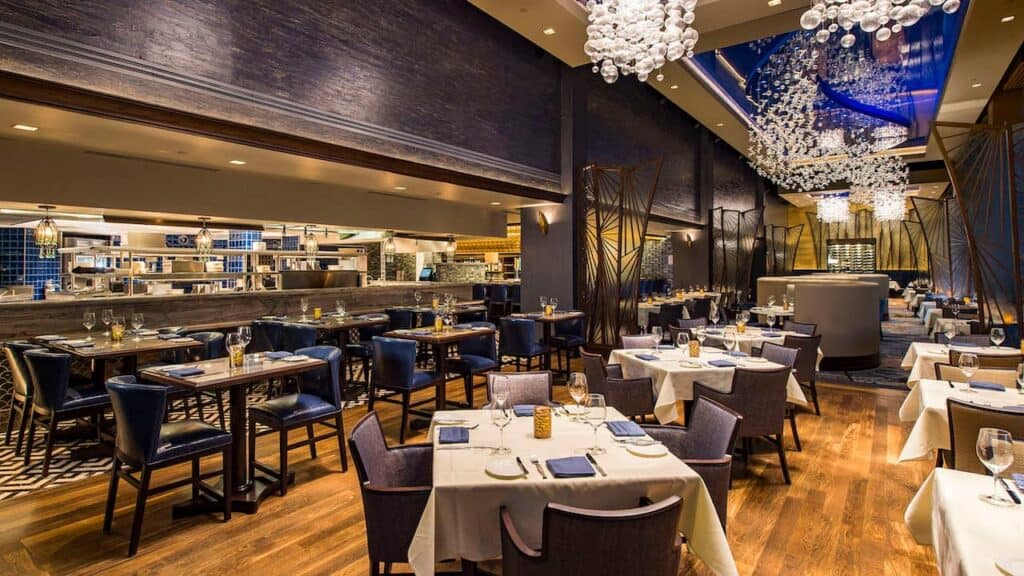 This pleasing paradise presentation, over at Disney’s Caribbean Beach Resort, is just perfect for families looking to sit back and relax with the easy-going island-time mindset. You feel totally at ease with no rush or worries as you indulge in a paradise-infused dinner offering packed with flavor and vibrance. And speaking of vibrance, the wonderfully incorporated theme of being a Caribbean village market setting succeeds amazingly in transporting you to pure island-like bliss. The family-style offered menu presents many unique features and flavor fusions that speak of the tropics. And that’s perhaps why the main entrée is rightfully named “Taste of the Caribbean” and includes the following: Oven-roasted citrus chicken, slow-cooked mojo pork with mango sambal, grilled chili-rubbed beef with mojito relish with cilantro rice and beans, vegetable curry, and grilled seasonal vegetables. The meal also comes with their signature Buttery House-Baked Pull-Apart Rolls, Spice Necklace Salad, and Celebrated House-Made Coconut-Pineapple Bread Pudding. Also, note that there is a plant-based alternative offering that is just as (if not more) flavorful. 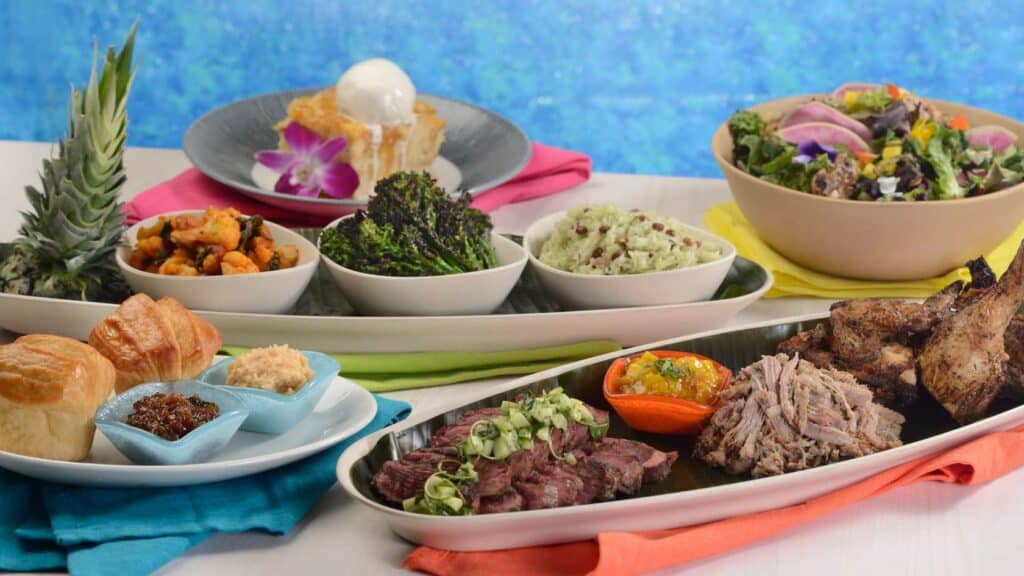 While Disney’s Contemporary Resort has been long known for housing plenty of pleasing dining venues—past and present—over the years, one timeless testament that’s been appealing to diners for quite some time now has been that remarkable rooftop dining experience that comes with California Grill. While the ambiance and option to see the nighttime fireworks at neighboring Magic Kingdom Park is arguably its biggest selling point, the novelty cuisine enables the restaurant to stand just fine on its own in garnering praise and palatable perfection. From Florida Blue Crab Bisque to Vegetable Fritters, Rock Shrimp from the Key West to their house California Grill Sushi Classic Trio, there’s much to be said about the menu. 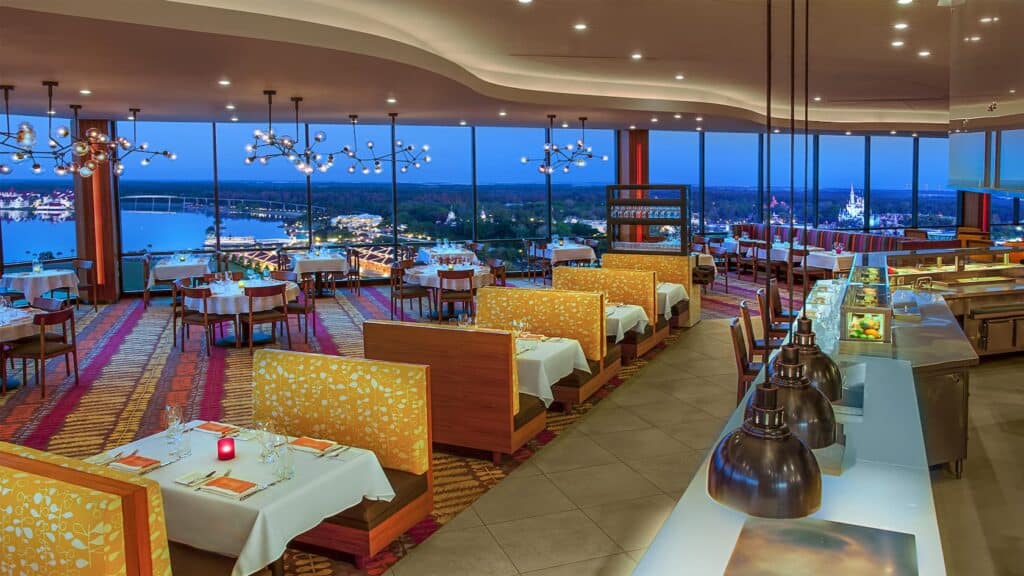 And, of course, there’s the aforementioned obvious fact about it providing the excellent vantage point for those nighttime fireworks over Cinderella Castle. And with speakers located throughout the restaurant, you feel like you’re right there. Even if you aren’t dining in tandem with the main event, any diners from that day are permitted to access the site with proof of reservation.

Fireworks or not, the stunning and expansive views are breathtaking! For anyone seeking a literally uplifting meal, this is one to certainly take note of. Also, keep in mind the other rooftop dining locations at other Disney Resorts, including Topolino’s Terrace over at Disney’s Riviera Resort and Toledo – Tapas, Steaks & Seafood, housed within the new Gran Destino Tower at Disney’s Coronado Springs Resort. 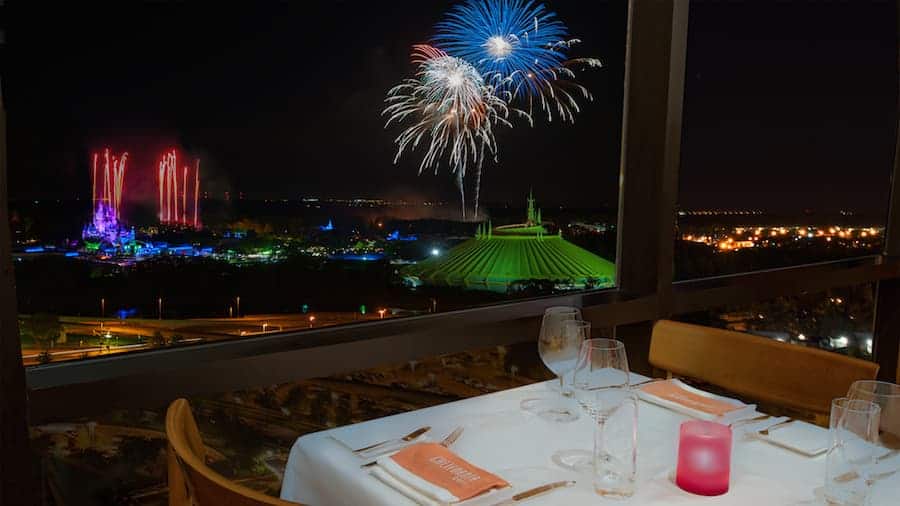 Because ’Ohana means family, is it any wonder why this family-style favorite over at Disney’s Polynesian Village Resort wouldn’t make the list? Serving up South Seas satisfaction by way of a bountiful breakfast, as well as a hearty dinner, you can’t help but love the food. But the interactive happenings onsite, with in-house entertainment and even character dining (soon to return), make the meal a very happy fellowship-laden experience indeed. And, of course, the overall island-inspired ambiance does just the trick in locking you in all the Polynesian pleasantries. 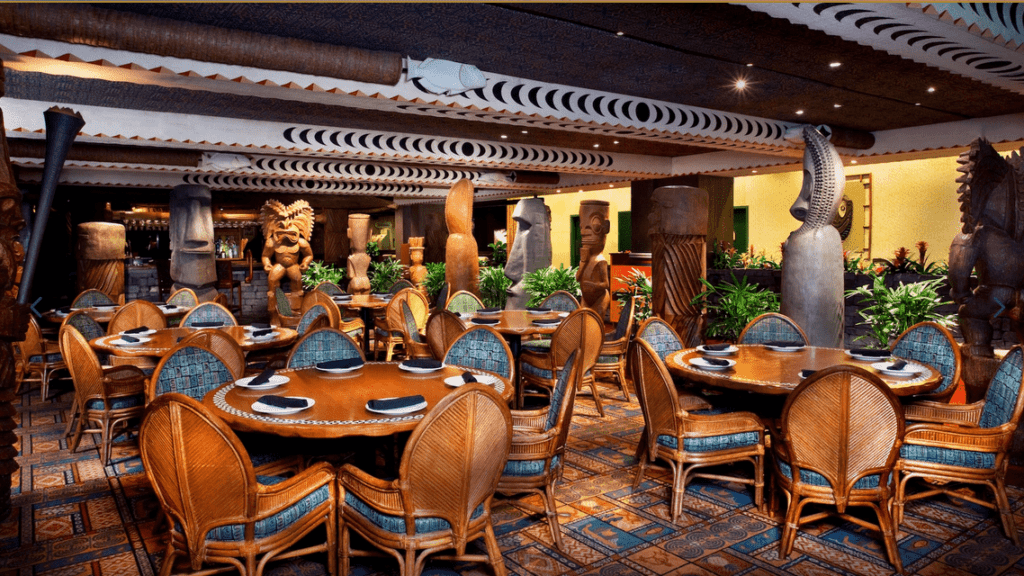 As stated only a moment ago, meals here are served up in traditional family-style format, with breakfast offering their wonderful ’Ohana’s Breakfast in the Frying Pan skillet, accompanied by fresh fruit and their freshly baked Pineapple and Coconut Bread. They also have a plant-based rendition of the same meal. Dinner continues the story of a satisfying meal with their ’Ohana’s Dinner in the Frying Pan, accompanied by a Green Vegetable Salad, Chicken Wings with Honey and Cilantro, Pork Fritters, House-made bread, and ’Ohana Bread Pudding. Again, there is also a vegan variation presented in addition. Disney’s Animal Kingdom Lodge is one of those places that headline distinguished dining options of a novel yet mutually satisfying nature. There are just so many highlights here! Sanaa is certainly a testament, with those unbeatable views overlooking the savanna, which allow you to practically dine directly in the company of the Resort’s resident animals. Then there’s the elegance and flavorful fusions of the one and only award-winning Jiko—The Cooking Place with a reputation that can’t be dismissed. But perhaps the very best mutually appealing option and the one with the most plentiful offerings of all is their resident buffet, Boma – Flavors of Africa. Following suit with a motif that portrays that of an open African market, Boma really is one of the grandest buffet offerings at any Disney Resort. Open daily for breakfast and dinner. Even if you don’t want to explore the bold, adventurous tastes of African cuisine, you may rest assured that there are plenty of familiar favorites to fill up on as well. Across the board, Boma is the most mutually satisfying option on location at Disney’s Animal Kingdom Lodge. 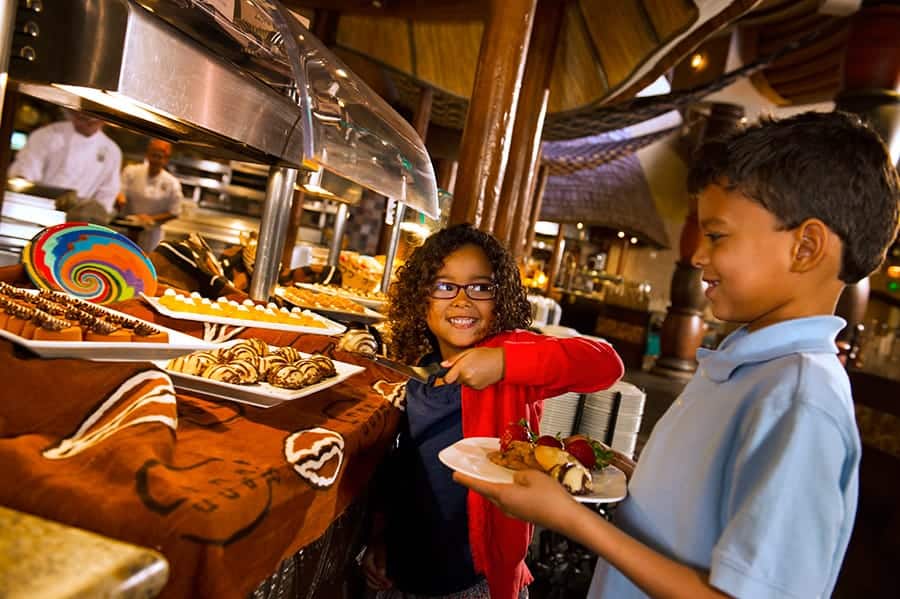 If you’re any kind of classic Disney fan, then you can’t miss out on the opportunity to dine with “the one that started it all”—the one and only Snow White. And that’s exactly what you get to do with Storybook Dining at Artist Point, over at Disney’s Wilderness Lodge. A themed dinner engagement that appeals to children and adults alike, the elegant décor and ambiance are wonderful as is, but when the scene is accompanied by beloved characters (and not so “beloved” characters) from Disney’s iconic first animated feature-length film Snow White and the Seven Dwarfs, you know you’re in for the meal of a lifetime. 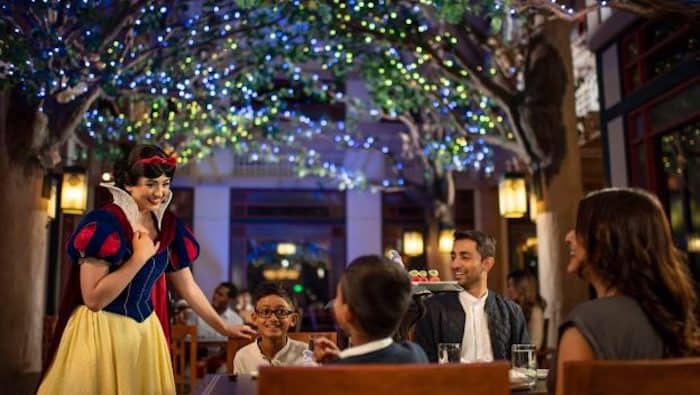 The menu has many specific thematic inclusions to assist in the overall immersion of the Snow White theme as well. And all the offerings are done up to par and perfection, including the more sinisterly named Hexed “Tricken” Chicken and the “Poisoned” Apple dessert feature of dark chocolate and apple mousse with a sour center. 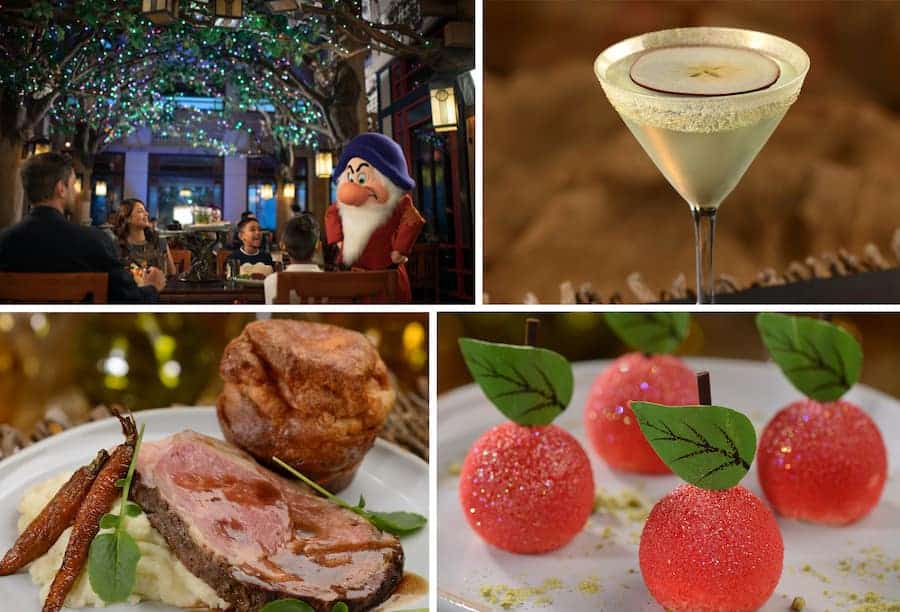 There are so many other Disney World hotel restaurant favorites to consider, as well as those located throughout the various theme parks and in Disney Springs—all of which succeed in delivering a universal charm and appeal to the vast majority of folks. Disney does a perfect job of satiating all cravings, whether by dishing out adventure or satisfying that hunger for something both memorable and magical.