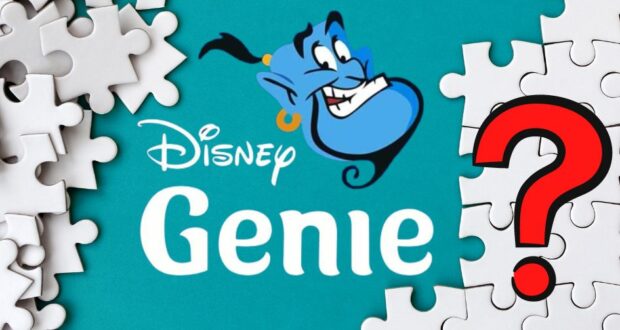 If you have plans to visit Walt Disney World Resort or Disneyland Resort, you’ll need to have an understanding of Disney’s system update called the Genie. Gone are the days of FastPass+, as the Genie has rolled in. Here’s a breakdown of the Disney Genie at Walt Disney World, as we hope to clarify the confusing three-piece puzzle.

The former complimentary FastPass system that allowed Guests to skip the standby line at a selected time has been removed from Walt Disney World. Instead, when visiting Magic Kingdom Park, EPCOT, Disney’s Hollywood Studios, or Disney’s Animal Kingdom, Guests will have the option of using the Genie.

The first piece in the Genie puzzle is the “Disney Genie.” The Disney Genie is an upgrade in the My Disney Experience App. It is complimentary and was designed to help Disney Park Guests better anticipate crowd levels, with Genie suggesting what the Guest could do next.

Guests can make selections within Disney Genie on their phone to better help the Genie understand what attractions, restaurants, and experiences are on the top of the Guest’s list. Genie then pulls together a personalized itinerary to guide Guests through the Disney Parks day.

This is where it starts to get interesting! Disney Genie+ is very similar to the former FastPass System. Guests can select attractions to skip the standby line at allotted times via what is now called “Lightning Lane entrances” instead of the former FastPass entrances.

Disney only promises 2 to 3 attractions or experiences per day using the Disney Genie+ service. Unlike the former complimentary FastPass service, Disney Genie Plus costs Guests $15 per person per day.

Disney Genie+ selections begin at 7:00 a.m. and can only be made one at a time. You must redeem an existing Disney Genie+ service or wait 2 hours (whichever comes first) before making another attraction selection. The 2-hour wait to make another selection begins when the Park opens, even if you made your first booking at 7:00 a.m.

Current Disney Genie+ experiences available for each Disney Park include (subject to change):

Pricing varies for the Individual Lightning Lane attractions depending on demand and crowd levels. We’ve seen pricing range from $8 to ride an attraction via the Lightning Lane entrance to $18.

Individual attraction selection for Lightning Lane begins at 7:00 a.m. for Disney Resort Guests or when the Park opens for non-Resort Guests. And yes, they sell out, so be sure to snag yours as soon as possible.

You Don’t Have to Use the Service

Disney does not require Guests to use any of this three-piece Disney Genie puzzle. You don’t have to mess with Disney Genie Lightning Lane and instead use the normal standby line to wait for attractions. Or, you can use one piece of it and ignore the rest. It’s completely up to the Guest.

And despite the complaints of the upcharge and confusion the system holds, it looks like, yes, Disney Genie, Disney Genie+, and Individual Lightning Lane selections are here to stay.

Before you plan your Disney Park day, be sure to check out the latest and look for any further updates via the My Disney Experience App or Walt Disney World website, as Disney has been known to make sudden changes in attraction availability and cost to the Disney Genie Service.