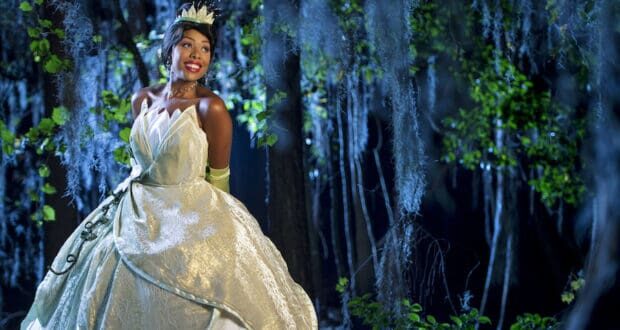 As part of the ongoing Ultimate Princess Celebration and its celebration of Disney princesses’ courage and kindness, many different Disney Princess collaborations or collections have been released that are inspired by the Disney princess characters, and several of them have been more expensive high-end brand products. For the Ultimate Princess Celebration, shopDisney is clearly going all out when it comes to the luxury aspect of some of its princess-inspired Disney consumer products, and the highlight is the Disney Designer Collection of limited-edition dolls representing the Disney princesses! Although there are lots of Disney princess dolls or figurines in the world to represent the Disney princess characters, these limited-edition dolls are no classic dolls from Disney. They are specifically meant to be high-fashion, couture, edgy, and unique. Some of them also have realistic details like rooted lashes, to make them look less artificial! They are also made in small quantities; there were only 9,900 Mulan dolls made and 10,000 Little Mermaid Ariel dolls.

Many of the dolls are no longer in stock, despite their high price tag of $129.99, but two that are left are the Mulan and Little Mermaid Ariel dolls — and even though Princess Tiana does not yet have a doll in stock, some teaser images of the doll have been released and the website says that she’s “coming soon”! Check her out in the upper right of the image below!

Princess Tiana has gotten a lot of attention in recent month, partly due to her new attraction (which is replacing Splash Mountain) and partly due to her part in the World Princess Week that kicked off the Ultimate Princess Celebration. The New Orleans chef also has a musical series coming her way that will focus on her travels with Prince Naveen! 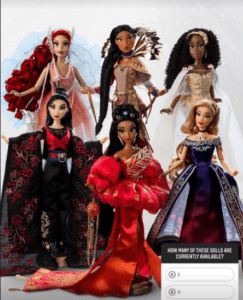 So far, it looks like the Princess Tiana Collectible Doll will be wearing couture just like the other Disney princesses are wearing in the collection. Each doll is designed by a different designer; the Disney Designer Collection Princess Ariel Doll was designed by Ashley Losada, and the Disney Designer Collection Princess Mulan Doll was designed by Danae Cendejas. While Tiana’s designer hasn’t been revealed yet, it’s clear she’s wearing something that’s a more modern take on “elegant and fashionable” than what she wore in her 2009 Disney animated film The Princess and the Frog!

If you want one of these shopDisney dolls, but they don’t fit your budget, keep an eye on the website! The holiday 2021 Princess Rapunzel doll has now sold out, but she had actually gone down in price from $129.99 to $32.98, so getting a good deal is possible if you wait it out. The remaining dolls in stock (until Princess Tiana joins them) are Pocahontas, Princess Jasmine, Mulan, and Ariel. There’s also a limited-edition Kida doll from Atlantis: The Lost Empire (2001)!

Although the Tiana doll hasn’t been released yet, these dolls typically come with a Certificate of Authenticity and it’s likely that the Tiana doll will too. They also come with display stands as well as “elegant window display packaging” that features a “gatefold cover, foil decoration, and [a] magnetic closure”. Which Disney princess heroes are you hoping to see portrayed as Disney princess dolls next in this collection: perhaps Raya from Raya and the Last Dragon (2020), the Frozen queens Elsa and Anna, or the Disney heroine Mirabel Madrigal from Encanto (2021)? And have you taken a look at some of the other products available on shopDisney, such as the new Disney Castle Collection of Merida products or available in the online Disney store?