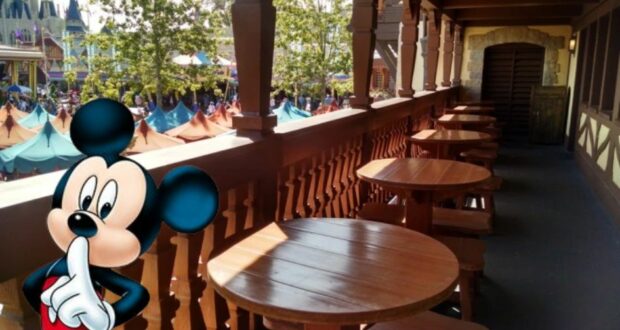 Upstairs Dining Locations at Disney That No One Talks About

Throughout Walt Disney World Resort, you will find a vast and versatile range of dining options of all distinctions. It doesn’t matter if you’re craving something quick and casual or more refined and elegant because they have you covered in just about anything and everything you could possibly ever want.

It goes without saying that dining is an imperative part of any visit to Disney World.  People have to eat, right? And unfortunately, some of the most favored locations around are prone to fill up fast, leaving you and your party scrounging around for viable seating options, wherever you can find them. The reality is that sometimes you can’t! But what if we were to tell you that there are several enjoyable, surprisingly popular eatery locations that boast lesser-known seating options on a largely overlooked upper level?

Few even know that these additional seats are available, which is a shame because, in many cases, upstairs dining at such locations provides a refreshing amount of privacy to take delight in, away from the crowds. If you want to know where you can dine in what are practically secret upper-level locations throughout Disney World, then we have five places to tell you about.

Over in Frontierland at Disney’s Magic Kingdom Park, you will find this greatly favored quick-service spot. Known primarily for serving up a wild range of Tex-Mex delights, some of their other unique collaborations include versatile rice bowls, burgers, nacho-based entrées, and some pretty delectable dessert pickings. 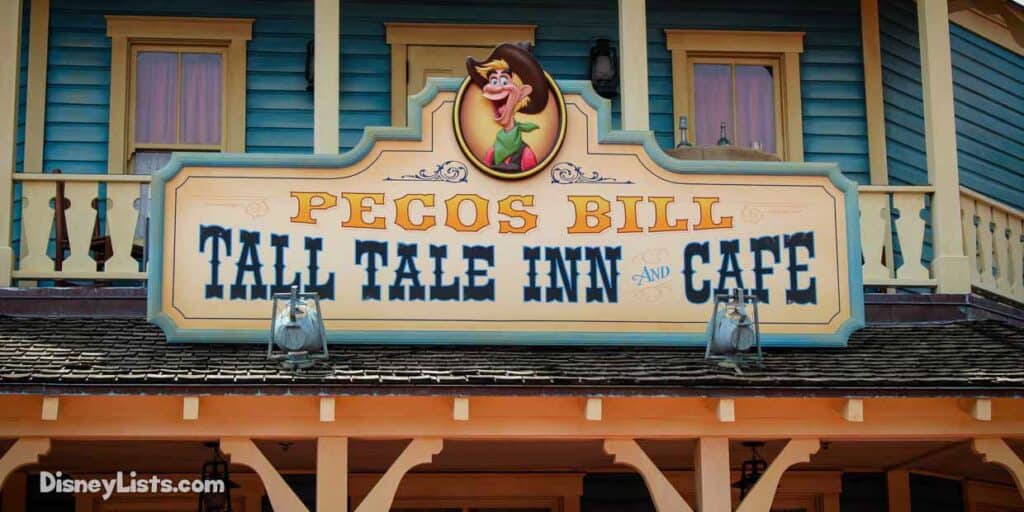 In adherence to a very intricately woven southwestern motif that this establishment is rightfully known for, given its location in the Park, Guests will find a fairly casual, comfortable setup of wooden chairs and tables wherever they so choose to sit. While the most popular place to set your plate down is within the main interior dining room, some choose to dine al fresco in the quaint little courtyard just outside. Oddly enough, however, far fewer ever opt to make the venture to the eatery’s upper level—probably because there are so many that don’t even know there is one! 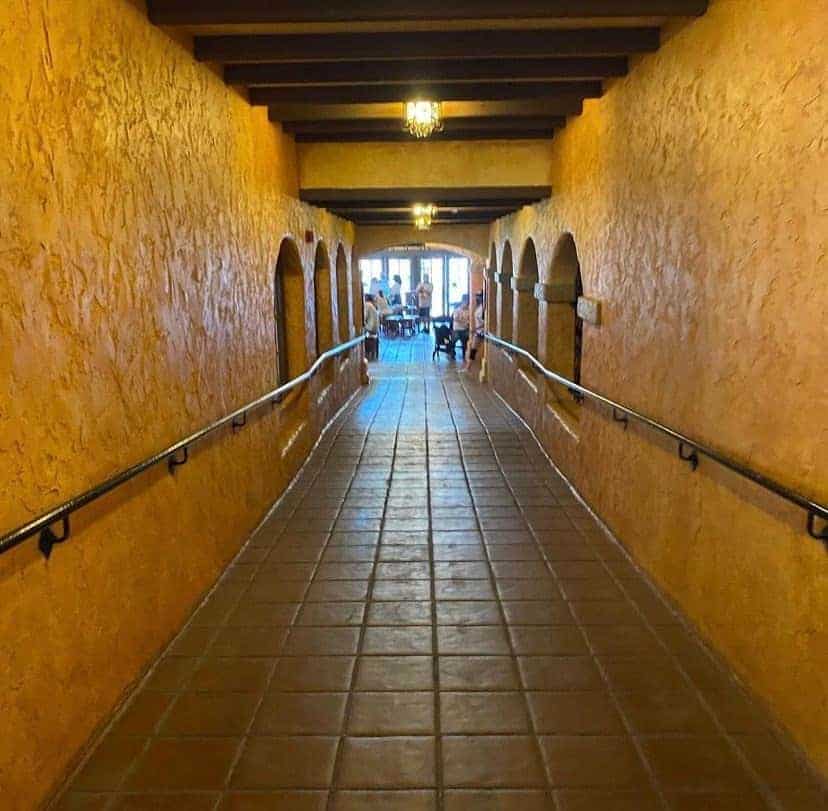 But how can that be, with this is a pretty popular place that’s always buzzing? There’s even a sign pointing out the fact that there is additional seating right up the ramp that so many hungry folks are prone to overlook. The upper-level dining area is a smaller, far more peaceful area and even has a little balcony leading off of it with yet more private seating and lovely views of the surrounding Frontierland scene. 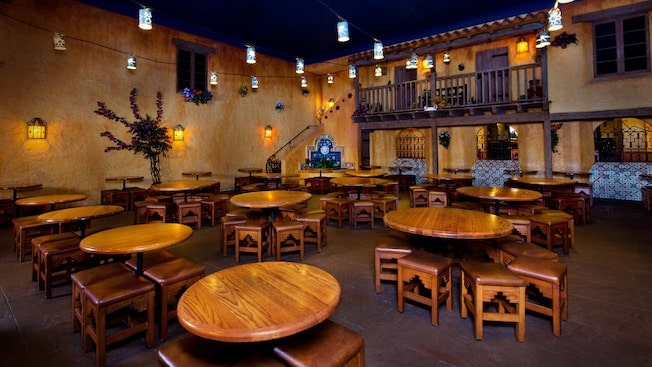 Most visitors to the Magic Kingdom are familiar with this quick-service Fantasyland staple, partially sharing building space with the famed “it’s a small world” attraction. In fact, there are even sections in the restaurant that directly overlook the attraction’s boats. 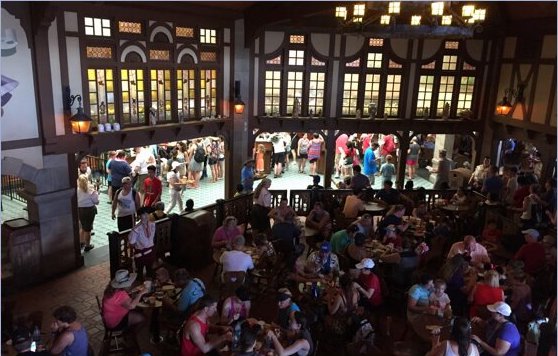 The name couldn’t be more obvious in denoting that the restaurant is themed after the Walt Disney Animation classic Pinocchio from 1940. Flatbread pizza is what’s primarily on the menu here, along with a couple of other picks. And while we can hardly say the food is spectacular, it does well in serving the purpose of feeding hungry Guests looking for a convenient go-to all the same.

Most of the seating at Pinocchio Village Haus is on the main level. And it is here that you will find those seats overlooking the “it’s a small world” boats we previously mentioned.

Because this is a pretty popular place to come, things can get fairly crowded here, especially around midday. But if you’re looking for a much more secluded spot where to have your meal, look no further than the restaurant’s second story! Sure, it requires walking up a set of stairs with food in hand, but the quaint, further-removed balcony set up high above the main dining room will be entirely worth it! Needless to say, sound does tend to travel, especially in this admittedly louder-than-usual place. So, if you still find the echoing sounds surrounding you to be a bit noisy even as you dine at such a far-removed zenith, the great news is that there is also an outdoor patio off the second level affording you scenic views of Fantasyland as you dine. 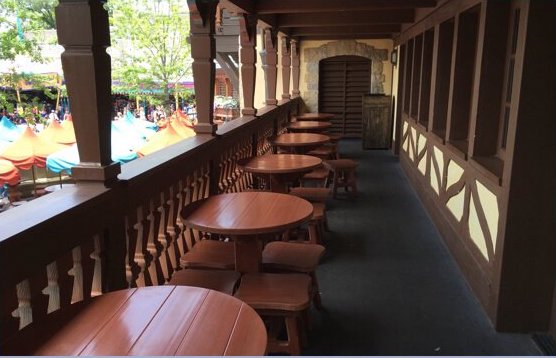 Here is another pizza spot worth noting, this one at Disney’s Hollywood Studios, located on Grand Avenue right in the heart of the beloved Muppet section of the Park. In fact, this establishment works perfectly into the Muppets motif, with none other than the Muppet character of Rizzo the rat serving as the restaurant’s owner. And you thought Remy from Ratatouille was the only culinary mastermind rat out there! But Rizzo does pretty well for himself in dishing up various pizza styles and makings along with other provisions, like subs, salads, and other vittles. 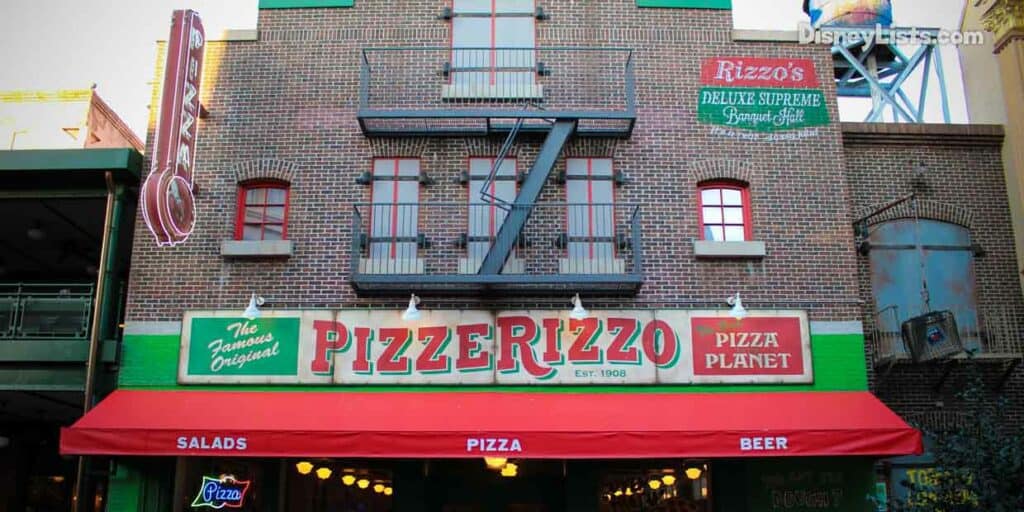 The interior of the quick-service establishment is comfy and casual, with plenty of tables and chairs to gather around. But again, you should take note of the crowds that tend to culminate here around the clock, primarily dominating the lunch and dinner scene. But the good news is that additional upper-level, as well as al fresco patio seating with elevating views overlooking this surrounding section of the Park, are right within your reach. We recommend the latter, as even the inside upper-level seating can sometimes get pretty busy. Just take your meal outside and head on up to the building’s upstairs covered patio. It’s a guarantee that you will not be facing the same stifling crowds out here, and it’s an absolute charming compliment on fair weather days. 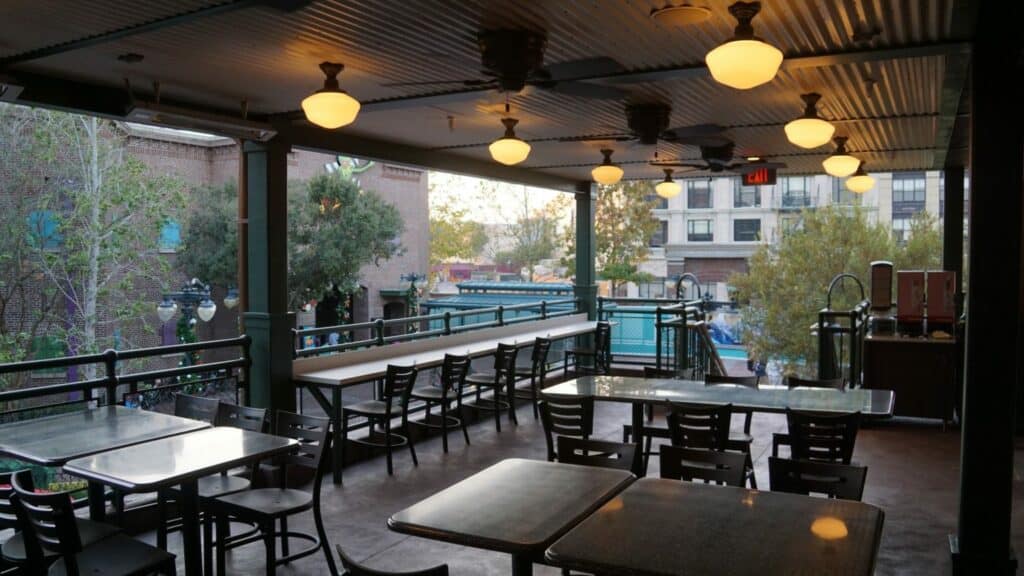 Related: Top Pizzas You Can Get Around Walt Disney World

There are so many different lounges and restaurants encompassing the scene at Disney Springs, and many such establishments are notable for having multi-level seating. Not all, however, can be counted as best-kept secrets or locations that nobody talks about though. But there are still some that get overlooked or lost in the shuffle when compared to easier-access first-level seating that’s a little closer to the heart of all the action. Wine Bar George is one of the best examples of such a scenario. 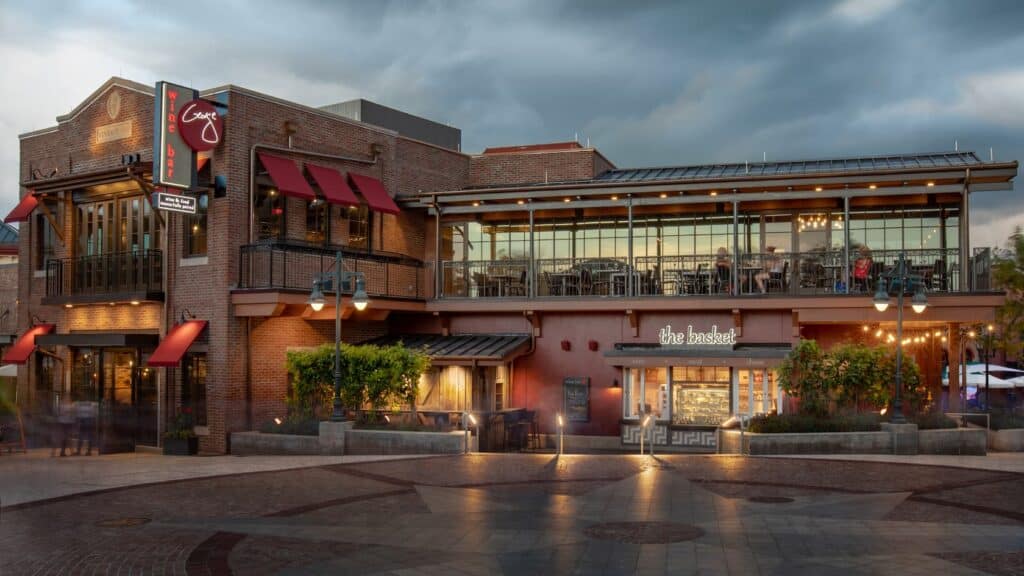 Founded by Mater Sommelier George Miliotes, Wine Bar George is a fabulous estate-style, the industrial-themed spot that’s most famous for profuse wine provisions and perfectly paired plated features. And it can be a pretty happening place to find yourself throughout the day, depending on what hour you come to call and on which day of the week it is. Note, they’re pretty popular for weekend brunch services and around dinnertime on any given day of the week.

We count the upstairs seating at Wine Bar George, specifically, as an absolute hidden gem. While not as secretive as some of the other features we’ve highlighted so far, it’s still surprising that more folks don’t opt for heading to the upper level. But it’s understandable given that the main central bar does happen to be located on the first floor. All the same, the scene upstairs if one of a relaxed, quieter spot, with a range of different seating options both indoor and presented along the outdoor patio. The latter presents wonderful sweeping views overlooking the Landing at Disney Springs. For our final best-kept secret reveal, we head back to the Magic Kingdom with a stop at the one and only Columbia Harbour House. A longtime staple that’s dominated the scene at Liberty Square for several years now, Columbia Harbour House is counted as one of the best-loved quick-service spots in all the Park and, by extension, Walt Disney World Resort as a whole. Chances are, if you’re a frequent visitor to Disney World, you’ve likely stopped here on several occasions. While primarily known for seafood specialties, their versatile, broad-ranging menu spans to cover many different grounded interests. In short, they probably have a bit of something to satisfy everyone. And that makes it a convenient, quaint favorite.

While you can, of course, take your fare with you and go about your way, the cozy coastal ambiance, reminiscent of the olden days, makes you want to stay and sit awhile to enjoy the surrounding scenery and props paired with some of the most palate-pleasing plated picks around. But the reality is that everyone else tends to have the very same idea. Fortunately for you, though, we’re sharing a secret on where you can go to enjoy additional onsite seating that comes with an elevated status, quite literally. That’s right, Columbia Harbour House just happens to have somewhat hindered additional upstairs seating also! With spacious, often under-utilized rooms and a continuation of the themed décor that works so well with the rest of the restaurant, discovering the upstairs dining scene here is like finding the money you had long forgotten about in the pocket of a coat you haven’t worn in a while! What’s more, you can’t beat those large window views looking straight ahead to Tom Sawyer Island—the perfect eye candy that’s dessert in itself! 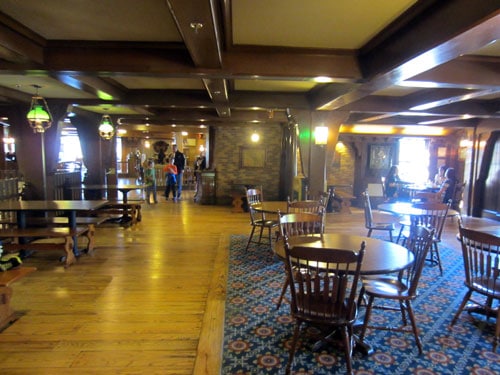 There are so many great seating locations all throughout Walt Disney World Resort as well as within surrounding Disney Springs that remain surprisingly low-key, secret spots. Wherever your ventures take you and whichever culinary quest you are on for the moment, take a look around for such opportunities to decompress and create your own private mealtime magic.