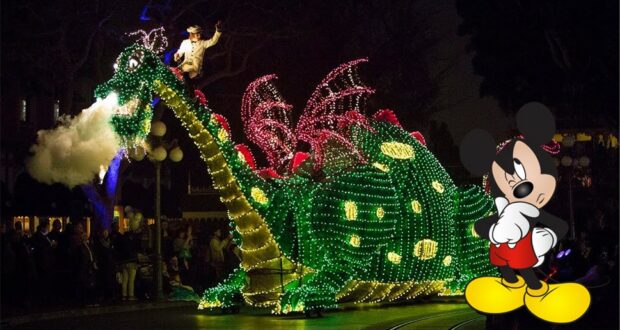 Is Disney World Preparing for a Nighttime Parade? Fans Believe So!

Disney is on a technology kick! Recently, Walt Disney World Resort rolled out its brand new MagicBand+ which is a step up from the normal MagicBand. As Disneyland Resort waits to launch MagicBand+ “later this year,” Disney fans are confused by a new MagicBand+ release, which is leading to speculation.

RELATED: MagicBands vs. MagicMobile: Here’s What to Know

Currently, MagicBand+ is available to Walt Disney World Resort Guests. It offers lights and vibrations during Magic Kingdom and EPCOT nighttime spectaculars. It also allows Guests to interact with the Fab 50 sculptures, along with keeping all the usual benefits of the normal MagicBand.

While there have been some issues with the Walt Disney World launch of MagicBand+, it seems like those issues may be populating online as well.

@shopDisney took to social media to share the photo below along with, “Electric news. Even more spectacular MagicBand+ fun arriving August 17th at 7 a.m. PT.”

That’s great news, right?! A brand new MagicBand+. But, here’s the deal… as far as Disney fandom is aware, there is no such thing as “Disney’s Electrical Light Parade,” as sketched on the MagicBand+.

Plus, as we mentioned above, Disneyland Resort has yet to launch MagicBand+, so why would Disney fans need a Disneyland-specific MagicBand+ design just yet?

Of course, Disney fans were quick to comment that the MagicBand+ “Disney Electrical Light Parade” is not the parade’s name at all, asking, “Since when is it called that?” The official shopDisney Twitter account commented back, “Thanks for your inquiry. Disney’s Electrical Light Parade and MSEP are the same thing.”

Now, the name mishap is causing Disney fans to question if there may be a nighttime parade coming to Walt Disney World Resort. One fan tweets, “Prediction of the Electrical Light Parade going to WDW but maybe not MK? Maybe HS?”

That is an interesting thought as Disney has yet to announce if Disney’s Hollywood Studios nighttime spectacular, “Star Wars: A Galactic Spectacular,” will return or an opening date yet for Fantasmic!

Another fan notes, “Since there is a name change wouldn’t that indicate that its coming back to WDW?”

With the name confusion and the fact that Disneyland Resort has not launched MagicBand+ yet, Disney fans are confused, to say the least. What does this MagicBand+ mean… or is the Disney fandom so eager for a nighttime parade at Walt Disney World that they will wish upon any star they have a chance to?

The Main Street Electrical Parade is a nighttime parade that features stunning floats and live performers covered in over 600,000 electronically controlled LED lights, along with an unforgettable synchronized soundtrack. The parade recently returned to Disneyland Park but ends on September 1, 2022.

Of course, this is all speculation among Disney Park fandom. The hope is fans will hear more about what Disney Parks plan to offer at the 2022 D23 Expo in Anaheim, California, on September 9 – 11, 2022. We will be sure to keep the Disney Fanatic readers updated as we learn more!