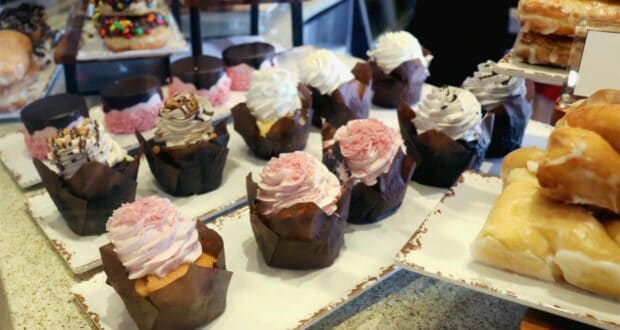 Decadent desserts are always in abundance at Disney World, so you really don’t need to use a special occasion as an excuse to sink your teeth into a delicious treat. But with National Cupcake Day happening on December 15 and various limited-time holiday and 50th Anniversary Celebration cupcakes currently being offered at so many locations throughout Walt Disney World Resort, now is the optimal time for cupcake lovers to take notice. Here we are highlighting the top 20 tasty cupcakes to seek out if you are in Disney World right now.

Related: Unique and Creative Brownie-Based Treats You Can Get At Walt Disney World

This delightful little dessert is a signature staple from Animal Kingdom Park’s Harambe Market, and is comprised of a yellow cake loaded with white chocolate mousse filling and a sweet buttercream topping. Setting off the Lion King theme is an edible image of Simba, framed by an orange and yellow icing mane.

This limited-time seasonal specialty delivers on flavor as a gingerbread-flavored cupcake coated with cream cheese frosting, and a white chocolate bear tops it all off. You can get this novelty goodie at various locations throughout Disney’s Animal Kingdom Park, including Creature Comforts, Flame Tree Barbecue, and Restaurantosaurus.

This dual chocolate-vanilla cupcake combo is on the menu at The Mara at Disney’s Animal Kingdom Lodge; it comes as a chocolate cake base, coated with chocolate and vanilla buttercream on the outside and a delicious chocolate custard filling on the inside.

As a holiday exclusive, Centertown Market at Disney’s Caribbean Beach Resort is offering this enticing eggnog flavored cupcake, which consists of spiced vanilla cake with an eggnog mousse filling and a crowning adornment of spiced whipped cream and a chocolate garnish. While this is a limited-time offering, other permanent cupcake fixtures are offered here as well, including the popular Mickey and Minnie character cupcakes.

Head on over to Kona Island at Disney’s Polynesian Village Resort and pick up one of these spicy cinnamon concoctions, which are comprised of apple filling and cream cheese icing garnished with tropical fruit salsa and Mickey macarons.

There are mouthwatering staple cupcakes available at this Magic Kingdom-based confectionery year-round, but in keeping with some of their more exclusive limited offerings, we’ve listed the following:

Related: 10 Things We Love About the Main Street Confectionery

14. Twice Upon a Cupcake

The Main Street Confectionery isn’t the only “Main Street” goodies hub to offer up savory cupcakes. Available now for a limited time at the Main Street Bakery is this holiday-themed specialty, which comes as a Christmas tree-topped vanilla cupcake with a red velvet Hidden Mickey.

This cupcake is a regular on the menu at BoardWalk Bakery, and its consistency is pretty straightforward. But in honor of the ongoing 50th Anniversary Celebrations throughout Walt Disney World Resort, the Bakery is also currently making a 50th Anniversary Celebration Cupcake, which comes as a compilation of marshmallow cream and gold crisp pearls.

As a holiday special, Rosie’s All-American Café at Hollywood Studios is offering this delightful treat through January 4. This dessert is a buttercream-topped yellow cupcake garnished with snow flurry sugar and an Olaf topper that glows!

Space 220 is one of the newest palate-pleasing contenders over in EPCOT, and the restaurant’s signature dessert so far is the Cosmic Cupcake. This decadent cupcake features a chocolate devil’s food cake with a crown of Space 220’s exclusive galactic frosting.

This simply scrumptious rendition of red velvet cake awaits your indulgence over at El Mercado de Coronado food court, on location at Disney’s Coronado Springs Resort. This location also features a number of other assorted cupcake varieties as well, including the Funfetti feature and the flavorful Cheesecake Cupcake.

It’s mostly all about Mickey and Minnie at the Gasparilla Island Grill over at Disney’s Grand Floridian Resort & Spa. For starters, there is the fan-favorite Minnie Mouse Cupcake, served up as a cookies-and cream-filled chocolate cupcake with ganache. Then there’s the 50th Anniversary Mickey EARidescent Cupcake, filled with lemon curd and topped with blueberry mousse and an EARidescent glaze. As for holiday exclusives, they are currently showcasing a Red Velvet Wreath Cupcake and a Very Minnie Mouse Cupcake. The first has a red velvet base filled with cream cheese mousse and crowned with a vanilla buttercream wreath and a chocolate bow. The second option is a more festive take on the usual Minnie Mouse Cupcake; it includes buttercream, cookie ears, and a chocolate holiday bow!

Savor a taste of the South Pacific with an enticing array of tropical treats at this eatery onsite at Disney’s Polynesian Village Resort. Here are their featured cupcake offerings:

There’s plenty to roar about on the menu at Roaring Fork over at Disney’s Wilderness Lodge. But one of their most famed fan favorites is the Campfire Cupcake, which is a chocolate cupcake with chocolate rocks, buttercream, and marshmallow. Another unique offering to note is their Peach Melba Cupcake, which is a peach melba and raspberry compilation loaded with a peach filling.

Please your palate at Artist’s Palette over at Disney’s Saratoga Springs Resort & Spa with this delightful answer to confectionary cravings. The Bullseye comes as a peanut-butter-mousse-filled chocolate cupcake topped with chocolate and peanut butter buttercream and a Bullseye white chocolate coin. A second suggestion is the Milk & Cookies Cupcake, which is a cookie-dough-filled vanilla cupcake with sweet cream and a cookie on top. There is also a special 50th Anniversary Cupcake here; this one is a vanilla cupcake with blackberry sauce, white chocolate mousse, vanilla buttercream, and festive trimmings!

This seasonal offering is being served up in two locations at the adjoining Yacht and Beach Club Resorts (the Beach Club Marketplace and the Market at Ale & Compass). Presented as a vanilla cupcake covered in vanilla buttercream, this tantalizing treat gets topped off with a decorative Santa hat and accompanying chocolate mouse ears.

You can still enjoy an array of scrumptious cupcake offerings even if you’re cutting gluten from your diet; just head over to Erin McKenna’s Bakery NYC over at Disney Springs and they’ve got you covered with a versatile range of flavor options! Featured hits include their Brownie Cupcake, Blondie Cupcake, Toastie Cupcake, Lemon Cupcake, and their classic take on the good old Vanilla.

It is perhaps this familiar favorite at Disney Springs that dishes out the most variations in cupcakes. The word “cupcake” is in their name after all, and it just so happens to be one of their most popular menu items. From personalized picks to classics and limited-time offerings, we’ve got quite a lineup in our recommendations to share with you:

If you like the versatile selections that we’ve highlighted here, then you should know that what we’ve covered is just the icing on the “cup” cake. From Candy Cauldron to Goofy’s Candy Company, Zuri’s Sweets, and a myriad of other venues, so many Disney dining destinations offer cupcakes on a rolling basis (with new flavors and seasonal specials always emerging). And with that, we end on the sweetest note of all.