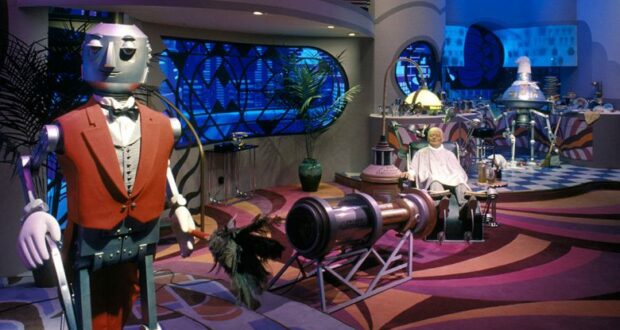 A Fond Flashback to Past Disney World Attractions

We’ve seen attractions come, and we’ve seen attractions go throughout the Walt Disney World Resort’s more than 50-years in operation. And while there have been some that guests have bid good riddance to without ever looking back, like Stitch’s Great Escape—often deemed one of Disney’s worst-ever attractions to date, others have met with more sorrowful departures that continue to be lamented even to this day. That’s why we’re featuring a fond flashback look into the past Walt Disney World attractions we once loved so well and wish were still around.

First on our list is this more recent stunt show, which was a featured staple over at Disney’s Hollywood Studios for more than a decade. Located at what was once the Park’s Streets of America, the area was altogether done away with and revamped into what is now the admittedly more popular Star Wars: Galaxy’s Edge. All the same, this predecessor stunt show, which spanned nearly 40 minutes in length and featured multiple vehicle stunts, thrilling chases, and even pyrotechnical effects was a highly enjoyable viewing pleasure for many who still wish for its return in some format or another.

Once upon a time, back when Disney Springs was still known as the Disney World version of Downtown Disney, there was this indoor interactive theme park hub comprised of various simulated and otherwise virtual attractions. Throughout its nearly 20 years in operation, DisneyQuest showcased a wide range of attractions, some more short-lived than others. Here’s a list of the most memorable ones:

Up until a couple of years ago, the seasonally presented Osborne Family Spectacle of Dancing Lights dominated the holiday scene at Disney’s Hollywood Studios. What started humbly as an Arkansas man’s light display for his six-year-old daughter eventually grew into a much larger, highly acclaimed spectacular. Eventually, having met with legal issues and an order to halt operations, Disney stepped in and relocated the spectacular where it grew into a tradition spanning two decades. It was a largely ornate dancing lights show set to music, and many rue its eventual ceasing of operations. On an encouraging note, however, it’s worth mentioning that the majority of lights used in the spectacular have since been donated to the Florida-based Give Kids the World Village to be used for their Night of Million Lights event, a fundraiser for the continuance of granting wishes to critically ill children.

Both the East and West locations for this technology-laden umbrella hub at EPCOT were long-time housings for a wide range of innovation-related attractions. Throughout the years, attractions have come, gone, and changed altogether. Both opened back in 1994 with the West location closing several years ahead of its sister in 2015. East followed suit in 2019. With its versatile virtual reality-minded offerings and other attributes throughout the years, Innoventions hasn’t been gone for too long, and the wounds are still pretty fresh for fans who haven’t yet had a chance to process the loss yet.

Most fans would agree that an attraction starring Disney’s most iconic mouse couple, Mickey and Minnie, has been long overdue. But the fact that one finally arrived at Hollywood Studios only at the expense of a long-time famed favorite getting the axe has left some with divided receptions. The Great Movie Ride was undeniably one of Disney’s most popular original attractions, presented as a dark ride drive-through transcendence into classic films. The fourth wall even came down at one point—making each ride a unique event. Understandably, there are many who still bemoan Disney’s closing of this cult classic back in 2017—an unnecessary sacrifice at the sake of Mickey & Minnie’s Runaway Railway, some feel.

Those who visited EPCOT’s Future World anytime throughout the 1990s and early 2000s will undoubtedly remember this former pavilion, which focused its theming primarily around health, wellness, fitness, and the human body in general. In fact, it was even home to that infamously grotesque simulated ride experience Body Wars. Also on-location was the Cranium Command theater presentation. When sponsorship by MetLife ended in 2001, the pavilion survived on a seasonal operations format for several years but eventually folding up entirely in 2007.

Some would say that this dark ride water attraction over at EPCOT’s Norway Pavilion never really went away. It remains largely intact to the original, including most of the same tracks and even the riding vessels, despite its having been revamped into a Frozen-themed attraction. But it cannot be denied that the two are separate entities with two very different identities. There are still those who gladly prefer the original Norway-focused original, with the original props, animatronics, narrative, and its exit video presentation.

Guests to Disneyland can still get their fill of a Mickey Mouse and Friends-themed section, showcasing all the beloved characters’ various living quarters. But unfortunately, the folks on the East Coast no longer have such. One of the unfortunate casualties of the Magic Kingdom’s Fantasyland expansion, Mickey’s Toontown had been a proud park staple prior to that, going all the way back to 1988 when it first opened as Mickey’s Birthdayland. Two years later it was renamed Mickey’s Starland before becoming Mickey’s Toyland shortly in 1995. But it was from the years 1996 to 2011 that it was known by its most popular title—Mickey’s Toontown Fair. While more of a walkthrough exhibit than an actual attraction per se, this remains one park pleasantry that’s greatly missed by fans of Disney’s Fab Five.

This EPCOT cult classic premiered back in 1983, closing once temporarily in 1994 before reopening again in 1995. Operations continued up through 1999 then until they ceased permanently, being replaced by Mission: SPACE in 2003. Like Spaceship Earth, Horizons was a dark ride that took riders via an omnimover throughout various themed sections, all in exploration of the elusive future. Part one of the ride presented a “Looking Back at Tomorrow” feature with a futuristic showcase of the modern world as conceived during the Vernian era through the 1950s.

OMNIMAX screens allowed guests to discover modern ideas and technological advances as once envisioned to be the future. The major part of the ride, however, was an animatronic showcase of futuristic scenarios for living in a modern world. This was the very first Walt Disney World Resort to feature multiple endings. Riders were able to make selections from three options on where to go for the final portion of the ride. Horizons may be gone but it will never be forgotten, and many rank this up there with The Great Movie Ride as one of Disney’s more controversial removals.

The extensive history behind this EPCOT attraction, which was part show and part ride, begins back in 1982. It eventually closed in 1996 when it was redone as Ellen’s Energy Adventure (featuring Ellen DeGeneres) and continued its run as so up until 2017. Both versions had many of the same components at work, including their common objective for showcasing energy, science, progress, and technology. Both ran for a total of 45 minutes in length and featured a pre-show film, two theaters by which guests would travel back and forth from, and a primeval diorama presentation at the core of the experience. While this experience did have a fan following, it goes without saying that the highly anticipated Guardians of the Galaxy attraction soon to occupy this space has many looking ahead rather than backwards.

Changes are forever taking place in regards to the parade lineup at Walt Disney World Resort. At present time there aren’t any nighttime parade spectaculars currently taking place within Magic Kingdom Park, but for the last several decades there have been ongoing switch-ups between two such evening excitements. We are of course referring to both the Main Street Electrical Parade and Spectro Magic Parade. The first installment of the former began operations in 1977, concluding its run in 1991. At that time the Spectro Magic Parade took its place. That run lasted until 1999 until the Main Street Electrical Parade came back for a reprisal in 1999, running through 2001. Then came the return of Spectro Magic for a tenure lasting until 2010. The Main Street Electrical Parade rose once more in 2010 and finished its most recent run in 2016. Now we are all waiting in wonder of when a possible nighttime parade will come back to Magic Kingdom Park.

Related: Why Doesn’t EPCOT Have a Parade?

We all know of Disney World’s hottest and coolest water parks—Typhoon Lagoon and Blizzard Beach. But do you remember the earliest water park at Disney World—Disney’s River Country? You may, since it’s only been closed since 2001 and for a time existed in tandem with the other two. Having opened back in 1976, this was a beloved spot to cool off at for decades before closing in 2001. At first, it was believed to be only a temporal closing before Disney made the official heartbreaking announcement in 2005 that the water park would remain closed permanently.

We’re not talking about the current location of the same name at Disney’s Animal Kingdom Park. Going back several years prior to the Animal Kingdom’s opening, this literal island was the one and only Discovery Island. When it first opened to the public in 1974, though, it was originally called “Treasure Island.” After being recognized as a zoological park it assumed its newer, more widely accredited name. During its tenure, it operated as a place guests could visit for an additional admission cost to observe wildlife. The island closed in 1999 and all the animals were relocated to Disney’s Animal Kingdom.

There was a predecessor to the current Skyliner system that exists in Walt Disney World today, although this attraction, which was one of the originals to premier when Magic Kingdom Park first opened in 1971, sometimes gets forgotten altogether. All the same, it operated all throughout the 1980s and 1990s, eventually ceasing operations in 1999.

Here’s another attraction that still exists in Disneyland but has ended operations within Walt Disney World Resort. It was the one and only Mr. Toad’s Wild Ride, which opened in 1971 and closed in 1998, to be replaced by The Many Adventures of Winnie the Pooh. While we all love the latter dark ride, there are many who wish the delightful former one didn’t end up on the chopping block.

Another fondly remembered original classic to open at Magic Kingdom Park back in 1971 was this attraction based on Disney’s 1954 film 20,000 Leagues Under the Sea. Presented as a 20-minute-long submarine excursion through lagoon depths laden with unique aquatic curiosities, the attraction eventually closed back in 1994, to be replaced by Ariel’s Grotto from 1996 to 2004. It is now the current location for where the Seven Dwarfs Mine Train stands. Though now it is gone, this is one deep-dive into reminiscing never to be forgotten.

Related: YouTuber Creates Virtual Ride Through of 20,000 Leagues Under the Sea Attraction

Throughout Walt Disney World’s extensive history there have been many other now-retired attractions as well, all of which still hold fond memories for the guests who remember them well. From recollections of old to newer memories in the making one constant you can always count on with Disney is its forever enduring magical experiences that forever remain alive in our hearts.