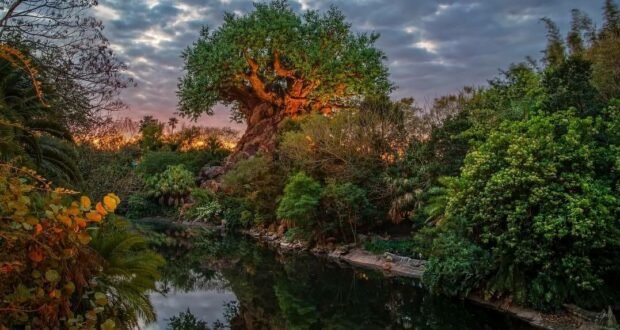 Every last Friday in April we observe what’s annually hailed as Arbor Day. It is the ultimate acknowledgement and tribute to the importance of trees with praise and recognition also rightfully given to the vital role that all plants play in maintaining life on this planet.

Disney is no stranger to embracing the essentialness of trees and plant life. We’ve seen the wondrous works of transplanting living trees throughout Parks and Resorts along with the establishment of attraction-based marvels of an arboreal making. And let’s not forget about the several character creations of humanized tree-like figures with feelings and emotions that have been integral throughout Disney Entertainment. So, without further delay, here is a tribute to the many trees of Disney in all their arbor awesomeness!

Before we explore the deep-running roots of some of our favorite locations throughout Disney Parks and Resorts, we must first give a shoutout to a couple of notable character embodiments of tree personifications, all of who we’ve enjoyed seeing in Disney Entertainment throughout the years. From animated works to live-action presentations, here’s a lineup of four pleasing plant-based characters we feel are worthy of an Arbor Day acknowledgment.

Trees from “Flowers and Trees”—One of the short segments making up Disney’s famed Silly Symphony cartoon from 1932 is an eight-minute story called “Flowers and Trees.” The plot opens on a woodland springtime fancy with flowers, shrubs, and plants of all sorts basking in the beauty of the season, rejoicing with song and music. Spring means love is in the air, and this specific story follows two “dueling” trees—one old and nasty and the other young and robust, competing for the attentions of a female tree.

Related: Disney’s “Flowers and Trees” (1932) Inducted into the National Film Registry in the Library of Congress

Grandmother Willow—This sagely old willow tree, with a spirit that is very much alive, is featured in Disney’s animated adaptation of Pocahontas from 1995. Presented as an astute supporting character, Grandmother Willow serves as a mentor of sorts to the title character.

Groot—This well-liked character, who is part of Marvel’s Guardians of the Galaxy franchise, is presented as being a plant-like humanoid alien creature with a very limited vocabulary.

Related: These Songs Will Make Up the Soundtrack for Guardians of the Galaxy: Cosmic Rewind

DiVine—While never featured in any Walt Disney Film Production, this fine vine is still very much an integral part of Walt Disney Entertainment. Designed to be the personification of Mother Nature, DiVine is a staple character who makes sometimes discreet rounds throughout Disney World’s Animal Kingdom Park. Her full foliage costume and lack of spoken word makes it sometimes difficult to spot her, despite standing between 7 and 16 feet in height, as her portrayer wears stilts while performing.

Disneyland is home to a number of unique tree transplants, which you will find all throughout its two theme parks. Here are just some awesome arbors worth noting, for those who are interested.

Storybook Land Mugo Pine—Want to see the oldest living tree at Disneyland Park? Then ride along with the Storybook Land Canal Boats and pay special attention to that two-foot-tall pine right next to Geppetto’s Workshop. It’s that famous Mugo Pine Tree of Disney legend you may or may not have heard of. And what’s most impressive of all is the fact that it is believed to be well over 150 years old!

The Dominguez Family’s Canary Island Date Palm—While not as old as the Mugo Pine, this date palm tree fixture near Disneyland’s Jungle Cruise attraction in Adventureland has been on Disney property the longest. It was planted on what was then the Dominguez family’s land as a wedding gift back in 1896. Therefore, as a sentimental request in honor of his grandparents, when Ron Dominguez sold his farm to Walt Disney, he asked that one of the original trees be spared—and this was it.

Petrified Tree—While we confirmed that the Mugo Pine is the oldest “living” tree you’ll find at Disneyland, there actually is one other tree that has millions more years to its credit. You read that right; there is an actual portioned petrified tree from what is now known to be Colorado Pike’s Petrified Forest on display here. The tree is believed to be between 55 and 80 million years old, and was perhaps either a sequoia or redwood.

The Halloween Tree—Dedicated to Disneyland in 2007 by Ray Bradbury, author of the 1972 novel The Halloween Tree, this delightful oak can be found close to the Golden Horseshoe Saloon. And in true faithfulness to its name, it gets decked out with the works around Halloween time.

Batuu Wishing Tree—Another awesome themed arbor is this inclusion, which is part of Star Wars: Galaxy’s Edge. As its backstory recounts, residents of the Black Spike Outpost make wishes on this tree, tying ribbons to the branches to symbolize each wish made. As the fabric on a specific ribbon disintegrates, the wish comes true.

Anyone familiar with EPCOT’s World Showcase knows that it is host to several different pavilions, representative of varying nations from all around the world. And in keeping with authentically conveying the international feel and appeal at work within these pavilions, there are many tactics incorporated, both on a grand scale as well as those that rely on more subtle yet meaningful touches. And the transplantation of trees, plants, and other foliage representative of a given part of the globe makes for a fitting subtle touch indeed. Here’s a list of just some of the trees to be on the lookout for within EPCOT’s World Showcase.

Disney’s Polynesian Village Resort at Disney World is home to another very notable transplant, not of native origin. It’s the one and only Kukui Nut Tree, also known as the Candlenut. As the state tree of Hawaii, it adds just the right touch to the resort’s overall theme. Guests looking to spot the tree can do so right outside the Great Ceremonial House.

While many of the representative trees within a designated area at Disney Parks and Resorts are authentic transplants, those baobabs you see when riding along with Kilimanjaro Safaris at Disney’s Animal Kingdom Park (you know, those upside-down trees) are really just very cleverly done replications by Disney Imagineers. Consider the size of the trees you pass along the way. It would have been out of the question to transport baobabs measuring those proportions. Therefore, Imagineers got to work in creating their very own constructs onsite. On a side note, there was at one time a sole living baobab tree nearby the Tusker House Restaurant, but sadly it did not survive.

This central symbol of Magic Kingdom Park’s Liberty Square stands tall and regally as a living Southern Live Oak, decked out with 13 hanging lanterns to represent the 13 original colonies. And while its roots have always been on what encompasses Disney World property it was not always at this precise location, at Liberty Square. Standing over 60 feet tall and weighing more than 35 tons, Disney made what was one of their most impressive tree transplants of all time when they moved this oak seven miles from the location where it originally stood.

The Animal Kingdom’s Tree of Life

Like the baobab trees of the Kilimanjaro Safaris, this iconic emblem to Disney’s Animal Kingdom Park is an entirely fabricated construct. All the same, it is a masterfully done display, standing at an impressive 145 feet and featuring a vast and versatile array of more than 300 different animal shapes intricately carved into it its elaborate trunk. An attraction in and of itself to behold, Guests garner great joy in getting up close and personal to the tree while venturing along Discovery Island Trails. But the tree also additionally serves as the home to the theater-based 3-D attraction It’s Tough to Be a Bug!

There are many other notable trees, both living and otherwise that we could go on highlighting in this bountiful bucolic tribute to Disney Trees. And just as deeply rooted magic continues to grow and flourish all throughout Disney Parks and Entertainment, we can surely expect to see plenty more arboreal awesomeness bloom into being.