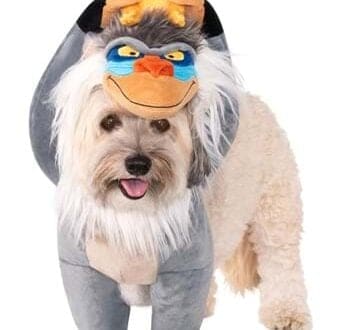 Feeling excited about Halloween? Or, perhaps your dog has a dress-up trunk (like any typical non-fur child would, right?) and you’re looking for your next purchase for it. Either way, animals in clothing is a top 5 cute thing to look up on the Internet, wouldn’t you agree? There’s no better way to infuse a smile or laugh into your day than to see a picture of an animal wearing a pet costume.

Because we care about you, our Disney Fanatic friend, we’ve compiled just that- a charming photo collection of decked-out dogs. Of course, we wouldn’t just give you any old dogs in clothing pics. These are all adorable pics of pooches in Disney costumes. Looking to get your dog a Halloween costume and need costume inspiration? Just want to smile at dog pictures? Enjoy playing, “Who Wore it Better?” If any of these sound like you, then you’ve come to the right place.

Before we go on, a word about feline friends: If you’re looking for a cat costume, you might be interested in knowing that many of these costumes are described as being suitable for dogs or cats on their respective websites. Most, if not all, of the costumes pictured here are from a popular and trusted costume brand: Rubie’s Costume Company. These costumes can be found at both online at Rubie’s, as well as at Shop Disney and Amazon. You can also find a variety at brick and mortar retailers like Target, PetSmart, PetCo, Spirit Halloween, and Party City.

But back to the cats: Good luck convincing a cat to wear a costume!

Here are some of our favorite stylin’ dogs… may these pictures make your day better and your smile bigger!

How about a little “Hocus Pocus” to kick things off? Channel your inner Sanderson sister this Halloween and get a group costume together. Be sure to let your dog be Winifred… how hilarious is a dog chasing the kiddos thinking, “I smell children?”

These Maleficent costumes are so fierce, it’s terrifying! If you’re in the mood for a dark costume this year, you can’t go wrong dressing as the Sleeping Beauty villain. Who wore it better: the pup, or the person?

Related: Here’s Exactly How to Be Disney’s Maleficent For Halloween

This Little Mermaid Halloween costume pairing will make all the other poor unfortunate souls wish they had these costumes! We know Ariel’s no villain, but this Ursula costume steals the show!

Pixar and Marvel and Star Wars, oh my!

Toy Story has so many great characters that the costume possibilities are endless! This whole crew looks great, but the dog costume is a standout. There’s something about a dog dressed as another animal (or in the case, dinosaur) that’s especially funny. If your dog prefers to be a more prominent character, let him run the show and be Buzz Lightyear, instead! This costume is adorable to infinity and beyond!

Next up is another Pixar costume that’s truly Incredible- but the question is, who wore it best? Can’t choose? This would make the perfect group or family costume!

Disney fans, if you haven’t yet accepted Marvel into your Disney world, maybe this will change your mind! What’s more magical than a puppy in a Thor costume? I especially appreciate the irony here: A dog who is probably afraid of thunder, dressed as the God of Thunder.

Star Wars fans: If you can Jedi mind trick your pets into wanting to wear costumes, here are a few pretty spectacular ones. Which adorable pet costume is the winner- the Ewok or Baby Yoda (Grogu)?

What better costume choice than our beloved Mickey and Minnie? I’m pretty sure your neighbors will feel just like they’ve stepped into Walt Disney World when they encounter these guys.

Winnie the Pooh is a timeless classic that is adored by Disney fans of all ages. If you have a pack of pups looking to get in on the holiday spirit, consider a group costume. How cute are these guys?? If you want to recreate this look, you can find these costumes on various Halloween costume websites, as well as Amazon.

In Lilo and Stitch, Stitch had to pretend to be a dog to “blend in” to Lilo’s community. What better switch-up could there be than a pup in a stitch costume? The answer: none. The only acceptable alternative is this adorable baby costume.

We’re totally transported to a Whole New World with these adorable costumes based on characters from Aladdin. If the pup in Beauty and the Beast can be transformed into a footstool, then why not transform your dog into a magic carpet? Of all the costumes, that’s my favorite- and probably the only one a dog will actually wear without major protest. If you manage to get your dog into one of these other outfits, please let me know what sorcery you used to make it happen!

Related: An Aladdin Character Makes It Into the “Disney Fab 50”

Is your furry friend more of a Disney princess girl? If she’ll let you put her in a dress, there are plenty of amazing princesses to emulate. While I love the idea of matching your princess pup, the Prince Charming and Cinderella combo is even cuter! Still, I can’t imagine getting a dog to keep a wig on. What do you think? Are the wigs purely photo editing, or are there massive treat bribes going on here?

Last but not least… one final “Who Wore it Better?” for your consideration. For the male dog in your life, you can’t go wrong with this princely Beast costume. The question is.. who wore it better? The man, or the mutt?

There are other options for Disney fan pet owners who have costume-averse fur babies. Some dogs simply will not wear anything with a headpiece, which does limit your options. My corgi, for example, really can’t wear a costume that has anything that covers her big pointy ears. Even a dog hoodie is unlikely to work for a pup with erect ears. Still, there are lots of way to show spirit on Halloween and love for a favorite Disney character. Consider giving your canine companion a festive bandana or bowtie or Disney collar and leash instead!

Does your canine compadre enjoy dress-up fun? We’d love to hear about your favorite pet costume, or even see a picture!