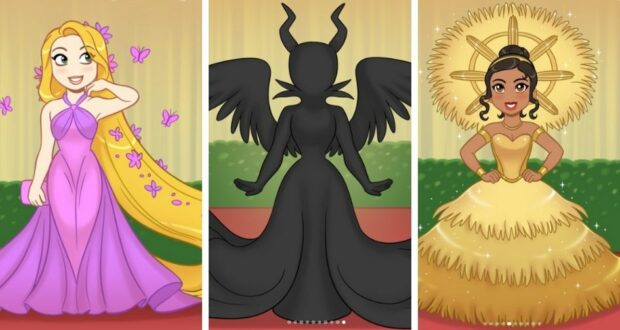 Cassey Ho (aka Blogilates) is a Pilates instructor whose Youtube channel has almost seven million followers. She is best known for her energetic Pilates workout videos and her well-received line of athletic wear (which includes a Disney-princess-style cape!), but Blogilates is also known for her series of comics called Blogicomics. Disney or Marvel characters have been featured several times in the series, and now the Disney princesses are getting a chance to take over the Met Gala red carpet in the series!

The real Met Gala just happened as it always does on the first Monday of May, so Blogilates (and Daniel Kordek, who illustrates the comics on Instagram) was clearly inspired by that in creating this Instagram series. Check out the original post and the princesses’ outfits below!

Rapunzel always sticks to her beautiful pastel aesthetic from the 2010 movie Tangled, so it’s an obvious choice for her at an A-list event.

Even though Ariel’s outfit is an Ursula costume, it actually wouldn’t be out of place at an event as outlandish as the Met Gala!

Cinderella has a lot going on at home, so she might not want to stay at the Metropolitan Museum of Art throughout the entire night (no matter how exclusive, A-list, and fancy the Met Gala is). She’d probably skip all of the famous celebrity-filled after-parties, too!

Outlandish and impractical outfits are the Met Gala’s bread and butter (just ask Katy Perry or Kim Kardashian), so a huge gold ballgown and headpiece like the one that Tiana is wearing above would definitely fit in on the red carpet!

Gender-specific pronouns have been a big topic in Disney Parks lately, but the warrior princess Mulan does seem like a Disney princess who would sport a suit at any big event, any time of the year.

Blogilates and Daniel Kordek took care to acknowledge the debate between pink and blue dresses that Aurora (aka Sleeping Beauty) was involved with in the 1959 movie Sleeping Beauty. Her sleepiness is sometimes referenced by Cast Members portraying this Disney princess during Meet and Greets, so it’s not surprising to see Blogicomics referencing that trait too!

Many celebrities like Billie Eilish or Cara Delevigne choose to make political statements with their clothing on red carpets, particularly enormous red carpet events like the Met Gala at the Metropolitan Museum of Art, so Pocahontas wouldn’t waste that opportunity either. This Disney heroine is also joining the new version of the Disney World show Fantasmic soon!

Snow White might be getting her own live-action remake very soon (despite the accompanying controversies) now that Rachel Zegler and Gal Gadot are finishing up filming the movie in Pinewood Studios, but her original 1937 self would definitely have brought her seven dwarves along for the red carpet entrance!

One of the strangest and most viral events from last year’s Met Gala was Kim Kardashian’s arrival in a black outfit that completely covered her and made her look a lot like Peter Pan’s shadow. Now Blogicomics has brought Maleficent into the mix to try out the bizarre outfit choice, too!