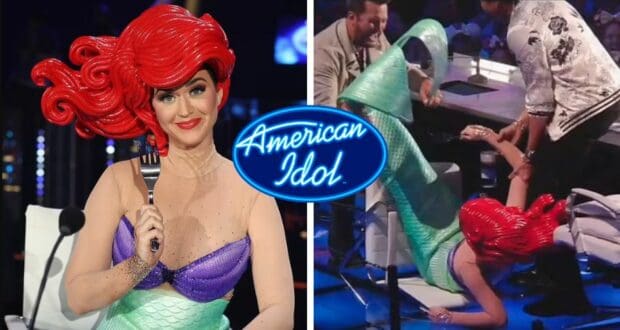 Any Katy Perry fan knows that the famous singer and American Idol judge is not afraid to embrace over-the-top looks or costumes for red carpets. However, the singer and performer also clearly likes to go all out for Disney Nights (which are fan-favorite nights on American Idol in which the contestants in the ABC singing competition show perform iconic Disney songs), and in the show’s May 1 episode, Katy Perry chose an Ariel costume that proved to be very difficult to move in!

During this particular Disney Night for the show, Perry sported a costume based on the Disney princess from the 1989 movie The Little Mermaid in honor of the episode’s theme. There were many outstanding performances from the contestants on Sunday night on ABC, but the judge’s costume definitely stole the show!

Katy Perry was unable to walk while wearing the mermaid outfit (not to mention an enormous Ariel headpiece), and actually had to be wheeled in on a dolly for the show’s taping. She also fell out of her judge’s chair as soon as the episode started, causing many laughs from viewers, and had to be helped back into the chair by the other judges (Lionel Richie and Luke Bryan) as well as American Idol host Ryan Seacrest!

The singer (who is engaged to Pirates of the Caribbean actor Orlando Bloom) shared some glimpses of the intensive process behind-the-scenes on Instagram; check out the rigors of getting into this Ariel outfit below!

This is not the first time that Katy Perry has worn an intense costume and portrayed a Little Mermaid character. She also has previously dressed as the Disney villain Ursula from the movie for American Idol! Did you watch this new Disney Night episode of the ABC singing competition show?