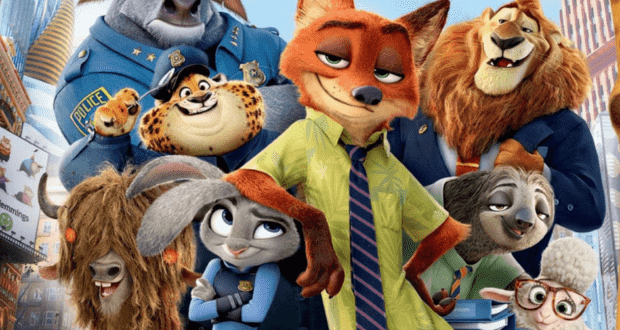 Can you believe it’s already been seven years since Walt Disney Animation Studios released its CGI anthropomorphic animal hit Zootopia? A true motion picture marvel in so many ways, Zootopia keeps with a forever-current theme focused on overcoming life’s challenges, beating the odds, and breaking down stereotypes.

What’s more, it may very well be the most universally-relevant movie for all to find enjoyment in, regardless of age, ethnicity, and whatever situations or struggles one may be dealing with personally. And for these reasons, along with so many others, we’re recommending Zootopia (2016) as our Disney+ family movie night pick for the weekend.

Set in a world where different mammal species that were once distinguished for being either predator or prey have since learned to live together in harmony, Zootopia follows the story of an ambitious bunny named Judy Hopps. Despite all the naysayers, Judy grows up with a lifelong passion for one day becoming the very first rabbit police officer.

By working hard and going above and beyond to make her dream a reality, Judy at last lands a job working for the Zootopia Police Department. But it’s a bit of a letdown, to say the least, when she finds herself confined to only performing parking duties when she knows she is cut out for so much more. But since she is no stranger to the task of having to prove her potential time and time again, Judy is up to the challenge.

While the job is largely monotonous, Judy does have a couple of adventures along the way, one of which introduces her to a fox named Nick Wilde, whom she later discovers is a slick hustler that previously had her fooled. Then there’s a weasel chase that lands her in the Chief’s office right around the time that the wife of a missing otter in an ongoing missing mammals case walks in.

When all is said and done, Judy is suddenly saddled with solving the case of the missing otter in just 48 hours, or her job is on the line. The trouble is, there’s next to no evidence at all and her only lead for the mission at hand is none other than that shifty sly fox Nick Wilde.

Defining and Breaking Down Stereotypes

The Walt Disney Company has a longstanding history of showcasing unique characters that stand out and don’t fit the bill for what is typically touted as ordinary or conventional by society’s standards. In fact, some of their most beloved creations have revolved around deviations in either a standout plot or the characters incorporated into those plots.

Disney’s Zootopia not only continues to carry out this time-tested tactic of going against the grain, but it further innovates the ways in which it is done.  First, they get right to the root of the preconceived stereotypes at play within the film’s setting in a straightforward sort of way.

Next, they turn to the anthropomorphic animal key players who still exude the traits of their specified species while also having learned to adapt according to a newer, more developed way of life. They then address issues in which the aforementioned preconceived notions of individuals still play a prevalent role in everyday life, in determining what one is and is not capable of from a biological standpoint, despite living in a more accepting world than ever before.

But then they throw a curveball in doing something truly original and unexpected: they shatter these preconceived stereotypes by creating characters that truly break free from the mold by being originals.

There is a lot of back and forth at play throughout the film with characters who resign themselves to living in the shadows of what society deems for them versus those who do not give in to the opinions of others. And then there are humorous subtle nods thrown in that poke fun at general stereotypes, like elephants having good memories, rabbits being good at multiplying, and sloths being slow.

Zootopia does an excellent job of delivering on its motivational message for following dreams and overcoming adversity brought on by prejudiced thinking. And the character of Judy Hopps serves as the perfect example to learn from and follow.

She never lets the fact that she was born a bunny get in the way of her dreams of one day becoming a police officer. Even when those closest to her try to dissuade her and nobody truly believes it is even possible, Judy perseveres all the same, going on to do the seemingly impossible by beating the odds and believing in herself.

All the other characters featured in the movie also face their own obstacles and personal struggles along the way. For instance, there is that defining moment when we get to learn more about Nick’s childhood and the reasons why he resorted to living up to society’s perception of foxes rather than going on to make something more of himself.

We also see Mayor Lionheart’s concern with his public image at a crucial time in the film when it is unfavorable to be classified as a predator. Then there’s Clawhauser’s demotion from being the front desk officer for similar reasons, as well as Chief Bogo wanting Judy to be the public face of the ZPD since she is not a predatory species.

And then let’s go back to that elephant ice cream shop scene for a moment where elephants reserved the right to refuse service to foxes. It seems to be a pretty symbolic and resounding scenario that’s all-too-familiar in real life.

Related: New World Discoveries, an Appreciation for Nature, and Forbidden Romance: Why Watching Disney’s ‘Pocahontas’ This Weekend Is the Ultimate Family-Friendly Way to Reignite Appreciation for Bucolic Beauty and Respect for Cultural Diversity

Animals Take the Edge Off

Discrimination, intolerance, and inequality are all very sensitive issues to tackle. But somehow, Disney’s production of Zootopia handles the otherwise controversial content in a very ingenious way: they call in the animals. Somehow, the utilization of different anthropomorphic mammal species takes the edge off of the situations that play out in the film while still effectively driving home the point that preconceived notions are wrong.

And it may even be a way to thoroughly address existing tensions without offending viewers. Because these are animals and not human beings, there is a safe balance between being able to relate to certain characters on some levels while retaining a healthy distance comparatively. Furthermore, bringing in vastly diverse species creates even more dynamics to work with. And let’s face it, a large portion of the film’s entertainment comes primarily from watching all of the different creature interactions onscreen.

Despite its presentation as a CGI work of animation, Zootopia is not a movie intended solely for the entertainment of kids. In fact, the film works in its fair share of humorous notes that are intended for the amusement of older viewers and would otherwise be largely lost on younger ones. From references to The Godfather to the hilarious connection between sloths and the DMV, the humor of Zootopia is sure to bring out the laughter in every member of the family.

Zootopia remains one of the top streaming picks on Disney+, and it is pretty easy to see why. While there have been many movies that appeal to certain audiences and interests, Zootopia has something truly unique to offer: a motivational message about overcoming life’s limitations and believing in yourself. In echoing the film’s familiar refrain to “Try Everything,” we strongly encourage you to “try” this film for a weekend movie night get-together with the family!