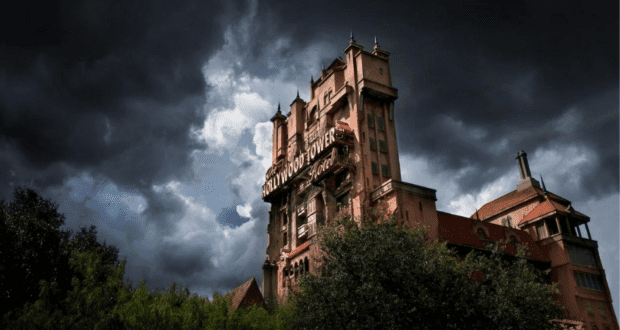 It is perhaps the most recognizable attraction at Disney’s Hollywood Studios and can be counted among the most iconic ones in all of Walt Disney World Resort. We are, of course, talking about that high-reaching sinister specter standing tall and stately in the distance—The Twilight Zone Tower of Terror. Considered to be a Disney World rite of passage by many, this thrill ride draws inspiration from the cult classic television series of the same name, which ran from 1959 through the 1960s.

From its exciting thrills to its elaborate theming, there’s just so much to find delight in when riding this most timeless attraction. So, here we are providing you with eight eerily entertaining facts we think you’ll find thrilling about Disney’s The Twilight Zone Tower of Terror.

Related: 13 Chilling Facts About The Tower of Terror in Hollywood Studios

8. An Original to Walt Disney World

Whereas so many other iconic attractions at Walt Disney World are replications of preexisting Disneyland constructs, The Twilight Zone Tower of Terror is an entirely novel attraction, once exclusive to Disney’s Hollywood Studios. Having premiered back in 1994, this ride was built to represent a Hollywood Horror presence within the Park. And while many earlier concepts were considered, including a creature-themed awards show attraction and even a Hotel Mel feature with Mel Brooks, the decision ultimately ended up being to establish a thrill ride instead. Since then, The Twilight Zone Tower of Terror has been reproduced at other Disney Parks around the world, including the Disneyland version in California that ran from 2004 to 2017, as well as later installments at Tokyo Disneyland Resort and in Disneyland Paris.

Related: Ungranted Wishes: The Disney World Attractions That Never Were

The decision to create a thrill ride representing the Hollywood Horror scene may be considered a lightning strike idea. But that’s not the only lightning surrounding the attraction. The whole storyline revolves around a most bizarre event, which resulted in the Hollywood Tower Hotel—the basis for the ride—getting struck by lightning on Halloween night, no less, back in the year 1939. And as an eerie coincidence, the ride itself has actually been struck by lightning on several occasions, the first time dating back to when it was still in its construction phase.

While an accompanying pre-show narration by a famous personality is nothing out of the ordinary, Guests may find it a bit of a shocker to see the long-deceased host of the original Twilight Zone series, Rod Serling, serving as presenter for this attraction. What’s more, it’s all done up so impeccably to the show’s conventionally familiar format that it leaves many wondering just how they managed to pull it off at all! Well, it was certainly a multitiered process, to say the least. First, there’s the video recording in which Rod Serling introduces the attraction itself. This footage was taken from the introductory lines of the Twilight Zone episode “It’s a Good Life.” The first lines, up until a certain point in the intro, are all original to Serling’s discourse. From there, the clever talents of professional voice actor Mark Silverman take over, finishing out the dialogue. Through the magic of Disney Imagineering, there was also a bit of handiwork at play by incorporating various other clips of Serling narrating for other episodes. These were used in order to match the mouth movements riders see on screen with what Silverman is citing. Additionally, Imagineers adjusted the audio quality accordingly, making the whole presentation play out in true Twilight Zone tradition.

Walt Disney Imagineers certainly did their homework in bringing this attraction into being. In fact, they watched all 156 episodes of the original Twilight Zone series repeatedly, in order to get everything just right. And it certainly shows with all they managed to include. In fact, the entire attraction itself is a homage to the series and contains very specific Easter Eggs from various episodes. The Library is without a doubt the biggest treasure trove of callouts, as familiar fans should be on the lookout for the following:

When boarding the elevator, you may want to take a closer look at the Inspection Certificate. Diehard fans may chuckle a bit when they see that “Mr. Cadwallader”—a character revealed to be the devil in the “Escape Clause” episode did the inspecting. And if you observe the date closely, you’ll find that the inspection was done on the same fateful night the attraction is themed around—October 31, 1939. On another interesting note, getting back to the Twilight Zone connection, you may observe that the permit number reads “10259” which is a clever callout to the original premiere date for the series—October 2, 1959.

Another tribute to the series can be found in the Fifth Dimension scene, representative of the “Little Girl Lost” episode. Then, after the ride you may want to keep an eye out for a creepy ventriloquist dummy from the episode “Caesar and Me.”

4. Hidden Mickeys and Nods to Disney

While all the Twilight Zone references are most befitting, the attraction also stays true to Disney tradition in featuring Hidden Mickeys and other references. The latter, for instance, can be found back in the Library room accompanying the trumpet we previously mentioned. It’s the sheet music to “What! No Mickey Mouse?” Likewise, at the concierge desk, you’ll also find an actual copy of Photoplay Magazine showcasing “Four Pages of Hilarious Star Caricatures by Walt Disney.”

In getting back to Mickey Mouse specifically, be sure to look closely at the scene in which the folks disappear in the elevator. Observe the little girl in the group and take note that she is holding none other than a Mickey Mouse doll. Another keen observation representing a Hidden Mickey can be found briefly during the moment when the car leads into the elevator. Keep your eyes focused and you will notice a starfield appears at the end, which then turns into the classic Mickey Mouse shape we all love so well!

To bring together a classic hotel from Hollywood’s Golden Age you need far more than just show props to convey the working motif. That’s why many of the items used to adorn The Twilight Zone Tower of Terror’s overall setup include authentic antiques and furnishings, most of which were bought from auction houses. Artistic accents in the way of sculptures on display here even include many by the 19th century sculptor Auguste Moreau.

In creating the Hollywood Hotel, Disney drew inspiration from various real-life hotels of the day, including the Biltmore, Mission Inn, and Griffith Park. And in driving home the fact that this is to be a stately, elite accommodation, they even included the finishing touch of a plaque awarding the hotel 13 Diamonds by AAA.

Standing at an impressive 199 feet, The Twilight Zone Tower of Terror is the uncontested zenith in all of Disney’s Hollywood Studios.  It also happens to be the second tallest attraction in all of Walt Disney World Resort, falling just short of Expedition Everest at Disney’s Animal Kingdom Park by five inches. Perhaps you may be wondering why Disney would incorporate such oddly numbered measurements into their two tallest attractions rather than leveling off at even 200 feet. The reasoning is to keep in compliance with the law, as any structure standing at 200 feet or higher is legally obligated to feature a blinking red light on top in order to alert passing planes. Such incorporation would have ruined the feel, hence the 199 designation.

Once upon a time, the Twilight Zone Tower of Terror featured only one drop, rather than the multiple, randomized synchronizations riders today are accustomed to. And while the ride has adapted in order to make for unpredictable and differing experiences each time, the interesting fact is that it does not—nor has it ever—featured a full-fledged free-fall the whole way down. Techniques at work within the ride utilize a series of different pulleys and motors in order to deliver on that iconic feeling of crashing down. What’s more, the attraction always remains below 40 miles per hour even at its highest speed.

There are plenty of other interesting facts and tidbits about this most famous (or should we say infamous?) classic attraction at Disney’s Hollywood Studios. Whether you’re a fan of thrills in general or count yourself as the ultimate Twilight Zone buff, you’ll find this frightfully fun folly simply to “die” for.