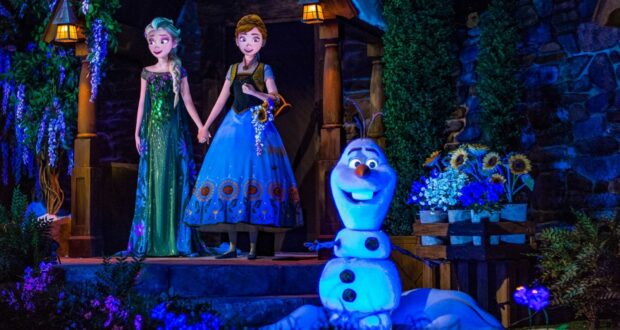 Everyone knows that Walt Disney World Resort is home to a wide range of rides suited to all different thrill levels and interests. From gentler, easygoing pursuits to more energetic endeavors, you’re bound to find just what you’re looking for, no doubt about that. And in keeping with the season of love, today we’re focusing on rides that pack an element of romance, certifying them as perfect picks for couples looking to have a most magical experience at Walt Disney World Resort.

While not a ride in the most traditional sense, this attraction over at Disney Springs really is an uplifting must-do for lovers looking to explore new heights, literally. Presented as a mounted hot air balloon, Aerophile takes guests on a 400-foot ascent where they can delight in unparalleled scenic views—a romantic endeavor in deed!

This classic over at Disney’s Magic Kingdom Park may be an unexpected recommendation. Who in their right mind would ever make the claim that a ride through a haunted house in a doom buggy is romantic? But when you consider what it entails — a dark ride with your dearest love by your side to hold your hand — you come to see that it actually does create the perfect excuse for cuddling.

Again, we present you with a beloved classic attraction that you probably wouldn’t initially think of as being romantic per se. Some would even say it’s juvenile, with all those child doll likenesses. But any slow-going boat ride through a long, scenic route can be a romantic ride when you really come to think about it.

In keeping with the idea of slow-moving boat rides being a romantic pursuit, this recommendation on location within EPCOT’s Mexico Pavilion probably doesn’t catch you off guard entirely. Besides that, the storyline involving The Three Caballeros keeps you entertained and in-tune all throughout.

And once the ride concludes, you can explore the whole market setup within the pavilion and maybe even have a romantic meal at San Angel Inn Restaurante while you’re at it.

Again, we head back over to the Magic Kingdom for another dark ride recommendation. Because love can make you feel youthful, you should unleash your inner child with this Peter Pan-themed option, sitting side-by-side with your other half, holding hands while floating above captivating scenes below.

This Frozen-inspired dark water ride over at EPCOT’s Norway Pavilion is another great cuddle opportunity to take. Ride along through an alternate follow up to the original Frozen story with original renditions of famed featured songs you probably already know all the words to. If ever there was a ride that features a romantic serenade, it’s this one!

7. Pirates of the Caribbean

This is one of the most popular water rides, largely owing to its pirate-centric theme that inspired a high-grossing film franchise which, in turn, re-inspired the namesake attraction. Guests of all ages and interests frequently flock to this destination.  Is it any wonder why cuddling couples wouldn’t follow suit as well?

Related: Virtual Ride on Pirates of the Caribbean: Battle for the Sunken Treasure at Shanghai Disneyland

Here is another boat ride themed after a major motion picture. And perhaps you and your honey even saw Avatar in the theater when it first came out. Now you can experience the action in-person, in a spectacularly illuminated peaceful ambiance that sets the mood for any romantic ride.

Related: You Can Get Married In Pandora

5. Under the Sea – Journey of the Little Mermaid

Disney’s The Little Mermaid is one of the most beloved animated films of all time. It also features what is unquestionably one of the most romantic boat ride scenes ever, serenaded by that famed melody we all love —”Kiss the Girl” no less.

So, is it any wonder that this ride at Magic Kingdom Park would come highly recommended? Get ready to cuddle up in your clamshell as you ride by and relive the magic.

There aren’t many other places outside of Africa where you can experience such a high-quality safari excursion. So why wouldn’t you want to savor the moment with the love of your life by your side throughout it all? And taking the safari in the romantic evening setting makes the excursion even more enticing.

3. The Magic Carpets of Aladdin

Aladdin is another film featuring a favored romantic scene — this one being a scenic ride through the sky on a magic carpet. And you and your sweetie can reenact the magic yourselves with this attraction on location within the Magic Kingdom.

Also note that all throughout Disney World there are other similar rides of this nature, where you can hold hands and cuddle up. The one and only iconic Dumbo the Flying Elephant is one such example, along with a couple of others.

2. Soarin’ Around the World

Love can make you feel like you’re soaring high in the sky on cloud nine. And that’s one of the primary reasons why this simulated flyby adventure, on location in EPCOT, is an uncontested favorite for many. Take in the numerous landmarks and world wonders with the love of your life right beside you through it all.

Related: 10 Fun Facts About Soarin’ That You May Not Know

At long last there is an attraction devoted to Disney’s ultimate power couple — the one and only Mickey and Minnie Mouse. Housed within Hollywood Studios, this dark ride drive through takes guests past countless scenes straight out of a Mickey Mouse short. And if you get to experience this vivid excursion as a couple, it will be just like double dating with Disney’s famous mouse greats.

In truth, any ride at Walt Disney World Resort can be romantic if it works well for you and your other half. And in addition to rides, there are various other attractions and activities to take to as well. It’s all about the magic of Disney that brings people together most of all.