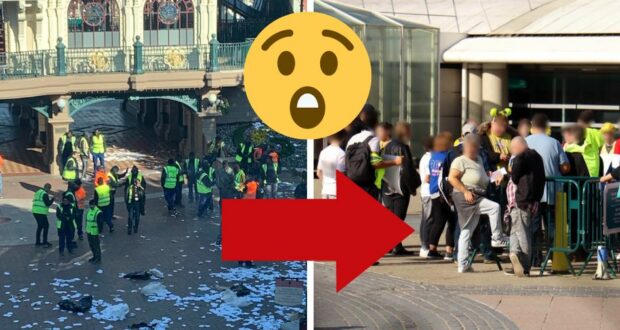 It is no secret that Disney Resort Guests and Disney Park Guests seem to be more and more disillusioned these days when it comes to Disney magic — but unfortunately for Disney, it looks like that discontent has led to tangible damage and disrepair on an international scale!

Security has been enhanced at the Resort’s checkpoints due to potential demonstrations outside Disney property against the park reservation system. pic.twitter.com/byxX8MupiR

A group of Guests Is gathered outside the SNCF train station to peacefully demonstrate against the park reservation system: pic.twitter.com/mhyJpW06ib

Customers’ grievances with Disney reservation systems and purchases like Annual Passes or Magic Keys are nothing particularly new (with Disneyland Passholders and Disney World Passholders actually filing lawsuits against Disney), but these protests have led to a real mess — literally and figuratively — for the French Disney Resort in the past, so this new Disneyland Paris protest is a significant reminder of how bad things could get!

Not all Disney fans will remember that Disneyland Paris has faced several groups of protesters in the past, with one particular standout Disneyland Paris protest taking place in 2019 when third-party custodians protested against their working conditions (and their low pay) and refused to clean Disneyland Paris. At the time, garbage and debris littered the Disney location on a shocking level.

@DisneyParis_EN @Disney paid massive money for Disney land hotel to walk around in trash and be intimidated with my children. Not good enough. #YellowVests #DisneylandParis pic.twitter.com/lhDpyA6wHG

One Disneyland Paris Guest shared photos from the French Disney Park location, saying that they “paid massive money for Disney land hotel to walk around in trash and be intimidated with my children” and that the experience was certainly “not good enough.”

Disneyland Paris Resort did reach out on Twitter, telling the Guest (@leadersandlunatics) that “we are doing everything possible to limit the disruption caused by employees of a contracted cleaning company, and we apologize for any impact that it may have.”

Dear David, we are doing everything possible to limit the disruption caused by employees of a contracted cleaning company, and we apologize for any impact that it may have. The attractions and entertainment experiences are operating as scheduled. °o°

With low pay and badly-behaved Park Guests to deal with, Cast Members seem more and more eager to leave their Disney jobs behind — and with Disney’s stance in the world of politics, many former Disney fans have been shunning or boycotting Disney vacations in order to protest against the company’s “woke” policies.

Do you remember the previous Disneyland Paris Resort protests? Are you worried that Disney-related protests will become more and more of an inconvenience for Disney’s visitors — or are you tempted to join these protests yourself?