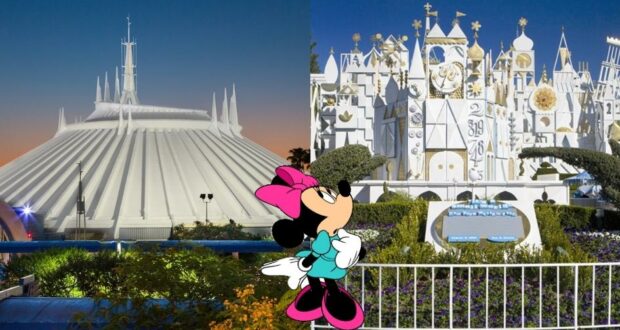 Honest Review: Which Ride Version is Better–Disneyland’s or Disney World’s?

The resemblance between Disneyland Resort and The Walt Disney World Resort–specifically Disneyland Park and The Magic Kingdom–is almost uncanny in a lot of ways. One way, in particular, is that they offer many of the same rides. Both Resorts have Space Mountain, Splash Mountain (and both will have Tiana’s Bayou Adventure), and Big Thunder Mountain Railroad. They both feature a Jungle Cruise, an Enchanted Tiki Room, Haunted Mansion, Pirates of the Caribbean, Monorail, and so much more. But each attraction carries subtle differences from its sibling, like variants across Marvel’s multiverse.

It should be noted that in order for me to enjoy some of the exclusive Disneyland and Disney California Adventure attractions in the time I had, I was not able to experience every Disney World variant. But out of the ones I was able to get in, here are my definitive answers. I decided that my day at Disneyland would begin the same as all of my days at Disney World: with a monorail ride. There was really no close call on this answer.

I should mention that the Disneyland Monorail is still great! The Mark VIIs are far nicer than the 30-year-old Mark VI Monorails in operation at Walt Disney World. Four Guests can still sit in the front with the pilot, and six can sit by themselves in the very back. I also love that Disneyland’s Monorail drops off Guests deep into the Theme Park, and it is really cool to ride on the first ever Monorail system built in the Western Hemisphere. 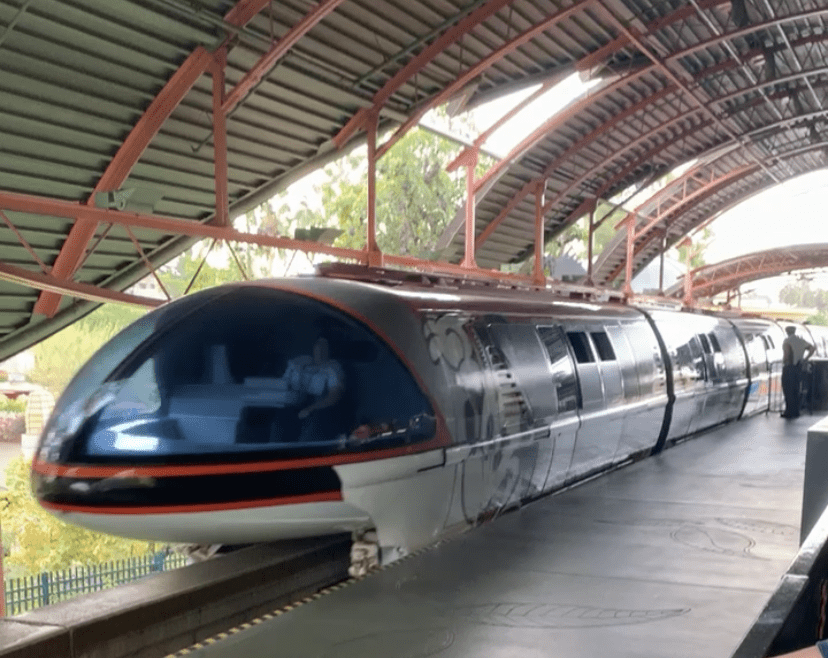 However, the Disneyland Monorail is far more of an attraction than the legitimate mode of transportation that is provided by The Walt Disney World Monorail System. The Downtown Disney District station feels equally far from both the entrances of Disneyland and Disney California Adventure as well as the Disneyland Hotel it was originally built to serve. And, for some reason, the Powers that Be did not add a stop at either the Disney California Adventure entrance or Disney’s Grand Californian Hotel and Spa–which the track literally goes through.

The Disneyland Monorail is also significantly smaller than its Disney World counterpart, offering no standing room. Guests are required to sit, which forces a capacity limit. The trains also have no a/c or climate control, which means that their operational status is determined by the weather, shutting down during the day when temperatures get too high or when the rain rolls in.

But most significantly, Guests need to provide valid Theme Park admission and a matching Disneyland Park Reservation in order to experience the Monorail. Meanwhile, Guests can hop aboard the Disney World Monorail without needing a ticket or Park pass, and they can take as many round trips as they want. We also have the Monorail Bar Crawl. 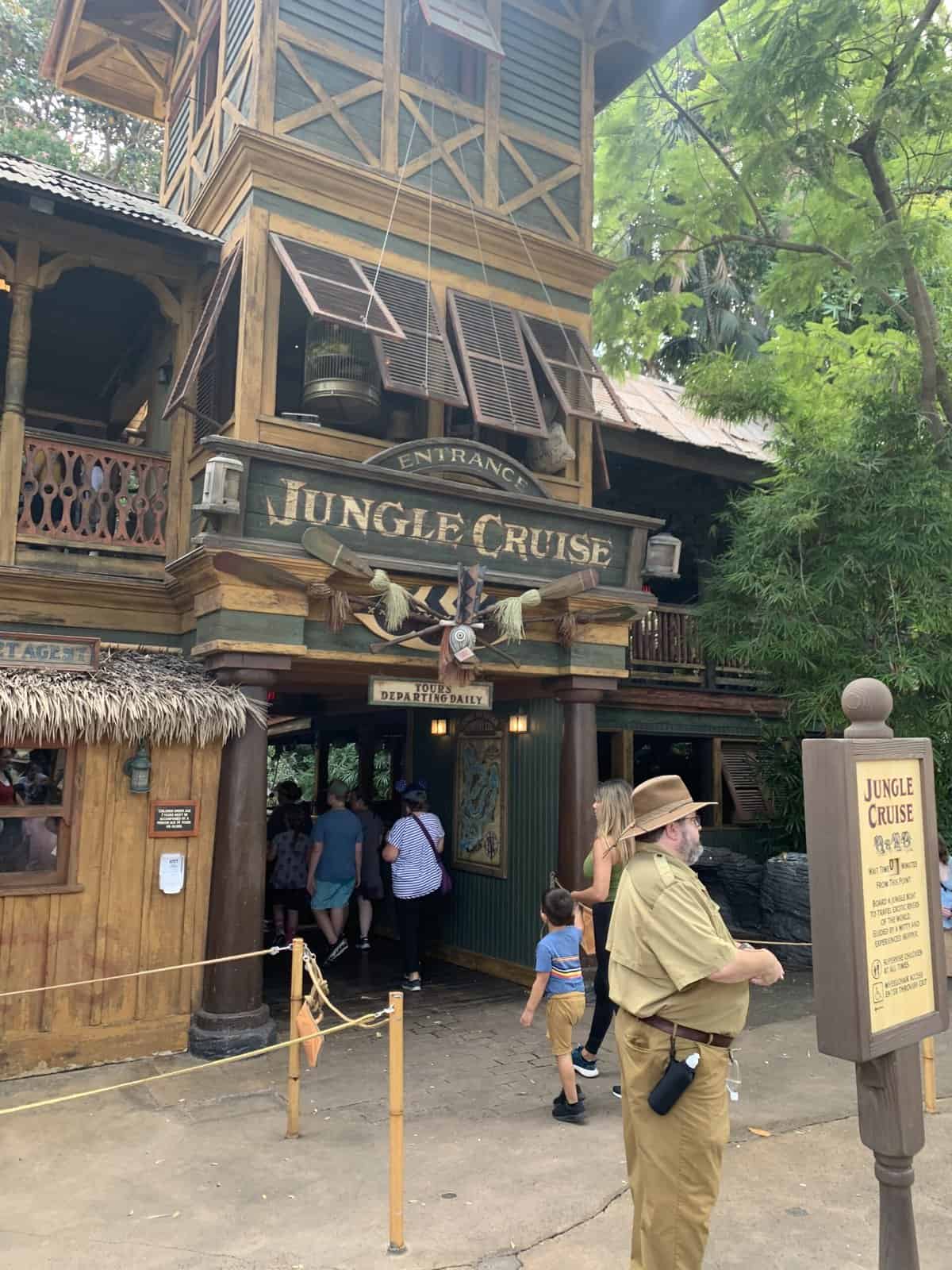 It also became clear that Disneyland’s Jungle Cruise was built with an animal-first mindset, while Disney World’s was built with a focus on the best setup for scripts. Disneyland was also able to incorporate the ferocious tiger without having to waste time on a “spooky” jokeless temple. The Disneyland variety also had a more interesting queue through the Jungle Cruise headquarters, which featured the map from its movie on the wall. 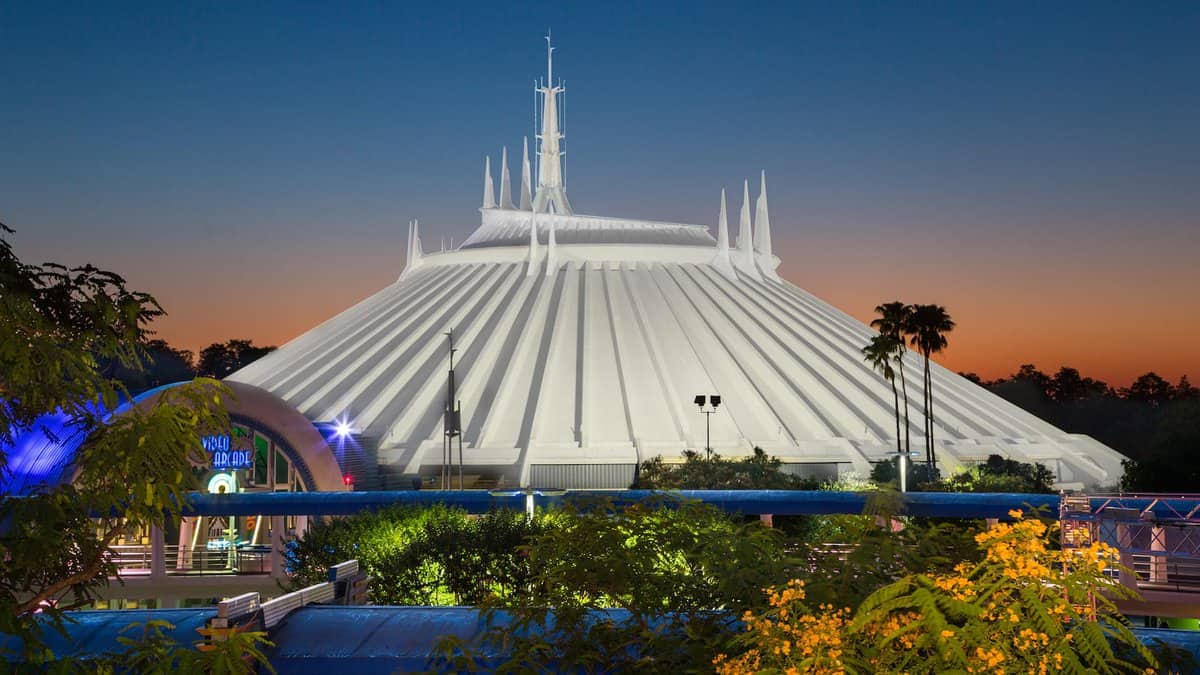 Disneyland’s Space Mountain is undoubtedly a cool ride, and it has better graphics than its older Disney World counterpart. But, it still does not beat the original Tomorrowland rollercoaster in Central Florida.

A major revamp of Space Mountain is bound to be on its way–if for anything but to change the track, so Guests no longer feel as if they are going to be decapitated. But even in its current state, there is no comparison. 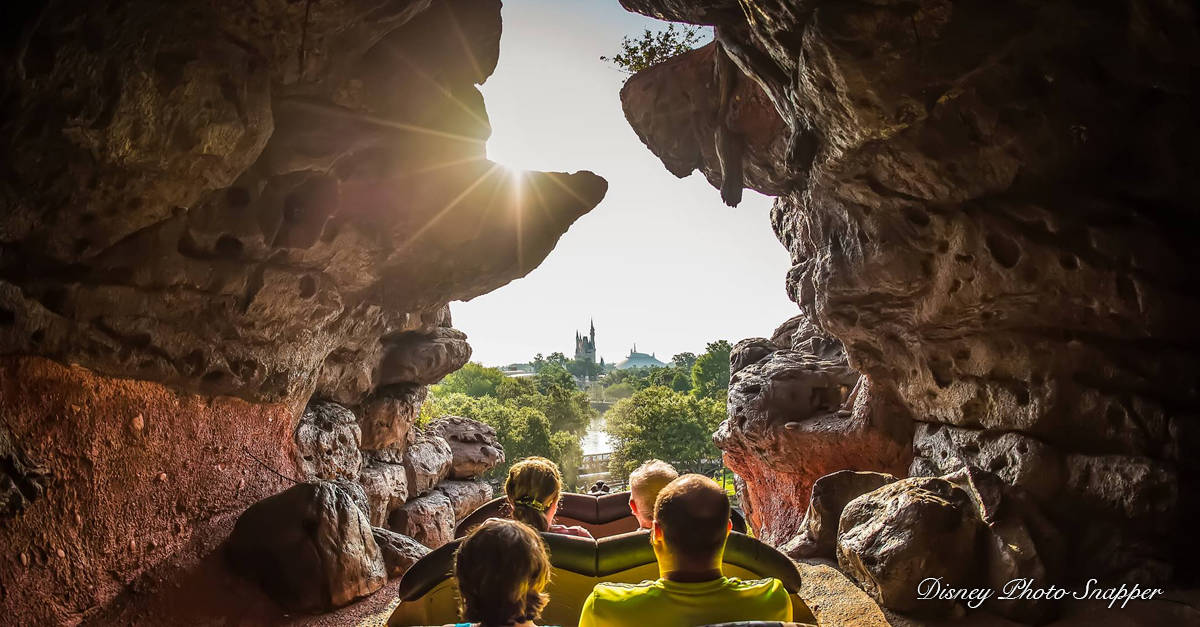 The Splash Mountain at Walt Disney World is also better than the one found at Disneyland for one reason only: The log boats. Disney World’s splash mountain features log boats that sit Guests two-by-two with plenty of space to fit backpacks and souvenir bags that one is bound to carry throughout a Disney day, and those bags actually have a chance to stay dry throughout the adventure. Disneyland’s Splash Mountain offers the exact opposite. Seated single-file, I was stuck holding my bags in my lap. I was also stuck in the very front of the log, totally exposed.

I understand that it is Splash Mountain and that I am bound to get a little wet. At Disneyland, I got SOAKED. I got more soaked on Disneyland’s Splash Mountain than I did at Khali River Rapids in Disney’s Animal Kingdom Park. The locals behind me, who were also getting drenched, were screaming that it was not a normal experience, but I didn’t believe them. 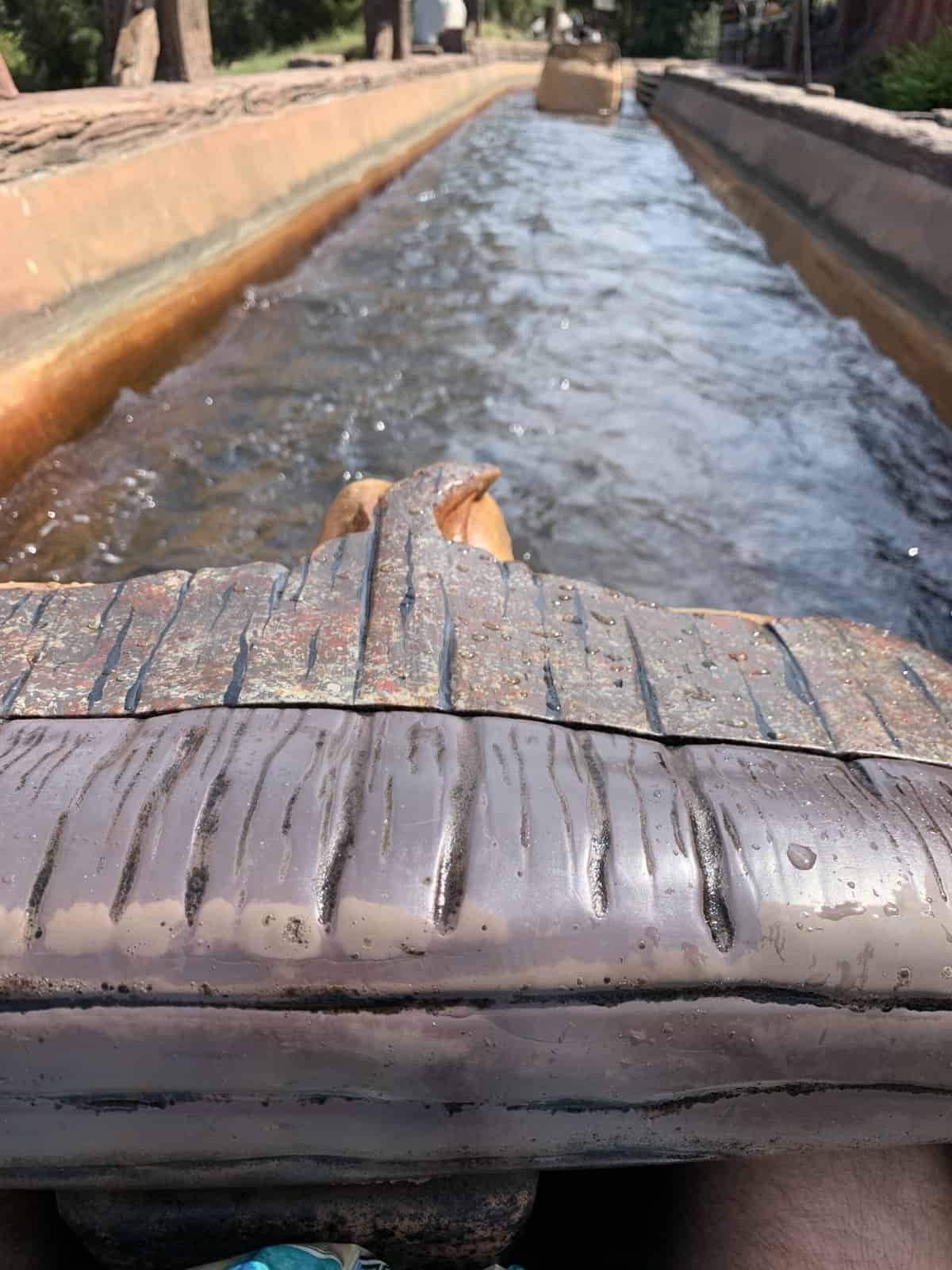 Now, I admit that I probably would have enjoyed it far more if I had some kind of warning and was not cradling a laptop and iPhone-filled backpack on the day before I was supposed to do live reporting on the biggest Disney fan event in three years. But even with that self-awareness, I would still prefer Disney World’s Splash Mountain due to the fact that I feel more secure in those seats than I ever did at Disneyland. 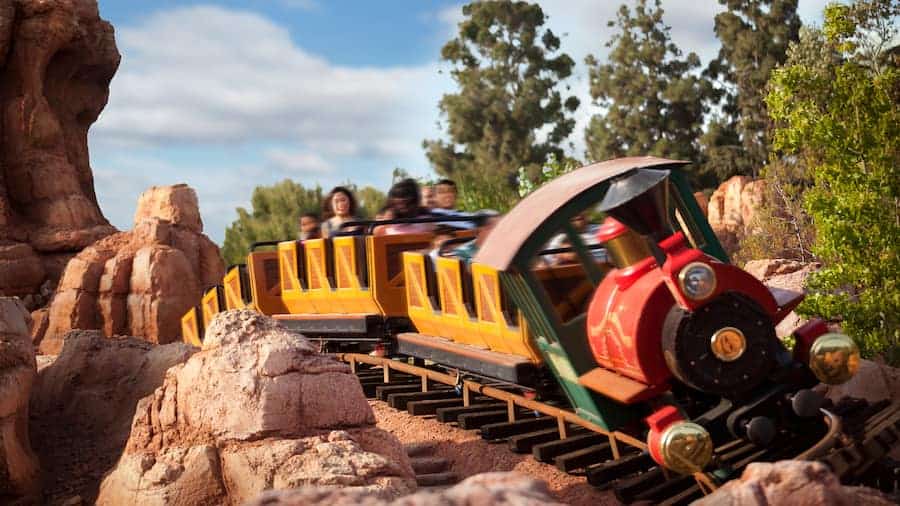 This is the one Mountain ride that Disneyland does better than Disney World, in my opinion. While the caverns at the opening of Disney World’s variant are cooler, Disneyland’s offers a better overall experience. The ride itself is smoother. It is easier to get to from the central hub, and the quality of the ride itself is better.

The biggest difference can be found in the third incline segment. Disney World’s Big Thunder still tries to convince its Guests that the tunnel is about to cave in and the activity already broke the track. Meanwhile, Disneyland rethemed that segment to appear as if Guests were passing through a demolition site with dynamite blowing up all around the train. Sometimes it is the little things that can make something better. Even though people have been complaining about some cosmetic issues recently, Walt Disney’s original “it’s a small world” attraction at Disneyland is uncontestedly better than its Walt Disney World Variant.

For starters, Disneyland lets “small world” be the Fantasyland landmark it is supposed to be, sporting the iconic facade from Walt Disney Imagineers Mary Blair and Rolly Crump. They are also able to decorate it special for the Holidays to brighten up all of Fantasyland. Disney World hides its “small world” attraction inside beneath the lackluster guise of a medieval Fantasyland festival tent. 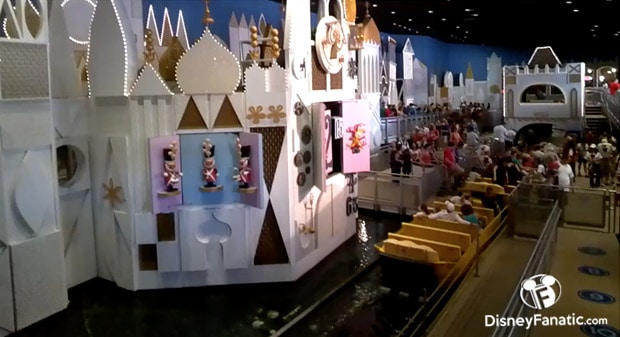 I also appreciate how Disneyland incorporated the Disney characters appropriately into each area represented in its “it’s a small world.” I think it improves the overall experience. There is also, arguably, no better attraction merchandise than Disneyland’s “I survived ‘it’s a small world’” t-shirts. 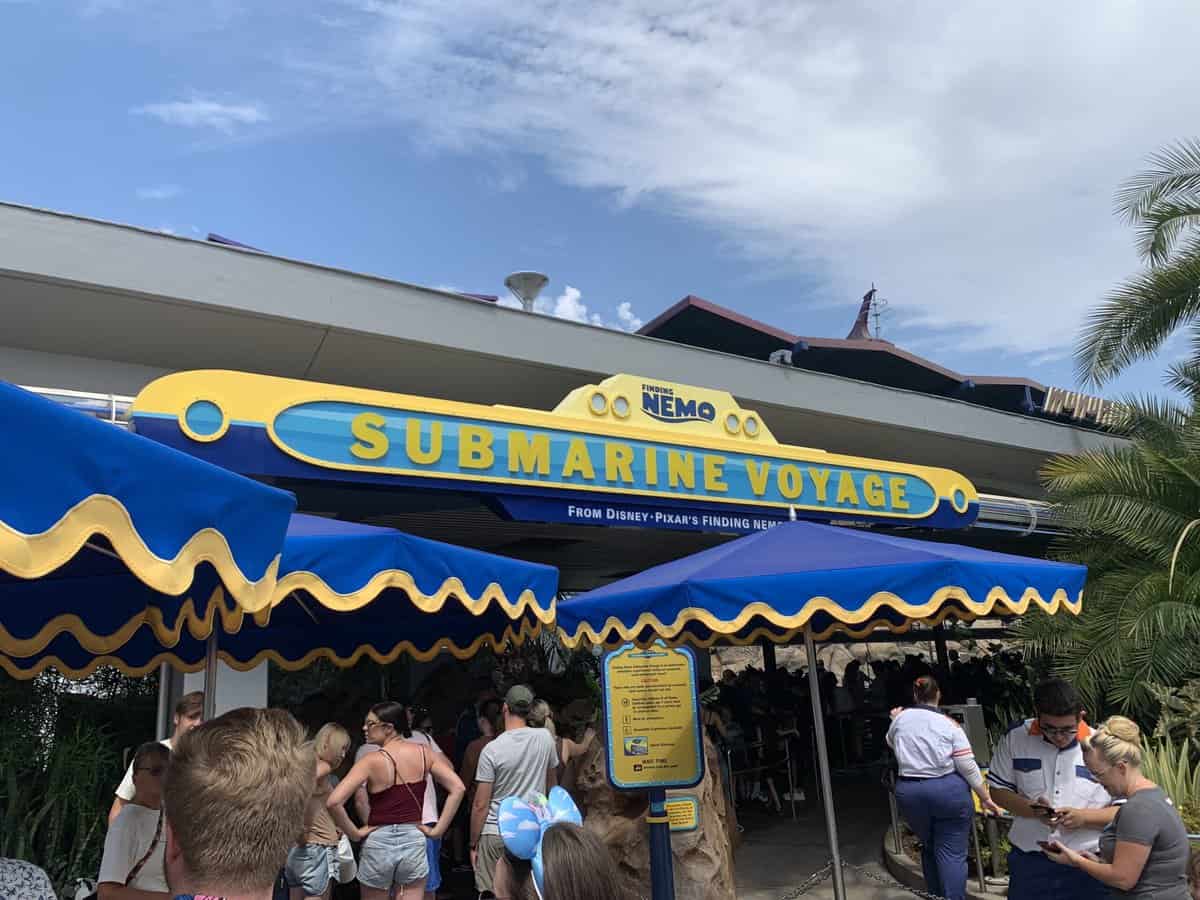 Both Disneyland and Walt Disney World feature a ride that takes Guests into the world of Pixar’s Finding Nemo, but Disneyland does it better.

You can find Disney World’s Nemo attraction in EPCOT as the rethemed entrance to The Seas with Nemo and Friends Pavilion. While it has a decent enough staging, the ride is a slow slide from screen to screen that projects our favorite characters seemingly into the pavilion’s massive tanks.

Disneyland’s, on the other hand, is manifested in a re-theme of the iconic Submarine Voyage. Yes, it is more cramped than the EPCOT variant, but this Tomorrowland attraction is far more adventurous and immersive, which gives a stronger feeling that you are really on an undersea adventure. I mean, you are actually below the waterline of the submarine, after all. The scenery throughout the voyage also appears to be of higher quality. It is also a great way to repurpose and preserve one of the most iconic attractions in Disneyland. 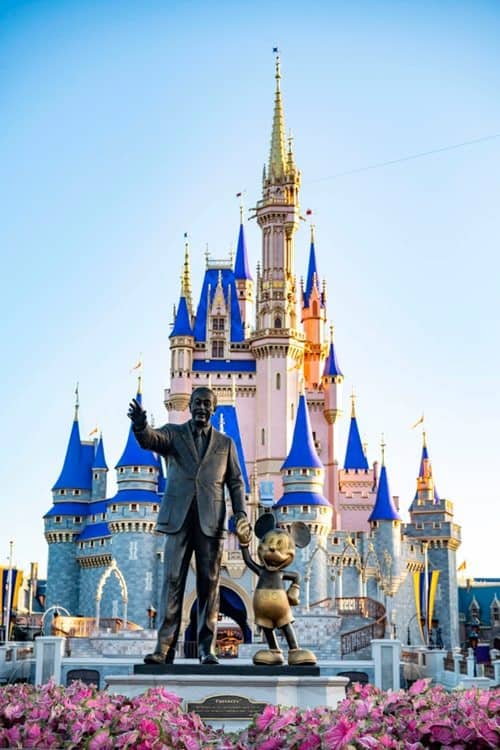 Sleeping Beauty Castle also does not come close to the majesty of Cinderella Castle.

But at the end of the day, I am so glad I found better variants at Disneyland Resort than I was used to at Walt Disney World Resort. It only means that I was able to have new magical experiences and that I have plenty of reasons to make the trip back to Anaheim in the near future.