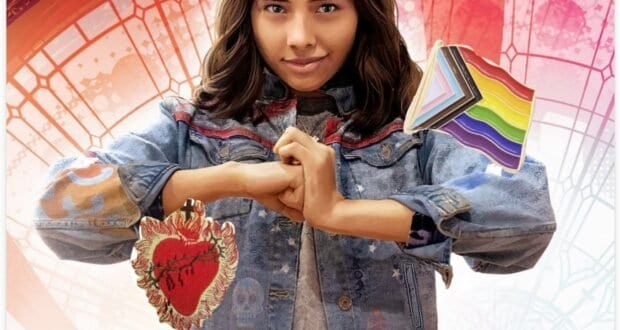 The latest edition to the Marvel Cinematic Universe Dr. Strange in the Multiverse of Madness hit theaters. The film marks the latest appearance of Dr. Stephen Strange as played by beloved British actor Benedict Cumberbatch. Dr. Strange was last seen in 2021’s Spiderman: No Way Home, which delved into the multiverse to bring all three actors who played have Peter Parker (Tobey Maguire, Andrew Garfield, and Tom Holland) together for the first time on the silver screen. No Way Home completed the Tom Holland Spiderman trilogy in the MCU, following Homecoming in 2017 and Far From Home in 2019. The film scored the second-biggest domestic opening of all-time with $260.1 million, coming in just after Avengers: Endgame at $357.1 million. Expertly bringing together the three Peter Parker’s and their respective cavalcade of villains for a fun and thrilling experience, the film also had a lot of heart and was a delight for fans to experience.

Multiverse of Madness seeks to delve further into the Multiverse while also; introducing new concepts involving the rules of inter-dimensional travel and magic in the MCU, completing a hero-to-villain story arc of a previously established character, and introducing a brand new all-powerful hero. Needless to say, that is a lot to take on in a single film. And unfortunately, the film’s conclusion raises more questions than it answers for the future of Marvel Studios‘ movies. Leaving the door to the Multiverse wide open to our surviving Avengers means that quite literally anything can happen. This has garnered mixed, though mostly positive, reviews from critics and fans. And the film is poised for financial success with the biggest theatrical opening of the year thus far, grossing $185 million at the domestic box office this weekend. But despite this, there was one small detail in Multiverse that took me out of the world that the film attempted to establish and immerse audiences in. In 1978, openly gay artist Gilbert Baker designed the very first rainbow flag as a symbol for the gay community. The idea was given to him by politician and gay rights activist Harvey Milk, as a flag was a concrete way for a community to show pride in their shared community and values. Taking inspiration from the rainbow as a “natural flag” in the sky, Baker designed the original 8 colored gay pride flag, with each color representing an aspect of being gay meant. Hot pink for sex, red for life, orange for healing, yellow for sunlight, green for nature, turquoise for art, indigo for harmony, and violet for spirit. As the artist himself stated:

Our job as gay people was to come out, to be visible, to live in the truth, as I say, to get out of the lie. A flag really fit that mission, because that’s a way of proclaiming your visibility or saying, “This is who I am!’”

The first versions of this rainbow flag were flown on June 25, 1978, for the annual San Francisco Gay Freedom Day parade. This would eventually become the more famous 6-striped rainbow flag that most people are familiar with today and associate with the gay rights movement. 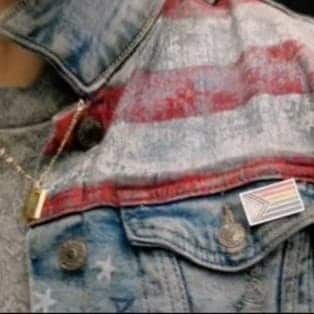 But when watching Dr. Strange Multiverse of Madness my eyes were drawn to the sight of the new pride pin on America Chavez’s signature stars and stripes jean jacket. This newer version of the gay pride flag was created in 2018 by designer Daniel Quasar. This variation of the rainbow pride flag incorporated additional colors to explicitly represent trans people and LGBTQ+ communities of color. This was represented by the integration of the transgender flag, as well as black and brown stripes to represent LGBTQ+ communities of color (especially those living with AIDS and the stigma surrounding it). The additional stripes were added in a chevron shape along the hoist to represent forward momentum. This version of the flag has been widely used by activists in the wake of the Black Lives Matter social movement and increasing trans visibility. 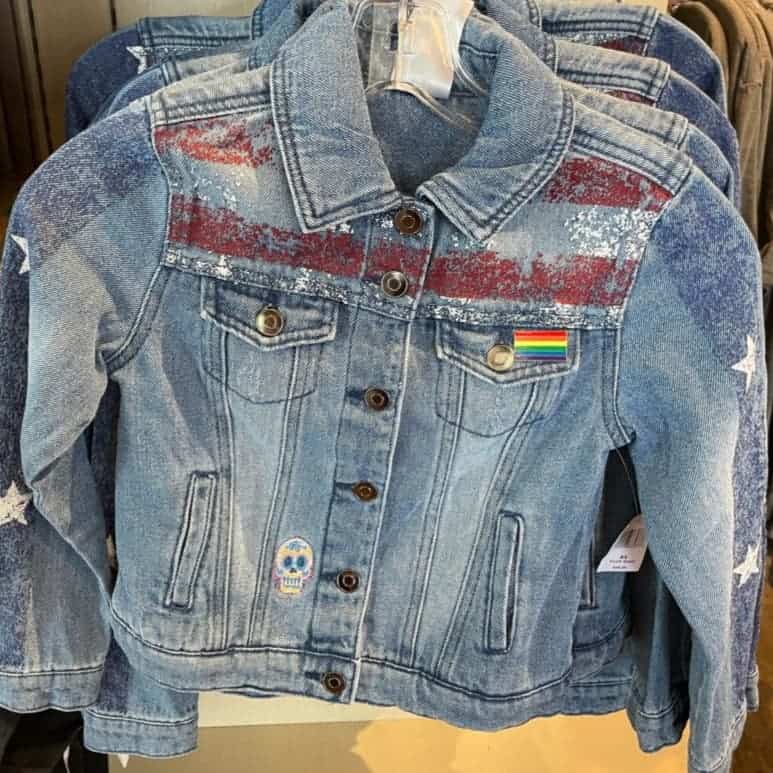 Dr. Strange Multiverse of Madness Merchandise available in stores ahead of the film’s release, which included America’s jacket with the traditional pride pin and no sacred heart or flames on the sleeves.

Ahead of the film’s release, the version of America’s jacket sold in stores and featured in promotional photos included a gay pride pin. This was not something that the version of America’s jacket had in the comic books, leading to fans speculating as to whether or not she would be introduced in the films as an LGBTQ+ character. Upon the film’s release, it was clear that the pin paid homage to her two mothers, a same-sex couple that raised her and whom she lost when she first opened an inter-dimensional portal as a young girl. However, the version of the flag in the film was not the more traditional 6-striped gay pride flag. 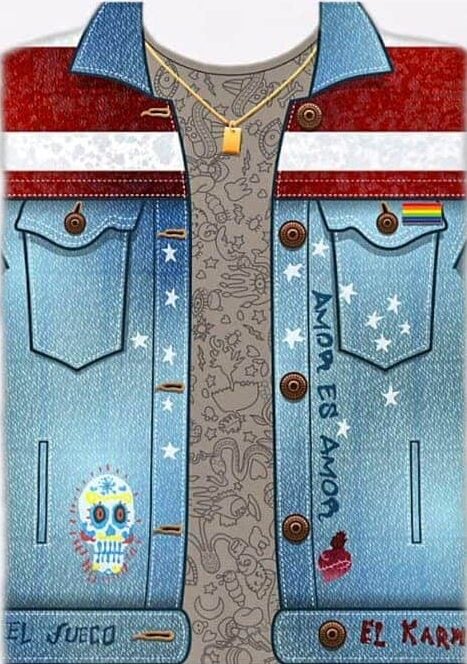 The pin seen in the film was the updated “inclusive” flag. Since Multiverse of Madness was filmed in 2020, it seems to make sense that they would want to show viewers that this character, who is a woman of color raised by a lesbian couple, would stand in solidarity with the causes the flag represents. But how did she get that specific pin? America states within the film she has been to over 70 universes, though this is a small blip in the infinite multiverse. We know that this is her first time in this specific universe and that other universes differ from the MCU greatly, as she states that most universes she has been to people don’t even pay for food and “it’s weird that you do.” So how exactly did she obtain a pin that’s designed reflects the specific social and political movements of one universe (the audience’s)? And this is not the only peculiar feature.

The Sacred Heart of Jesus 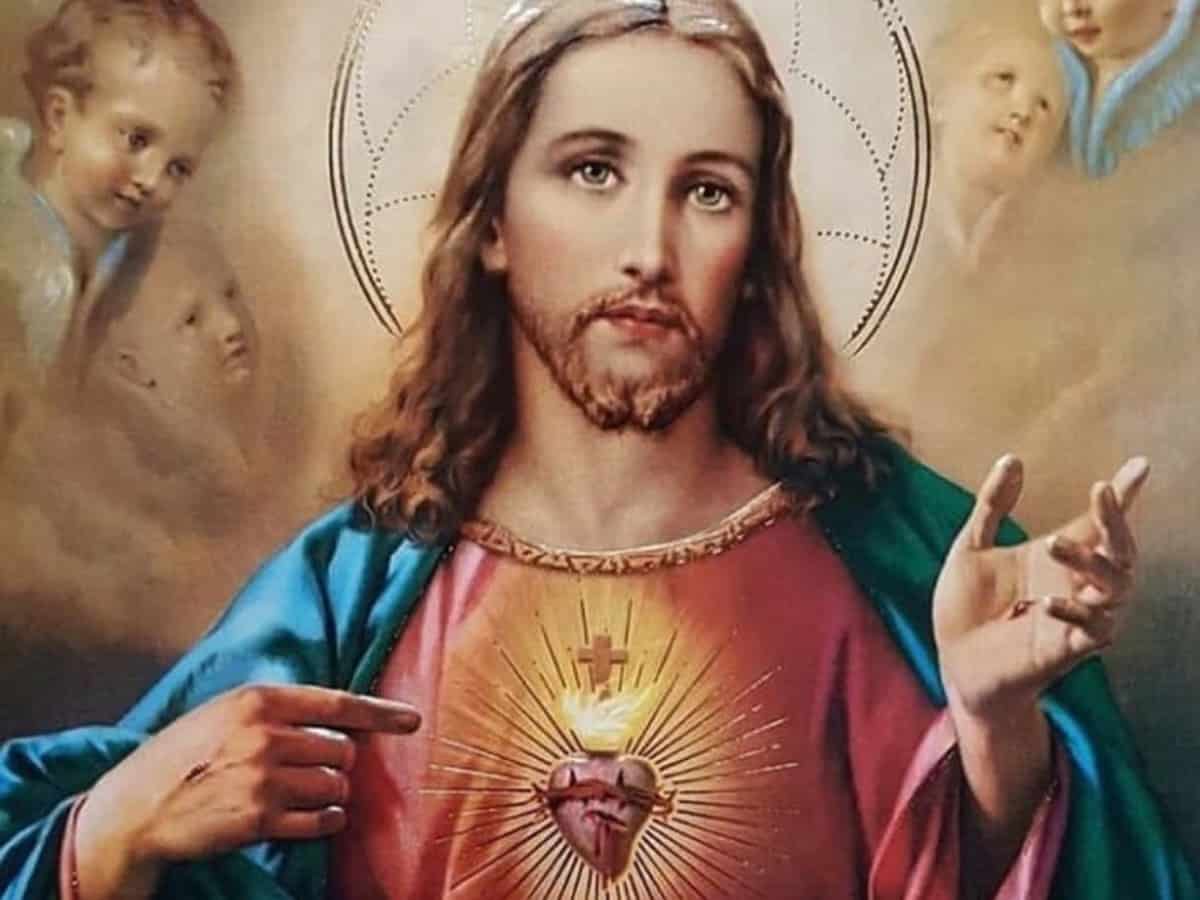 Traditional Roman Catholic Depiction of Jesus Christ, with the Sacred Heart of Jesus at his center.

Though it was not seen in the version of America’s jacket sold in stores, the version of America’s jacket in the film as well as the version worn by America in Disney Parks has the image of the Sacred Heart of Jesus on it. This is a symbol that is a tool for prayer in the Roman Catholic tradition used by Catholics to bring prayers and petitions to Jesus. This implies that America is from a society in which Catholicism exists and whose teachings America’s character has adopted or at least sought to honor in some way. She honors the Sacred Heart of Jesus in the same way in which she honors gay rights, by featuring it on the jacket that she wears always. But once again- when and where would she have encountered and adopted practices of the Catholic faith?

America Chavez as seen on the Avengers Campus in Disney’s California Adventure Park, with a jacket that includes the sacred heart of Jesus and the traditional gay pride pin.

Though it may seem like a small detail- the featuring of these two images ground America Chavez as a character in one specific universe- that is the universe of our own reality. And therefore it is seemingly less believable that the 14-year-old girl is a nomad who has spent her whole life going in and out of various realities. Given the sheer variety of the universes shown in the film, it seems unlikely that America would adopt the beliefs of a specific social movement or religion from one reality.

But what did you think of Multiverse of Madness?