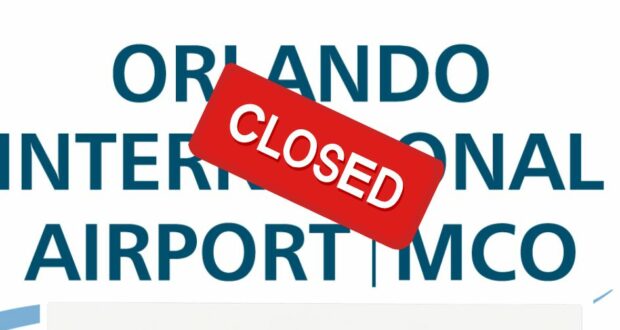 Hurricane Ian has been the main focus for many Florida residents and Walt Disney World Resort or Universal Orlando Resort Guests in the past few days as the tropical storm (which is, for now, still a Category 3 storm with 115 mph sustained winds) intensifies and growing closer to the Sunshine State. Apparently, the storm’s troubles have not passed the Orlando International Airport’s notice, either.

MCO to cease operations beginning 10:30am tomorrow due to #HurricaneIan. pic.twitter.com/Qb2Zx2nDRF

MCO is a big arrival hub for many Disney Guests who are arriving for their Disney vacations in Orlando, with as many as 2 million people being expected for holiday weekends like this one.

Pre-storm procedures were already being put in place, so this news will not be surprising for many Florida residents who have been tracking Hurricane Ian — but the fact that Orlando International Airport is shutting down (aside from emergency flights) is a clear sign of the storm’s expected severity.

The NHC has just issued their 11am advisory for #Ian; Here's a look… More of course today on WESH 2 News… pic.twitter.com/s3OLoHdEID

Disney Fanatic is continuing to keep a sharp eye on Hurricane Ian, as well, and we will keep our readers updated with the latest news on the hurricane. According to the National Hurricane Center, it will most likely become a Category 4 hurricane — and Walt Disney World Resort is already beginning to announce some closures in preparation for the storm, even though it has not yet closed the entire Resort.