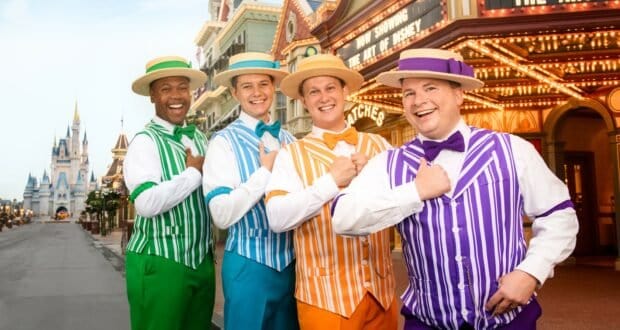 If you’ve ever perused the nostalgic, small-town streets of Main Street, U.S.A. at either Disneyland Resort in California or within Walt Disney World’s Magic Kingdom Park in Florida, then you’ve more than likely encountered those most dapper of Dapper Dans, performing in that classic barbershop quartet style they are so renowned for.

Aside from being a familiar featured staple in Disney Parks Entertainment, Disney’s Dapper Dans have a long and interesting history. From their humble beginnings to their nearly instant rise in fame, here are just six of several sensational facts we feel you ought to know about these dapper fellows.

Dapper Dans have been entertaining visitors in Disneyland since the late 1950s. It was in 1957 that Tommy Walker, entertainment director for Disneyland at the time, scrounged up a barbershop quartet gig to put on performances along Main Street, U.S.A. in hopes of further instilling the turn-of-the-century motif they were going for.

Originally intended to be short-term skit performers under a three-month contract, the dapper fellows were so well-liked and popular that constant contract renewals soon followed, eventually establishing them as permanent fixtures in Disney Entertainment. By 1959 Disney’s Dapper Dans were doing more than just singing; they were also performing in full vaudeville style with all the works and comedy antics.

When Walt Disney World Resort first opened back in 1971, the Magic Kingdom Park got its very own group of Dapper Dan musical performers. Likewise, Dapper Dan-based entertainment has also been incorporated at other Disney Parks in locations across the world. These, however, were on a more temporal basis.

For instance, Hong Kong Disneyland Resort welcomed its own Dapper Dan group during the years 2005 to 2008. Before then, throughout the years 1992 through 1995, Disneyland Paris also featured Dapper Dan-inspired performers. Their group, however, was known as “The Main Street Quartet.” Currently only Disneyland Park in Anaheim, California and Walt Disney World Resort in Orlando, Florida feature permanent Dapper Dan entertainment performances as part of their daily entertainment staples.

It goes without saying that whenever Dapper Dans are out and about, you will see just four fellows performing at regular intervals. But the actual number of hired members at a given time is really 12. That’s because Dapper Dans are called on seven days a week to put in multiple performances at varying times throughout the day.

This would indeed be an overwhelming feat for just four members to take on, so naturally, Disney applies a rotational workaround to give these dapper gents adequate time to rest up.

As we just mentioned previously, Dapper Dans put on a lot of performances — nine sets a day, every day to be exact. And you are guaranteed to find them at their game around the clock. For the folks who are out and about Magic Kingdom Park during the morning hours, you can seek them occupying their home base on Main Street, U.S.A. riding along in a horse-drawn trolley (in most instances).

They’re also known to walk about, performing more as a roving quartet on foot all around Main Street, U.S.A., throughout most of the afternoon. They’ve even likely to pop into Harmony Barber Shop (when it is open) in order to serenade lucky Guests who just happen to be getting their hair cut at the moment—delivering on a true barbershop quartet experience.

Disneyland’s Dapper Dans like to hang around the famous Fire Dept. Building on Main Street, U.S.A. but can also be seen frequently riding along on their one-of-a-kind bicycle built for four. Dapper Dans at both Parks also take part in the daily Flag Retreat Ceremonies as well.

In keeping with a truly traditional nod to nostalgia, Disney’s Dapper Dans incorporate actual Deagan Organ Chimes in all of their acts. Created by the Chicago-based J.C. Deagan Company back in 1901, these chimes produce music when shaken. There are eight chimes in all, and each has three octaves of a single note making up the C scale.

Deagan Organ Chimes have seldom been in use since the 1920s. But when they were featured more regularly, they were most often incorporated into vaudeville acts. So, it makes perfect sense why Disney’s Dapper Dans would have them — another way Disney delivers on detailed authenticity.

Every year, during scheduled Halloween happenings at Disney Parks, the usually smartly dressed Dapper Dans undergo zombie-like transformations to become the notoriously gruesome Cadaver Dans. In keeping with the dismal theme, the Cadaver Dans really shake things up enough to wake the dead with their renditions of classic chilling melodies taken from some of Disney’s darker delights, including the iconic “Grim Grinning Ghosts” song as featured in Disney’s Haunted Mansion attraction.

Likewise, at Christmastime, they also incorporate beloved familiar holiday classics into their performances. During Independence Day celebrations they also go all out in sporting spiffy clothes reflective of the American Flag.

Because the Dapper Dans have been around for so long, we’ve seen many come and go through the years. And counted among them, several have even been or are currently members of the Barbershop Harmony Society.

Whether you visit Disneyland Park or Magic Kingdom Park at Walt Disney World Resort, Disney’s Dapper Dans truly are the most dapper fellows to have around. They’re always there to lighten the mood, brighten the day, and bring a lasting smile to your face.