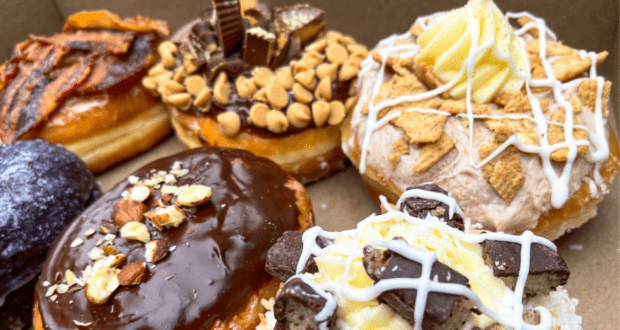 Foodies know well that Walt Disney World is host to so many possibilities for indulging in sweet treats and savory snacks of all kinds. Basically, any contested creature comfort you can think of can be found here, so it goes without saying that for the ultimate doughnut lover, Disney delivers impeccably in all standards across the board. From quality and freshness to overall uniqueness in flavors, toppings, and house specialty concoctions, it’s nearly impossible to resist sinking your teeth into all the doughy goodness of such crave-worthy confections.

Related: Eight Exceptional Places at Walt Disney World Where You Can Seek Out Specialty Doughnuts

What’s more, doughnuts are available at so many locations all throughout Walt Disney World Resort and in nearby Disney Springs that to seek them out is fairly easy. But we’re making the process even easier with this ultimate doughnut lover’s guide to Disney World to have on hand, detailing all the specifics for where to go and what you can hope to find there.

Friar’s Nook—If you’re headed to Magic Kingdom Park and you find yourself hankering for something small and sweet, consider some tantalizing petite treats that never fail to hit the spot. We’re of course talking about doughnut holes, and not just any doughnut holes, but those of the cinnamon-sugar variety. Friar’s Nook over in Fantasyland proudly boasts such offerings via their rightly named Cinnamon-Sugar Doughnuts, which are listed on their breakfast menu daily.

Westward Ho—Another place where you can find cinnamon-sugar donut holes at Magic Kingdom Park is at the quick-service location Westward Ho within Frontierland. Offered on the menu as their Powdered Cinnamon-Sugar Donut Holes, they too are a permanent fixture offered up daily during the breakfast time hours.

Not too far from the Magic Kingdom, you’ll find this upscale dinner destination at Disney’s Contemporary Resort. And surprisingly enough, they too feature those “doughnuty” goods as one of their dessert options. The variation, in this case, is their lavish Lavender Sugar Doughnuts. An entirely plant-based offering, these decadent delights come paired with a delicious coconut-based frozen yogurt (faux-yo), blueberry gin jam, and pistachio crumble.

Primavera Kitchen—The EPCOT International Flower & Garden Festival is now in full swing, and that means there are various outdoor kitchen setups all throughout the different World Showcase Pavilions. And for those looking to dive into a most unique international offering of the contested doughnut may do so over at the Italy Pavilion’s Primavera Kitchen. It comes as their classic Bomboloni—a powdered-sugar covered cream-filled confection with raspberry sauce.

Sci-Fi Dine-In Theater Restaurant—As one of their featured allergy-friendly dessert offerings, this science fiction-themed family favorite too offers up those glorious goods. While the menu lists it simply as the Warm Glazed Allergy-Friendly Doughnut, there’s nothing simple about this doughnut presentation, as it comes decked out with cinnamon apple and a crown of frozen vanilla soy milk.

Related: 10 Reasons Why Disney’s Sci-Fi Dine- In Restaurant Is A Fan Favorite

Eight Spoon Café—For an exotic, somewhat controversial doughnut combination you can get in Disney’s Animal Kingdom Park, head for this kiosk over at Discovery Island. The questionable doughnut here takes the form of a sandwich—the Pulled Pork – Jelly Doughnut Sandwich to be exact. What it contains is pretty self-explanatory—a pulled pork-stuffed jelly doughnut with slaw.

Joffrey’s Mini Donuts—As the official coffee of Disney fame, it stands to reason that there are a number of different Joffrey’s kiosks all throughout Walt Disney World Resort. In the past, some locations used to offer up Joffrey’s massive donuts by Donut King. But now these goods come in smaller sizes, which means you can have even more per their abundant variety packs. With so many different assorted toppings and flavors, these cute little confections truly set the stage in culinary creativity. Featured donut variations by Joffrey’s include just some of the following options:

As Blizzard Beach Water Park remains closed for the time being—so does their popular Joffrey’s Mini Donuts setup. However, fans of Joffrey’s Mini Donuts can still satisfy their taste for these versatile little morsels over at Typhoon Lagoon Water Park’s own kiosk location of the same name. Select 6 to 12-count variety packs of all your favorites with an accompanying dipping sauce(s) of choice. Current offerings for the latter include traditional chocolate, white chocolate, or raspberry.

Related: The 8 Things We Love About Typhoon Lagoon

It is perhaps neighboring Disney Springs that offers up the most doughnut-derived destinations per capita. This makes it the ultimate go-to for having a Disney World doughnut crawl. From favored features at well-known restaurant venues to bakeries that specialize in the contested confections, here’s where to go and what you can hope to find in the way of doughnuts at Disney Springs:

Chef Art Smith’s Homecomin’—A favored dining spot with a reputation for flavorful food favorites, House-made Doughnuts have always been a staple on the menu at Chef Art Smith’s Homecomin’. In their most basic format, they are offered in simplistic epicurean goodness as freshly made sugar doughnuts. But various menu offerings utilize the aforementioned via a number of house novelties as well. In fact, one of their famed entrée favorites is the Fried Chicken & Doughnuts plate—a flavorful feature that blends together two of the restaurant’s classics.

And for their weekend brunches, they even offer up a decadent doughnut starter, comprised of those famed morsels plied with pecans and bacon. Diners can choose to top it all off with either a caramel drizzle or a dusting with sugar. Garnishing the overall presentation is spiced cane syrup and a seasonal fruit pairing.

Erin McKenna’s Bakery NYC—This noted bakery is hailed as the ultimate go-to for savory allergen-free, plant-based, kosher-certified baked goods. With the impressive know-how for creating tantalizing treats that never sacrifice taste or flavor, Erin McKenna’s is a favorite even for those who do not necessarily have dietary restrictions per se.

And among their profuse offerings is of course a versatile array of different doughnut options. Some flavors change daily or seasonally, but many of their most ovation-worthy fixtures are offered regularly and include their Vanilla Sprinkle Samoa, Salted Caramel, Powdered Blueberry, and Chocolate Dip.

Everglazed Donuts & Cold Brew—Hands-down, this is the absolute epitome of what a doughnut utopia should be. Here they deliver on all the works with an enticing array of versatile makings, flavors, and toppings. With new, novel concoctions forever emerging it would be nearly impossible to highlight each and every option on the menu here. But here are just some of their hottest items to date:

We hope this comprehensive guide has given you some much-needed direction in navigating the many notable doughnut designations throughout Walt Disney World Resort. And as is always the case anytime you consider the Disney food scene, menus and items are always subject to change. But in the case of doughnuts, the changes are almost always in the form of improvements that bring in even more quality and abundance to boot.

Additionally, there are always new doughnut concoctions shifting throughout the Disney World scene, including unique fusion varieties like cronuts (combinations of croissants and doughnuts) as well as donut-ice cream compilations like those at the new Salt & Straw location at Disney Springs.

Doughnuts are good enough on their own, but they taste even better when plied heavily with Disney magic.