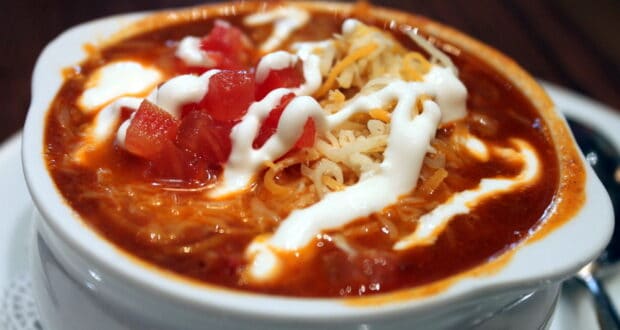 The first week of October is a time when many folks across the country celebrate National Chili Week. Even with most chili cook-offs and other contests now over or ending, the reality is that you really don’t need to turn to a specific time of year to enjoy a great big bowl of that hearty classic. Even though it comes in a profuse range of variations (some of which can be vastly different from the next), chili remains a fan favorite tradition that many people just can’t get enough of! Walt Disney himself could attest to this, as he had an undeniable fondness for the noted mainstay concoction and even sported his very own family recipe, which has appeared in the Walt Disney archives time and again (sometimes with slight variations).

Disneyland’s famed Carnation Café has long been hailed as the designated Disney destination where guests can indulge in Walt’s Chili, crafted from his original recipe. But with the start of all the 50th Anniversary Celebrations taking place at Walt Disney World, many park and resort venues are adding this fabled staple to their menus as well. So this, coupled with the fact that there are already plenty of great venues at Disney World already known for offering chili on their menus regularly, allows for diehard chili fans to undergo their very own Disney World chili crawls. Need some ideas about where to stop in at? Here are some suggestions.

We mentioned Walt’s own classic chili recipe, which has been around since at least 1958 with some minor tweaks and variations throughout the years. All the same, it remains pretty exclusive in what it entails, with its delivery of pinto beans, beef, tomatoes, peppers, various spices, garnishments, and overall methodology in the whole making process. And now you get to taste it yourself at these various park and resort hotel locations:

This long-time eatery located right in the heart of Main Street, U.S.A. is a Magic Kingdom Park classic, renowned most notably for their hot dogs and other baseball-like fan favorites. And it’s the perfect stop to take if you’re looking to try some of Walt’s Chili. Order a side of the authentic chili to enjoy as is, or try it served up as part of the featured Walt’s Chili-Cheese All-Beef Hot Dog special (also available in foot-long). You can also order Chili-Cheese French Fries as a filling snack or side accompaniment. 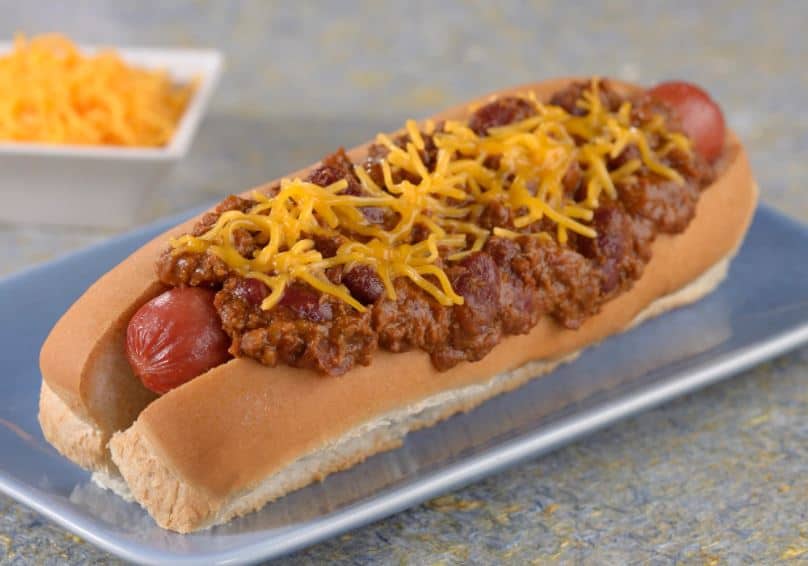 This highly regarded quick service stop, located within Magic Kingdom Park’s Tomorrowland, is a convenient go-to for park visitors looking for all the great American classics. It’s also one of the stopping points currently dishing out Walt’s Chili. Order it as Walt’s Chili-Cheese All-Beef-Foot-Long Hot Dog or as the praise-worthy side Walt’s Chili-Cheese Fries. Take note, this location also offers the aforementioned fries as part as their featured 1971 Meal special.

This awesome snack stand, also on location at Tomorrowland, is an excellent stop to grab light bites and quick pick accompaniments. It also happens to be one of the select other places offering up the Walt’s Chili-Cheese All-Beef Foot-Long Hot Dog we’ve already highlighted two other times.

Over at Disney World’s “coolest” waterpark, Blizzard Beach, you’ll find this satisfying snack stop has plenty to offer by way of big tastes. And now when you come here you can chill with some chili—Walt’s Chili, to be exact, served up as the Loaded Nachos with Walt’s Chili feature. There’s also a Chili-Cheese-Corn Chip ¼-lb Hot Dog on the menu as well.

Located over in Animal Kingdom Park’s DinoLand U.S.A. you’ll find this other quick service food stand favorite. And it’s here that Walt’s Chili is being doled out dual ways. First there’s the featured menu pick Corn Chip Pie with Walt’s Chili, and then there’s Walt’s Chili on a Cheese Dog—served as a traditional hot dog and bun, with that crave-worthy chili and cheddar cheese sauce.

Also on location at DinoLand U.S.A. is this well-loved quick service hub with plenty of family-friendly featured favorites. In keeping with Walt’s Chili specialties here you’ve got two options—Cheese Fries with Walt’s Chili and that new classic in the making you’ve already heard so much about—Walt’s Chili on a Foot-Long Cheese Dog. 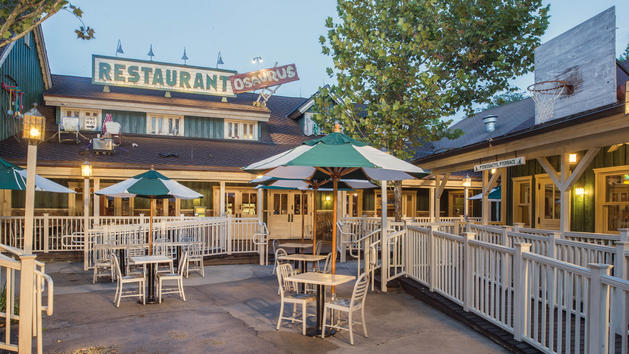 Walt’s Chili is currently being offered at various hotel locations throughout Walt Disney World Resort by way of the special Walt Disney’s Favorite Chili in a Bread Boule special entrée meal. Each food court’s presentation comes as that honored classic chili recipe served up in a bread boule with cheddar cheese. Enjoy some today at one of these four locations:

Related: Staying at a Disney Value Resort? Here is Where You NEED to Eat!

Over at this resident eatery at Disney’s Polynesian Village Resort they do Walt’s Chili bowl a little differently. Here they ply eager eaters with their specialty Walt’s Favorite 1958 Chili item. For this presentation, the hearty helping of that delectable dish comes in a decked out presentation of shredded cheese and crackers.

Aside from chili specialties that are specific to Walt’s classic recipe, plenty of Disney World venues have a long history of cooking up that comfort food we’re so obsessed with. Here are just a few places to keep in mind:

In celebration of Walt Disney World’s 50th Anniversary, this Animal Kingdom-based lounge is presenting their rightly named 50th Celebration Chili Dog, which comes as a grilled sausage on a bun, laden with their own specialty venison chili, and served with pickles.

Chili has been a classic staple at this beloved Magic Kingdom dining designation for a while. Their house specialty is a plant-based pinto bean chili, served with cashew cream and lime wedge. Another all-vegetarian chili presentation offered here comes as the Chili-Impossible Burger—a classic Impossible Burger (plant-based), topped with chili, mushroom, lettuce, and tomato.

You’ll find plenty of chili varieties onsite at this hungry haunt over at Disney’s Beach Club Resort. Not only do they offer their traditional Chili feature, but they also present their very own plant-based version as well. Then there’s their All-Beef Chili-Cheese Hot Dog, Beef Chili-Topped Baked Macaroni & Cheese, and a plant-based variation of the latter as well.

At this other family favorite establishment also at Disney’s Beach Club Resort, you can order a classic Bowl of Chili topped with cheese and green onions if you so choose. Or perhaps you’d like the Chili and Cheese Tots feature available in traditional as well as plant-based variations.

If you take a detour into Disney Springs you’ll find that famed Disney-based location for Planet Hollywood you’ve no doubt heard of. And it’s here you can feed your craving for those favored Nachos Grande appetizers, which come to you as corn tortillas loaded up with mounds of chili, four different cheese sauce varieties, olives, jalapeños, guacamole, pico de gallo, and sour cream.

This famed dining and drinking establishment, also at home in Disney Springs, gets plenty of praise for a number of reasons. And for those favoring chili, you just can’t beat their signature 1871 Chili specialty, compiled of Angus steak, pork, milk stout, chipotle peppers, red onions, sour cream, and a cornbread muffin to accompany it all. 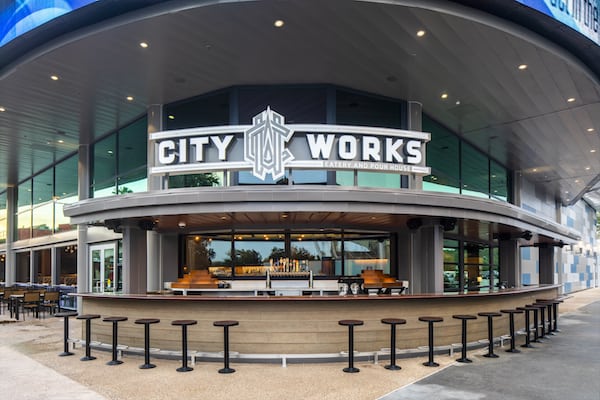 We’re sticking around Disney Springs a bit longer for our chili crawl with stop in at this stylish restaurant known for celebrating the dynamic, distinguishing flavors that make of the American continents. When craving chili here, just be sure to order the Border Nachos appetizer for two, dished out as a mix of chili con carne, with cheese, cheese sauce, shredded lettuce, pico de gallo, and jalapeños, all packed into corn tortillas.

While not a restaurant, this famed favorite on-location at the Disney Springs food truck scene is a doggone good one. And it’s here you can get their highly hailed Texas Chili Cheese hot dog feature. They also ladle out that tantalizing mixture when serving up their Texas Chili Macaroni & Cheese specialty as well.

Related: Here’s What We Love About Disney Springs Food Trucks

To be “frank,” this is another great Disney Springs pick for wieners of all sorts. It also happens to be the place where you can gorge on a house specialty variation on the classic Texas Chili-Cheese Dog (also in a foot-long variety). Hungry folk take heed, this delectable dog also comes served as part of the Three Little Pigs exclusive entrée offering, which is comprised of three mini specialty dogs, (Pastrami Rueben, Hawaiian Island, and Texas-Chili Cheese) and served with chips.

At Hollywood Studios you’ll find this playful quick service hub, appropriately enough, located in Toy Story Land. And it’s here where you can order a unique “Totchos” specialty, which comes as potato barrels, coated in beef and bean chili, shredded cheese, queso with tomatoes, and corn chips with sour cream and green onions. A plant-based version of this is also available, substituting the beef chili and cheese for plant-based, dairy-free alternatives.

Here is another Hollywood Studios mainstay of quick service fame. Offering their own house chili, you can order the good stuff on its own or served up in conjunction with their specialty Chili-Cheese All-Beef Foot-Long Hot Dog.

If you’re in the category for being a self-proclaimed chili-obsessed Disney fanatic, then you’re probably hankering for a hearty helping of that honored stuff right about now. And While we’ve highlighted plenty of places for where to find this contested comfort throughout Walt Disney World Resort, do keep in mind that the Disney dining scene is forever changing, so it’s always preferred that you keep current on all the latest menu offerings being put out at any venue. Also, given the fact that 50th Anniversary Celebrations will be sticking around for quite a while now, the incorporation of additional novelties and specialty menu features is not only possible but is to be expected. Whether it’s chili or something else, the conclusion is always the same; Disney is forever making meals more magical through their vast medley of menus.