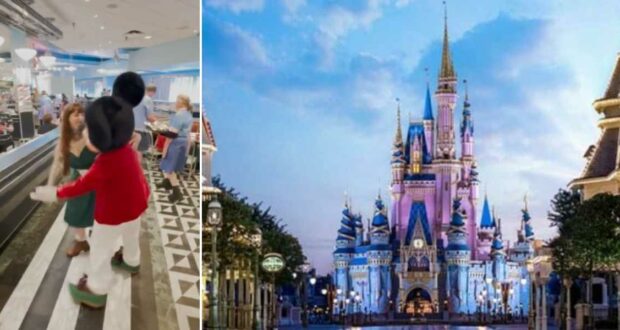 In one of the cutest videos we’ve seen all day, a fan shared a special moment she had with Mickey Mouse at Walt Disney World Resort.

One of the main draws of the Walt Disney World Resort is the wonderful character experiences on offer for Guests. People get to meet their favorite heroes, princesses, and characters as they immerse themselves in the World of Disney while at a Disney Theme Park. Since the Disney Park reopened after the pandemic, they have slowly started bringing back many beloved offerings, including more character interaction (whether through character dining or otherwise).

Disney Guest and Reddit user u/illusionarystardust shared this wholesome experience where Mickey Mouse danced with her:

Mickey asked me to dance at Hollywood & Vine! from WaltDisneyWorld

Fans were thrilled with the video, and some, in particular, humorously commented they were impressed with Mickey’s dancing skills. U/Euchre said, “That’s impressive! Mickey never stepped on your feet once or smacked you in the face with an ear or the nose. It’s one thing to dance without that getup, but to do so that well in that? Wow!”

U/Dingleboone questioned whether Mickey picked the Guest at random or if she got ahold of a Cast Member. They continued, “You are such a phenomenal dancer, if he picked you at random I bet he was flabbergasted!”

Commenters were lovely, and all enjoyed this incredible moment that the OP shared with the most beloved Disney character.

This said, Disney characters have been embroiled in controversy lately, for some viral videos of a Minnie Mouse treating a little girl coldly, and Minnie Mouse yet again, “breaking a fan’s heart” and “ruining the experience” for them. Disney has also been getting flack for its rising prices, which, despite Bob Iger’s return, continue to only go up, leaving many Disney fans in debt from their Disney vacation.

Related: Almost 20% of Guests Go Into Debt Because of Disney Prices

With all this in the news, it’s wonderful to see this interaction between Mickey and the Disney Guest.