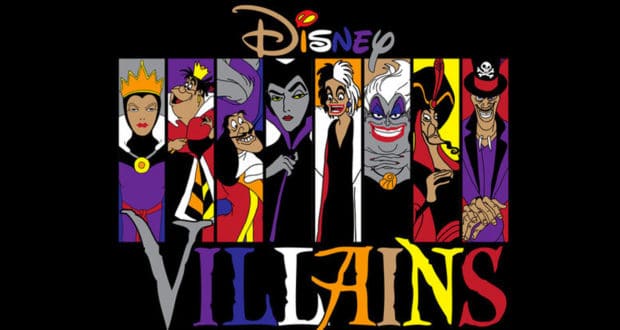 Let’s be honest; there are some pretty popular Disney villains you probably don’t hate the way you should. Dare we admit that some villains are even likable, in their own contemptuous ways? Or maybe it’s just the fact that we love hating them so much that makes us so enamored by them. Whatever the reason, we’re putting together this survey of some of Disney’s all-time favorite villains we just love to hate.

Related: 9 Most Notorious Disney Villains – The Bad Guys And Gals We Love To Hate!

As Disney’s first truly evil character to be featured in a full-length animated motion picture, this vain villain first emerged on the scene back in 1937, making her debut in Snow White and the Seven Dwarfs. Driven by jealousy for the title character, the Evil Queen’s murderous motives rest in her heinous attempts to retain her claim to fame for being the fairest of them all (which she clearly doesn’t have). You just can’t get much meaner than that.

Related: Are You More Maleficent Or The Evil Queen?

This desert-dwelling baddie made our acquaintance back in 1992 with Disney’s animated adaptation of Aladdin. Serving as Royal Vizier of Agrabah, his profession would denote that he has the Sultan’s best interests at heart. But this is not the case, as we quickly find out. Power is the primary motivator that drives him. His objective—to become the most powerful being of all. And he goes to great lengths at achieving his goal, regardless of whom he has to hurt along the way.

It goes without saying that this ruler of the underworld would make it onto our list of top villains, despite the admittedly less popular reception of Disney’s animated Hercules film from 1997. But anyone who is familiar with Greek mythology knows the role of Hades, all the same. And Disney does well in driving home the likened traditional depiction of the hot-headed, hate-filled Hades. Although, seeing as this is a film for children, some of the wickedness Hades displays is curbed into a more sugarcoated format. As a result, some of what we see in his presentation is more parodied and ridiculous.

This is one formidable feline, as anyone who has ever seen any version of Disney’s The Jungle Book can attest to. Stalking onto the screen in both the original 1967 animated adaptation and its 2016 live-action remake, this Bengal Tiger makes no subtle attempts at hiding his animosity for the film’s primary protagonist as well as the jungle’s other inhabitants.

Here’s another bad kitty serving to fill the role as head antagonist in two adaptations of the same Disney film. As the brother of the king lion in Disney’s The Lion King, Scar could be easily pitied for his plight of never getting to assume the throne as ruler of the Pride Lands, especially when his nephew is born into the royal claim of inheriting such a legacy. But we just cannot feel bad for a vindictive murderer who stops at nothing to eliminate those who are far kinder-hearted and just for the sole reason that they happen to stand in the way between him and his ultimate goal.

Related: Why Doesn’t The Lion King Have a Bigger Presence at Disney Parks?

Here you literally have the Boogeyman, as depicted in Tim Burton’s cult classic stop-animation hit from 1993-A Nightmare Before Christmas. Presented as a bug-filled burlap sack, he is a most odious presence in Halloween Town, even by the normalized disgusting standards of the town’s other many gruesome inhabitants.

This cold-hearted lady makes no attempts at hiding her complete and utter disregard for her stepdaughter—the title protagonist in Disney’s Cinderella. However, she has no problem building up her “real daughters” in hopes of prepping them for far better circumstances. While the 2015 live-action version does offer a bit more insight and explanation into the nature of her character as opposed to the original 1950 animated version, her maltreatment of our heroine is unpardonable just the same.

Alternately known as the Shadow Man, this voodoo villain of Disney’s The Princess and the Frog makes no secret to his having friends on the other side, accounting for the dark powers he possesses. He is the one responsible for setting into action the entire thematic chain reaction of messes the film deals with by transforming Prince Naveen into the noted frog the movie’s title refers to.

Here’s a raging royal notorious for taking over the limelight (in her case red light) in all of Disney’s Alice in Wonderland installments. While different versions offer different takes on the Queen and her demanding nature, certain underlying character traits always end up surfacing, like the fact that she is a hot-tempered tyrant obsessed with decapitations. Does that sound like someone who is nice?

This may just be one of Disney’s most favored figures to detest. As first presented to us in the animated classic Peter Pan from 1953, Captain Hook is an abhorrent pirate living on the seas in Never Land. Caught in a continuous feud with the story’s eternally youthful protagonist, there’s no question that the many wicked wiles of Captain Hook are all key factors that drive home such an extensive fan base.

Slimy, shifty, and grotesque are all excellent adjectives to use when describing this repulsive riparian horror. As introduced to us in the 1989 Walt Disney animated film adaptation of The Little Mermaid, Ursula is, by all accounts, a verifiable sea witch with ugly purple skin and octopus-like tentacles. Aside from her outer-appearance, her inner nature is even more deplorable, as she uses her cunning for striking unfair deals with “poor unfortunate souls” throughout the seas.

Related: What Would Ursula Want From You?

This arrogant hunter, looking to woo the main female protagonist in Disney’s Beauty and the Beast makes no secret about the fact that he is a narcissist with far too large of an ego. But that’s not the extent to his villainous nature, as proven through his hideous, manipulative acts of selfishness all for the greater quest of getting anything that he wants and at all costs. It is he who proves to be the true beast in both film adaptations.

Disney’s 1996 animated release of The Hunchback of Notre Dame doesn’t always get all the credit it deserves. This is especially true if you’re rating villains, as this film boasts one of the most evil, detested antagonists ever to darken a Disney film. We’re talking about none other than Claude Frollo. Despite his supposed vocation for serving in ministerial duties within Notre Dame Cathedral, he’s as wicked as they come, doling out his corrupted sense of justice to those he perceives to be sinners or other deviations from what would suffice in suitable society.

Treating your fellow man with deep-rooted hatred and contempt is unquestionably mean, but to strike out against puppies and other innocent animals is absolute cruelty. So it goes without saying that this villainess of Disney’s 101 Dalmatians was rightly named. Her animosity-filled antics and desire for killing creatures for the sake of the latest fashions are notorious among Disney’s most detested villains. And while the recent live-action release of Cruella did attempt to shed more light into her backstory, as a way of explaining how she became the way she is, there’s still no justification for such cruel devilishness.

This malicious mogul is one the most enigmatic Disney characters of all time. First appearing in Disney’s 1959 animated classic Sleeping Beauty, Maleficent is presented as a dark fairy—the manifestation of pure evilness. It is she who is responsible for the primary protagonist’s titular fate. With the live-action release of Maleficent in 2014 and its sequel Maleficent: Mistress of Darkness in 2019, we get to learn more about the dynamics of her character and reasoning behind what sparked the essence of evil she so incarnates. Despite her reputation as one of the most sinister of all Disney villains, she is also, by far, one of the most popular ones as well.

Related: Here’s Exactly How to Be Disney’s Maleficent For Halloween

Disney villains are never in short supply, especially as more and more movies come out. In fact, we could go on naming many more in addition to those we have mentioned here. Consider this a starter list of only the most contested Disney villains. And keep on reading as we reveal many other wicked and crafty characters who don’t always get the recognition they deserve in Part Two.