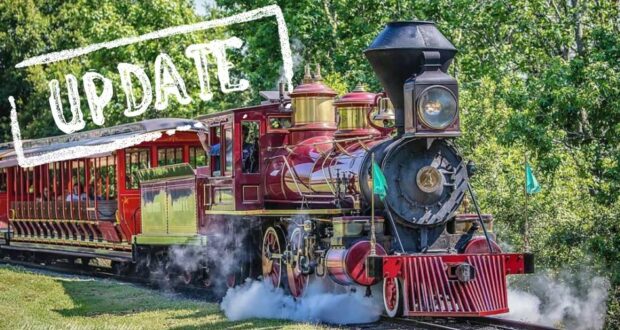 A Walt Disney World Railroad Update We’ve Been Waiting For

Do you remember what happened on December 3, 2018? We do! The iconic Walt Disney World Railroad at Magic Kingdom Park closed on December 3 to make way for the construction of the new TRON coaster. Now, well over 1,350 days later, it looks like progress is being made to reopen the greatly missed attraction.

And while the Walt Disney Railroad needed to be closed to be routed through the new TRON coaster, it’s been a long wait to board the steam engine trains for that memorable 1.5 scenic route around the Disney Park.

But, FINALLY, we’re seeing the update that could mean the engines will be up and running soon!

@bioreconstruct took to social media to share a photo update on August 13, 2022, noting, “Zoom in to see that bolts are ready the secure track through the steam train tunnel under Tron. Top left is a view of the guest walkway for Storybook Circus access.” Check out the image in the tweet below:

That’s right – that’s the tunnel the Walt Disney World Railroad will take through TRON to continue along with its 20-minute journey around the Park. It’s been over 1350 days, but the train finally has a way to pass through the coaster!

While Disney has teased the reopening of the train ride is coming soon, they have yet to release a reopening date. We are excited about this progress and believe the tunnel completion could be the final stages, or at least finally heading in the right direction for reopening.

RELATED: Could Disney World Railroad get its own ‘Primeval World” Segment for Reopening?

All Aboard! Listen to the clamor of the engine, the chug of the wheels and the call of the whistle as you travel aboard the Walt Disney World Railroad. Take your seat on 1 of 4 meticulously restored, vintage narrow-gauge steam trains—originally built between 1916 and 1928—and enjoy a relaxing 20-minute, 1.5-mile scenic round-trip tour. It’s a convenient—and nostalgic—way to get around Magic Kingdom park!

Find a Train Station: You can board or disembark at any of 3 stations:

We’ll be sure to share updates with our Disney Fanatic readers as we learn more theme park updates about the Walt Disney World Railroad and TRON Lightcycle Run’s progress in the coming months.