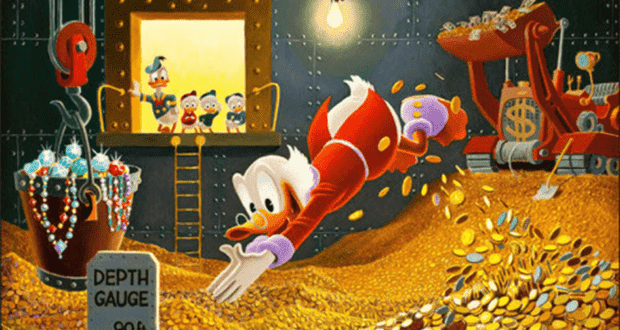 Wealthy Disney Characters Valued Well Beyond Their Net Worth

Walt Disney Entertainment has produced a wealth of characters throughout the years, many of whom have actively produced their very own wealth on screen. And while many of us may admittedly feel compelled to evaluate portrayals of rich folk with more objectionability than we would the meeker underdogs we love for what they lack (and make up for), Disney somehow succeeds at portraying their wealthier character invents in a largely positive and likable light.

Of course, there are some villains thrown in as well, but even they exude a certain million-dollar appeal we can’t deny. Because there are so many to pick and choose from, we’re singling out eight examples of rich Disney characters valued well beyond their actual net worth

A very obvious observation is that there are many members of royalty featured throughout Walt Disney Entertainment. And it goes without saying that royalty signifies wealth. Sure, there are cases to be argued, like Cinderella, Belle, and Tiana, who all married into nobility, and Aurora and Rapunzel, who grew up humbly despite truly being princesses. All the same, here’s a lineup of our notable wealthy noble picks:

Related: Fit For A Prince: A Profile of Disney’s Notable Male Protagonists

Not your typical rags to riches story, this cute little kitty tale follows a family of felines who not only have an owner of great wealth but also have an inheritance to their names as her next of kin, so to speak. Going from a lavish life lived in the lap of luxury to a situation that seems desolate and then back again to the former, the final verdict is that the cats comprising of The Aristocats ensemble may very well be the richest pets in all of Walt Disney Animation.

There are many gray areas in regard to wealth that can be found in older live-action Walt Disney Pictures. We see one example with the representation of the Banks family in Mary Poppins. Clearly, they are in a position to hire help for their house despite being part of working-class society. Another example can be found in both the original and remake versions of The Parent Trap, in which both parents appear to be rather wealthy in their individual lives. But it’s the very obvious display of riches as seen in Disney’s Pollyanna from 1960 that leaves no question about the wealth of the title heroine’s Aunt Polly. Not only is Aunt Polly the richest spinster in town but she basically owns the town with power and privilege that often goes unchecked or challenged.

Related: Disney Characters with the Most Giving Nature

Another unquestionable account for wealth portrayed in a live-action classic from Walt Disney Pictures is this titular protagonist of the Disney musical The Happiest Millionaire. Less familiar to many fans of today, the film was released back in 1967 and stars Fred MacMurray and Tommy Steele in the roles of the carefree “happy” millionaire Anthony J. Drexel Biddle (of Drexel University fame) and his newly hired butler.

This one may come as a bit of a surprise to anyone thinking back to her longing to marry off one of her daughters to the Prince along with her declaration of ruination upon learning of her second husband’s demise in the live-action version of Cinderella from 2015, but the records show that Lady Tremaine was in fact a wealthy woman even before her marriages. In the original follow-up sequels to the original animated classic, it is even stated that Lady Tremaine hailed from a wealthy family before her first marriage. And it goes without saying that her inheritance from that marriage in accumulation to what came out of her marriage to Cinderella’s father elevates her considerably in social ranking and wealth. So don’t let those excuses for firing servants and expressions of desperation fool you!

Superhero fanatics and fans of Marvel specifically can tell you right off the bat that Iron Man, when assuming his civilian form, still boasts a pretty iron-clad net worth. Serving as the CEO of Stark Industries—a position he inherited from his father Howard Stark, who founded the company, Tony Stark uses his position, high-tech accessibility, and astute intelligence for the greater good—serving to protect and to make the world a better place.

This fashionista of 101 Dalmatians infamy is another member of Disney’s wealthy select. To say that she is snobby or miserly would be a vast understatement for her villainous persona. Sure, she is all those things as well and gets plenty of joy in looking down on Roger for his chosen path for a profession, but the fact that she covets other forms of riches—largely those that come in the form of dogs—really speaks volumes about what she is seriously lacking.

This affluent uncle of Donald Duck may very well be Disney’s most beloved tycoon of all. With an estimated value of about $44.1 billion according to Reuters, and holding one of the top spots on Forbes’ Fictional 15 list for wealthiest imaginary characters (even beating out Richie Rich), Scrooge McDuck truly is the very epitome of cartoon richness. From his earliest character developments dating back to 1947 to his transformation over time into the beloved lead in DuckTales, Scrooge McDuck (very obviously named after the character of Ebenezer Scrooge by Charles Dickens, whom he also portrayed in Mickey’s Christmas Carol in 1983) does something amazing in keeping his classic miserly ways while also going on to be a contested favorite just the same.

There are admittedly many more million-dollar heroes and heroines we could go on to name in addition to these exceptional eight that dominate the elite scene within Walt Disney Entertainment. But the true value lies in Disney’s richness in character development on a whole and their unending abundance of magic and imagination that continues to this day.