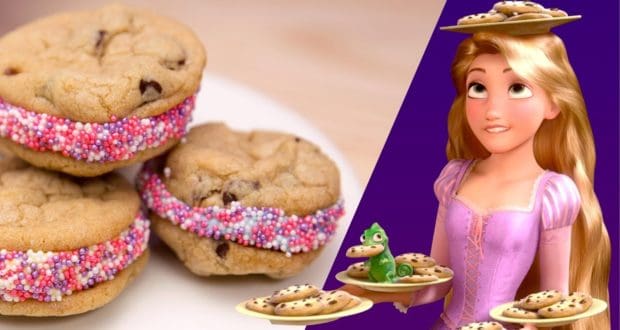 Which Desserts Would Disney Princesses Seek Out On A Visit to Walt Disney World Resort?

Disney World is known for offering up some of the most decadent desserts and other sweets. They span a wide range of variations, from cakes to cookies, fruit-filled concoctions to mousses, ice cream and so much more. While many treats are themed with your favorite character likeness or as to follow a venue’s given motif, there are other enticements that do not single out specifics but still remind us of Disney all the same. The Disney Princesses, for example, have a pretty big fan base. Many desserts have been inspired by them directly through the years, while others tend to indirectly pay tribute to them by representing their heritage or implied tastes as portrayed in film. Have you ever wondered which desserts the various Princesses would be most likely to seek out on a visit to Walt Disney World Resort? We’ve highlighted the likely choices right here.

We can only assume by her enthusiasm to consume a poison apple offered to her that Snow White has a taste for all things apple. And seeing as her origins are that of German descent, we can surmise that she’s most likely to head to EPCOT’s Germany Pavilion to indulge in an apple-based dessert of sorts. Her visit would most probably take her to Karamell-Küche, where they offer a wide range of novelty candy apples that are right up her alley. Additional satisfaction can be found with their Caramel Apple Oatmeal Cookie offering, Caramel Apple Square, or their exceptional Caramel Apple Tart. Take note that there are numerous other venues all throughout Walt Disney World Resort that offer up versatile candy apple variations and other exceptional apple concoctions as well.

It can be a little difficult trying to figure out just what Cinderella would choose to have for dessert if out and about Walt Disney World Resort. Fortunately for us, 1900 Park Fare unraveled the mystery by introducing us to Strawberry Soup, noting it is a favorite of Cinderella’s. Don’t let the word “soup” fool you. Served chilled, this smooth blend of cream and strawberry makes for a sweet sendoff and is offered during their dinner buffet when open and in full operation. While this venue remains closed for the present time, Cinderella is likely satisfying her sweet tooth with Disney’s many seasonal pumpkin offerings. Given the fact that she grows pumpkins at home, it’s assumed she uses the fruits of her labor in cooking and baking readily.

We don’t have many clues to go by regarding just what Princess Aurora of Disney’s Sleeping Beauty may choose for a likely dessert, but given her track record for falling asleep, we’d like to assume that she’d probably seek out a specialty coffee to help her stay awake. And thankfully, Joffrey’s kiosks are all around the various parks. Of course, you’ll find plenty of other great stops for seeking out coffee as well. BoardWalk Bakery, for example, boasts a wide range of lattes, Espresso, and even Double Espresso. For A coffee-oriented desert to eat, however, Aurora may find just the thing at Cinderella’s Royal Table by ordering Coffee Pots de Crème, which comes as a coffee-infused, dairy-free coconut custard with passion fruit gelée and crumbled chocolate espresso beans.

It’s not easy to find a dessert offering that is literally sea-based. However, there are myriad sea-themed enticements all throughout Disney World to readily satisfy the tastes of this “little mermaid.” To start with, a likely choice would be to head on over to Coral Reef Restaurant in EPCOT where they feature their decadent Chocolate Wave—a flourless chocolate cake served warm with an accompaniment of raspberry gelato. Another option awaits her at Be Our Guest Restaurant in the form of the Ned Land Sea Cake, which is comprised of a lemon and strawberry shell cake along with a pistachio microwave cake, chocolate rocks, “the grey stuff,” and Swedish Fish. BoardWalk Ice Cream and Beaches & Cream Soda Shop both serve up nautically themed specialty sundaes Ariel would be likely to try as well.

Related: 21 of the Best Sundaes in Disney World

It’s pretty obvious that Belle would seek out the aforementioned Be Our Guest Restaurant for fine French cuisine and equally exceptional dessert offerings. That fabled “grey stuff” is a part of many concoctions, including the cute White Chocolate “Chip” Cup featured on the menu. You’ll also notice the Lemon Jam Macaron as well. Being French, we can only assume Belle is familiar with such morsels as macarons and would probably find plenty more to munch on by heading on over to EPCOT’s France Pavilion as well.

Princess Jasmine of Disney’s Aladdin would probably head to the Morocco Pavilion in EPCOT. And it is here that she is likely to stop in to experience the fine eats on the menu at Tangierine Café: Flavors of Medina. As for dessert, their featured Pistachio Cake is the likely enticement to grab her attention, with its presentation of cinnamon pastry cream and candied walnuts to boot.

Our picks for Pocahontas are likely the healthiest options out of all the other Disney Princess recommendations. Given her appreciation for nature and simpler pleasures, we’re betting that Pocahontas would probably opt more for fresh fruit picks, which can be found at various kiosks all throughout the parks. From whole fruits to fruit cups, there are endless varieties to what she may find to delight in. She may also be familiar with popping corn and therefore have an eagerness to try some of the sweet popcorn variations that are so plentiful throughout the parks as well.

This titular heroine would probably feel more at home in EPCOT’s China Pavilion than at any other place within Disney’s many parks. And it is here that she’d most likely seek out dessert at two great venues–Lotus Blossom Café and Nine Dragons Restaurant. At the first we can easily imagine Mulan ordering Lychee Ice Cream or even some of their scrumptious Caramel Ginger Ice Cream. The latter is also served up at Nine Dragons as well, along with another novelty—Boba Blue Magic Strawberry-Red Bean Ice Cream.

As a girl from New Orleans, and one who loves to cook at that, it’s safe to assume that Tiana would probably make her rounds around Disney’s Port Orleans—French Quarter Resort quite frequently. She most likely would stop in at the hotel’s main eatery, Sassagoula Floatwoks and Food Factory, to get a little taste of home and see how their fare compares. If she were hankering for a little dessert here, she’d probably settle on the Mardi Gras King Cake. But the real deal would be trying those famous Beignets, which are currently being offered at Scat Cat’s Club Café.

It’s a little difficult to single out what this star of Tangled may be craving on a visit to Walt Disney World Resort, but we do have at least two clues revealed to us during her opening musical number “When Will My Life Begin?” During the sequence we see Rapunzel baking a pie at one point and then holding a plate of cookies. So we at least know these are likely suggestions. For pie, she’d probably enjoy a stop at Whispering Canyon Café at Disney’s Wilderness Lodge to order a slice of their Granny Smith Apple Pie À la Mode. And while cookies are in great abundance at just about every Disney venue, we’re narrowing down the search to Karamell-Küche, given Rapunzel’s implied German heritage. Here she would likely enjoy four distant variations—the Caramel Apple Oatmeal Cookie, Caramel Filled Chocolate Cookie, Peanut Butter Caramel Crunch Cookie, and the German Chocolate Chip Cookie with Pecans.

These royal sisters of Disney’s Frozen may have their differences, but one thing they both appear to share is a weakness for chocolate. This is an admittedly broad category to tackle, as Disney is known from countless chocolate concoctions. Therefore, we will once again keep to regional renderings by assuming Elsa and Anna would most likely break their journey at Kringla Bakeri Og Kafe in EPCOT’s Norway Pavilion. The most prominent chocolate culminations here include the Chocolate Mickey Tart and the Triple Chocolate-Chip Cookie. They’d also likely order the Norwegian Kringla, electing for the chocolate topping option.

We get to see this protagonist of Disney-Pixar’s Brave eating Empire Biscuits during the film, but unfortunately there is no real equivalent that exists in Disney World at present time. Our closest suggestion would be for Merida to buy a box of Disney Parks specialty Walker Cookie Short Rounds to satisfy her craving. She may also delight in some of the featured sweets being offered on the menu at Rose & Crown over at EPCOT’s United Kingdom Pavilion. Two appetizing items that come to mind there are their Sticky Toffee Pudding and their English Trifle. The first is a steamed pudding cake with warm vanilla custard and hot butter-rum sauce. The second is a compilation of layered strawberries, vanilla custard, graham crackers, and whipped cream.

In order to satisfy her South Pacific tastes for something sweet, we can conclude that this title heroine is likely to head over to Disney’s Polynesian Village Resort first and foremost. While the famed Dole Whip of Disney legend can also be found just across the water in Magic Kingdom Park, it is notably served up as a resort exclusive at Pineapple Lanai. But this isn’t the only food place she’d stop in at while onsite. At the resort’s renowned Kona Café there’s a delicious Coconut Tapioca pudding ready to deliver a sweet sendoff for diners. At their family-style favorite ‘Ohana they feature a specialty Pineapple Coconut Bread Pudding to conclude the experience.

You can eat like a royal wherever you go in Walt Disney World Resort. On that note, the Disney Princesses would probably be inclined to visit far more venues and try dozens of other desserts than those highlighted here. And let’s not forget about all those plentiful options over in Disney Springs in addition. While the categories are broad and unending now you have at least an idea of what each Disney Princess would have for dessert at Walt Disney World Resort.