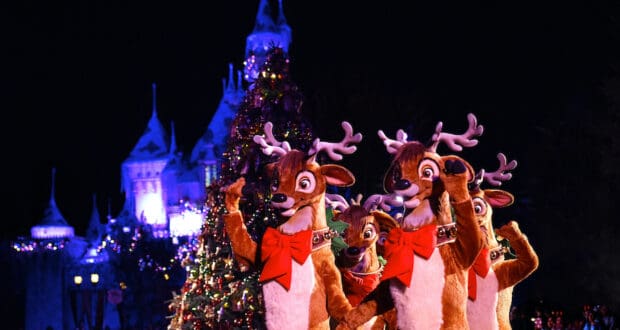 Halloween is officially over for the year, and Walt Disney World is wasting no time in adjusting its Park decor to match the holidays. If you love Disney and you love the holiday season, then you’re in luck! Walt Disney World’s Magic Kingdom is already decked out in festive Christmas garb, and Disney Guests are sharing pictures of the Park’s new look online (including in the Tweet below). According to Ashley Carter in the second Tweet below, Disney also released footage of the behind-the-scenes work that goes into changing the Magic Kingdom’s decorations overnight.

It’s beginning to look a lot like Christmas at Disney World. Holiday decorations are up at Magic Kingdom. pic.twitter.com/FSccJJ6nuL

Disney World has released time-lapse video of the Christmas decorations being installed at Magic Kingdom as the resort prepares for the holiday season. pic.twitter.com/HWOA7ZMczt

The amount of detail that goes into Walt Disney World decorations never ceases to impress Park Guests, and while some Disney Guests will be surprised to see that holiday decorations are being put in place so quickly after Halloween, other Guests will greet the festive new aesthetic with delight. Whether you’re an experienced Disney Guest or a newcomer, this holiday season at Walt Disney World is definitely not going to be one to miss! Cinderella’s Castle is still keeping its special Walt Disney World 50th anniversary outfit, so to speak, and there’s also a new augmented reality lens option that will allow Disney Guests in the Park to take ‘pictures’ with different versions of the castle (including when it was only partially built decades ago!). With holiday festivities in store like Disney Merriest Nites or the Disney Sunset Seasons Greetings special, a special Star Wars holiday series, and dozens of limited-edition holiday treats to eat, Disney Guests who visit during the holiday season are bound to experience some particularly magical celebrations! If you’re not going to be able to visit Disneyland or Walt Disney World this Christmas, you can still celebrate in plenty of magical Disney ways. All you need is some warm clothes, comfy blankets, delicious drinks or snacks, and entertaining activities like family games or reading an exciting new book!