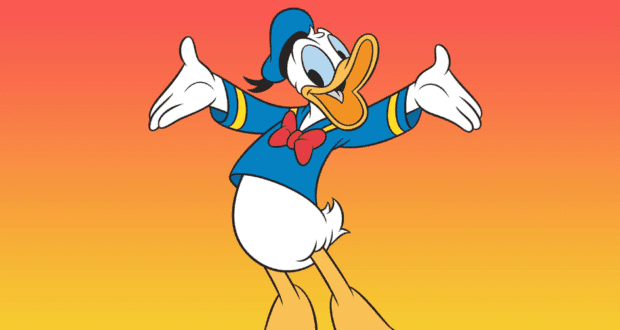 They say that birds of a feather flock together, but where Disney’s Donald Duck is concerned, he is an “odd duck” who stands out from the crowd. But not fitting in is perhaps one of the countless ways in which this fine waterfowl endears himself to so many fans who count him as a personal favorite. Sure, you have Mickey, Minnie, Goofy, and all the rest, but there’s just so much to be said about Donald’s very specific uniqueness as a character and his impressive resume of attributes over the years. Here are eight defining facts that set Donald Duck apart from the rest of the flock.

Who can lay claim to having three possible birthdays? Donald Duck can, that’s who! And he may very well be the only one who can. That’s because traditionally, the official birthdays assigned to cartoon characters have almost always been synonymous with the same dates on which they made their debut film appearance. In Donald’s case, that would make his birthday June 9, as he first came on the scene on this date back in 1934 with the premiere of Walt Disney’s The Wise Little Hen. But in the live-action/cartoon feature The Three Caballeros from 1944, Donald celebrates his birthday as one of the events in the film, and it is stated to have been on Friday the 13th, no less. While a month was not given for when this Friday the 13th was supposed to be, the Disneyland episode “The Donald Duck Story” shed some light on the mystery by offering up the fact that Donald Duck was born on a Friday the 13th in 1932. That leaves only May being the month in which Donald Duck was born. However, in adding to the confusion, the 1949 short “Happy Birthday Donald” notes that his birthday is March 13. That means it was likely during the year 1914. Therefore, he can claim at least three different birthdays—June 9, 1934, May 13, 1932, and March 13, 1914!

Unlike other Disney characters, whose full names have only either been speculated or used without adequate continuity, Donald Duck stands out as being the only one who can actually attest to having an officially confirmed-on-screen middle name used directly in a cartoon. The work we are referring to is the short titled “Donald Gets Drafted” from 1942. In it, we learn that Donald’s full name is Donald Fauntleroy Duck, along with many other interesting facts about him.

6. Donald Duck is Based on a Real Duck

Mickey and the Gang are all obviously based on real animals. You’ve got Mickey and Minnie as mice, Goofy and Pluto as dogs, and even Clarabelle Cow and Horace Horsecollar (cow and horse, respectively) from older shorts, along with several others. While all of the above does not conform to a specified breed, Donald is based on an actual duck breed—the Pekin Duck. Pekins are distinguishable for their white plumage and larger size. And when you look at them, you can’t help but see how they inspired the art renderings for Donald Duck.

A very humorous 50th “birthday” celebration that took place at Walt Disney World Resort back in 1984 welcomed in 50 fellow Pekin Ducks to the Magic Kingdom, who came out to party with the big guy and joined him on a precession leading up to Cinderella Castle. Things did not go as planned, however, when the ducks opted for a more aqueous destination, choosing the nearby waters over the planned parade course.

5. Donald Duck was Created as an Antithesis to Mickey Mouse

With earlier Disney character creations, we usually only ever saw two scenarios play out—the design for good-as-gold good guys and those of villainous baddies. But when Walt Disney conceived of the Donald Duck character, it was done with the most unusual intentions in mind. What he was really going for was a way to create a character that wasn’t a bad guy but was a mischievous antithesis of sorts to the well-behaved Mickey Mouse nevertheless. Because Mickey was already a model mouse, and Walt did not want to ruin his reputation by painting him in a bad light, he opted for a new character who would be up to the challenge of acting out. He needed a fun rebel of sorts—a hotheaded quacking duck! So, it’s safe to say that in imaging Donald Duck it was the first time that a Disney good guy was created to fulfill negative intentions. During World War II, Disney created several animated works featuring Donald Duck, fulfilling his patriotic duties by willingly serving in the United States Army after being drafted. Initially, Donald’s goal was to be a pilot for the Army Air Corps, but he ended up in the infantry instead. He does eventually go on to carry out a successful commando mission and therefore becomes a celebrated wartime hero and veteran who is still praised for his contributions to this day.

Donald Duck’s presence in pop culture extends well beyond the realm of Disney. In fact, he’s even served as the representative mascot for the University of Oregon’s Fighting Ducks since 1947. Walt Disney personally gave the school’s athletic director Leo Harris permission to use the Donald Duck image for their mascot, sealing the deal with a handshake.

Another time you may have seen Donald’s familiar endorsement beyond the Walt Disney Company is on Donald Duck Orange Juice. Manufactured by Citrus World, Inc. by Florida’s Natural Growers, Donald Duck Orange Juice, along with Donald Duck Apple Juice, is part of the Mickey and Friends product line for the company. While Mickey is the face of the brand’s fruit juice and Goofy is featured on their tropical juice, Donald is the one who represents both apples and oranges!

Related: ‘Darkwing Duck’ Reboot in the Works for Disney+

2. Donald Duck has an Asteroid Named After Him

Mickey Mouse may have a crater, and Pluto may have a “non” planet to his credit, but Donald Duck is the only one in the group who can lay claim to having his very own asteroid. Discovered by Italian astronomers Piero Sicoli and Pierangelo Ghezzi back in 1995, the asteroid—12410—received its official “Donald Duck” naming on September 23, 2010.

1. Donald Duck is Part of a Notable Brood

Many members of Mickey’s Gang have extended family members who have made their presence known in various Disney works throughout the years. But Donald Duck arguably has the most connections to characters who have gone on to become sensations independent of their associations with the endearing duck. Scrooge McDuck, who is brother to Donald’s mother, Hortense (McDuck) Duck, is perhaps the most popular spinoff persona in all of Donald’s family. Then let’s not forget about those lovable troublemaking nephews of his—Huey, Dewey, and Louie. They are related to Donald as the sons of his twin sister Della. It’s also come up that Daisy Duck’s brother possibly married Della and is, therefore, the father of the three. This would account for why Huey, Dewey, and Louie also refer to Daisy as their aunt since she and Donald are not married. To answer the question about the surname sameness of “Duck,” comic book writer and creator of the Duck Family Tree, Don Rosa, stated that to have the last name “Duck” is the waterfowl equivalent to having the name Smith or Jones.

Other members of Donald’s family include his father, Quackmore Duck, Gander Goose, and various ties to the Loons, Coots, Grebes, Gadwalls, O’Drakes, and Mallards (yes, that even includes Darkwing Duck), among many others.

As you can see, Donald is one very unique duck, with many credits and attributes to his name. While there’s plenty to say about the versatility of all members making up the Mickey Mouse Friends group, Donald is the one that exudes true one-of-a-kind originality that no one else can hold a candle to.