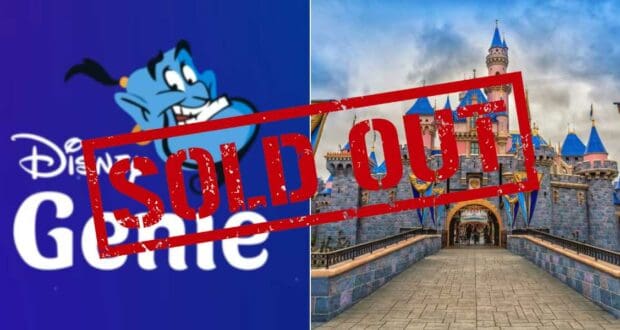 Genie + Sells Out In Disney Park For the First Time

The Disneyland Resort saw a first yesterday when Genie+ sold out at the Disney Resort—a first for either coast.

The Walt Disney Company and Walt Disney Imagineering are constantly working to upgrade each Disney Park and elevate the Disney experience for all Guests. That often looks like introducing new rides and attractions—think the retheme of Splash Mountain to Tiana’s Bayou Adventure or the upcoming Journey of Water in Walt Disney World Resort Theme Park, EPCOT.

The Disney Genie suite—Genie, Genie+, and Lightning Lane—has been highly contested since its introduction to the Disney Parks and Disney Resort. As Disney fans know, the system was used to replace the previously free FastPass+ system, and many have listed multiple complaints with the functionality of the service.

However, one of the most significant issues that fans have identified with it is that it’s a paid service, yet often causes more problems than it solves. Most recently, Guests have been frustrated with the change to its payment structure, which moved from a fixed structure to a variable one.

Despite all of this, Genie+ achieved a first yesterday at the Disneyland Resort.

Somehow I missed this yesterday – Genie+ sold out at Disneyland Resort yesterday. I believe this is a first for either coast? https://t.co/OOXYNcPXHP

Somehow I missed this yesterday – Genie+ sold out at Disneyland Resort yesterday. I believe this is a first for either coast?

Disney fans were divided on whether this was a good sign or more indicative of Disney’s increasing greed. Fan Adam Brown opined, “That’s actually a positive development. For Genie+ to actually have value, it’s distribution must be limited. The problem with FP+ was insufficient capacity to actually give EVERY guest their three preferred passes.”

Martin smith disagreed. He said, “That’s a miserable day then. Pay more – on top of admission – for a few rides, or suffer the even more bloated standby lines. They’ve really made a mess of the parks.”

Whether Guests love or hate the service, what seems apparent is that it is here to stay, and Guests are getting used to its presence in the Disney Parks. The Disney Genie-Lightning Lane system is available at all Theme Parks at Walt Disney World Resort including Animal Kingdom Park, Magic Kingdom Park and the others, as well as Disneyland Park and Disney California Adventure at Disneyland Resort at attractions like Haunted Mansion, Slinky Dog Dash, Space Mountain, Remy’s Ratatouille Adventure and more.

Disney Genie Plus Disneyland Resort Genie+ 2022-12-28
Priyanka
Previous: Important Questions to Ask Yourself When Choosing a Disney Resort
Next: Shut Down of Disney Park Ride Leaves Fans in Tears For Surprising Reason