Disney’s conservation efforts can be seen all around the Walt Disney World Resort, from solar panels that work to provide energy to much of the property, to initiatives created by Cast Members to promote sustainability, to all of the wildlife that resides at Disney’s Animal Kingdom theme park. One such animal at Disney’s Animal Kingdom, Gino, the silverback gorilla, just celebrated his 41st birthday, making a not only a milestone in Gino’s life, but also in Disney’s commitment to conservation efforts in the park and around the world. Gino leads the family troop of western lowland gorillas in Disney’s Animal Kingdom park, but during his birthday this special guy received a day “off” to enjoy a birthday celebration created just for him by Disney Cast Members. For his birthday, Gino enjoyed a “cake” made out of his favorite foods (that also promote a healthy yet natural diet) and some of his biggest fans were able to stop by to wish him a very happy birthday. As one of the first animals to arrive at the park, Gino has lived at Disney’s Animal Kingdom even since before the park opened to Guests in 1998. He has been a major presence and a draw for Guests exploring the Gorilla Falls Exploration Trail (formerly called the Pangani Forest Exploration Trail) for more than 20 years. Even if you have not visited the park recently, you may have seen him on Disney+! Gino was featured in the documentary series The Magic of Disney’s Animal Kingdom that you can stream on Disney+ right from home.

At the heart of Gino’s birthday celebration and day to day life are his family of Disney Cast Members, some of which who have been with him since the beginning. The world-class care Disney’s Animal Kingdom Cast Members provide Gino and other animals in the park allows him to work on new behaviors, enhanced diets, and skills that help him actively participate in his own care. 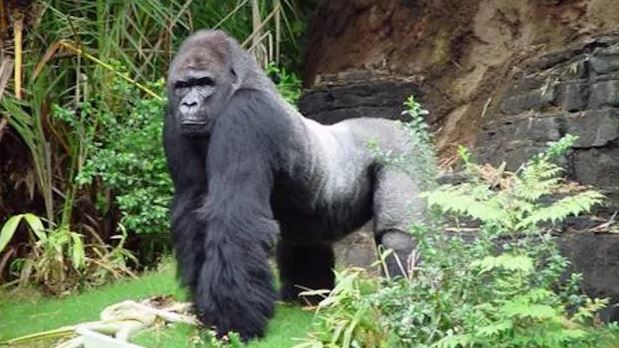 A recent behavior Cast Members were able to teach Gino was getting him to allow them to brush his teeth, which may sound small but good oral hygiene is actually an important part of a gorilla’s overall health and wellbeing. The technique used was successful on Gino, so Cast Members later applied it to other gorillas in the park and since then the behavior has been shared with the Gorilla Rehabilitation and Conservation Education (GRACE) Center in the Democratic Republic of the Congo as well.

Join us in wishing Gino a happiest 41st birthday, and be sure to stop by the Gorilla Falls Exploration Trail near the exit of Kilimanjaro Safaris to see him next time you are in the park.