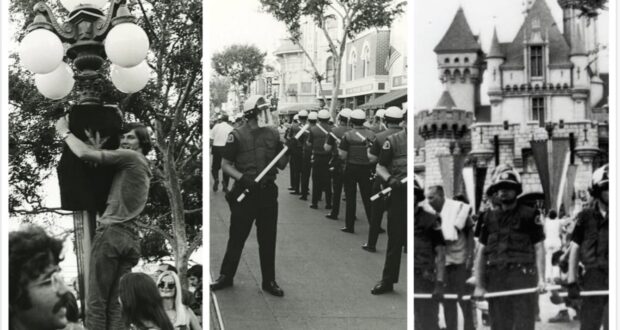 Disney Parks have often unintentionally become the setting for historically significant events, though most are widely known among Disney Fanatics. You may be aware of the fact that former President Nixon’s infamous “I am not a crook speech” took place at Disney’s Contemporary Resort, or that the Beatles officially broke up at Disney’s Polynesian Village Resort, but did you know about the 1970 invasion of Disneyland? This is that story…

The term Yippie was first used by American journalist and comedian Paul Krassner. “Yippie” was a label he used to describe the ongoing phenomenon of the radicalization of hippies, the counter-cultural movement of the 1960s and 1970’s that rejected mainstream American life. This was an organic amalgamation of psychedelic hippies who used psychedelic drugs such as LSD to produce hallucinations in an effort to expand their consciousness and political activists who openly opposed and frequently protested the Vietnam war while advocating for free speech. In the process of the counter-cultural cultural exchange at political demonstrations, the psychedelic art and music of the hippies merged with the long hair and messages of peace from the antiwar movement. On New Year’s Eve of 1967, activist and writer Anita Hoffman along with her fellow Yippies realized mainstream media outlets known as “strait-laced types” needed something to describe them and coined the term “Youth International Party” (YIP) in an effort to legitimize their message.

They held their first press conference in New York City at the Americana Hotel on March 17, 1968, ahead of the Democratic National Convention in Chicago, and the 1968 presidential election. The Vietnam war started under sitting Democratic president Lyndon B. Johnson and was ended under 1968 election winner Republican Richard Nixon. Yippies took a seemingly radical approach ahead of the DNC, which they deemed “The Convention of Death”; writing articles, handing out fliers, and holding rallies to announce that they were coming to Chicago. These included threats to block public roads, prevent the intervention of police stations and National Guard armories, taint the city’s water supply with LSD, or storm the convention. Chicago City officials had to be prepared for the potential realization of any and all of these threats. Though none of these threats would ultimately be acted upon, they had their desired effect.

Yippie tactics often involved using elements of street theater to draw the attention of mainstream America to their social causes, most especially to convey the lack of control most Americans had over the political process. At the time, before the ratification of the 26th Amendment to the Constitution on July 1, 1971, the voting age in most states was 21, meaning that 18-year-olds who were legally able to work, get married, and be drafted to fight in the war could not vote. The Youth International Party attempted to protest in the form of counter-cultural activities which drew attention from the decision-making process in the convention hall. This took the form of the Yippies’ “Festival of Life” which drew police attention. News networks consequently moved their coverage away from the convention hall where the delegates were voting on the Democratic nomination, and to the confrontation in front of the Conrad Hilton. This ultimately leads to the arrest of the famous Chicago Seven; Rennie Davis, David Dellinger, John Froines, Tom Hayden, Abbie Hoffman, Jerry Rubin, and Lee Weiner.

The Invasion of Disneyland 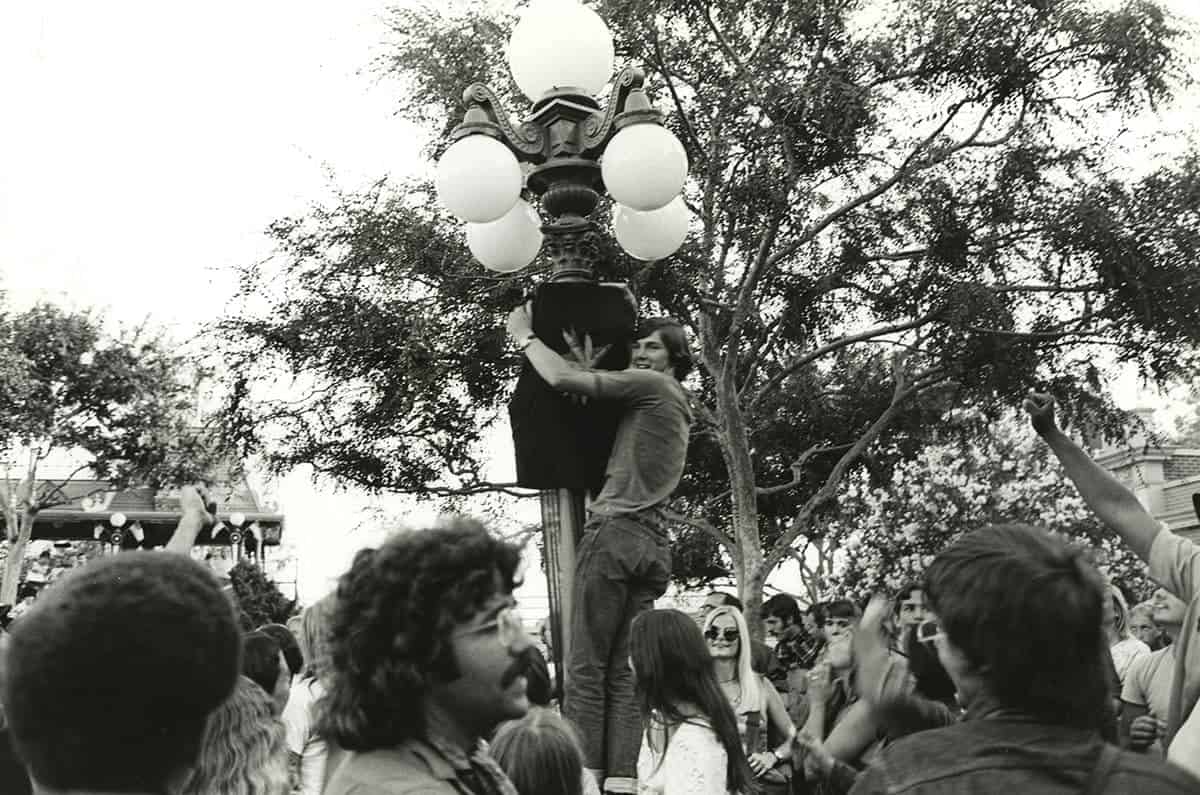 Members of the Youth International Party (YIP) AKA “Yippies” walk down Main Street in Disneyland as one member proudly mounts a lamppost to display their flag. Credit: LAMag.com.

On December 15, 1966, Walt Disney died, leaving behind a great legacy. Four years later, in July of 1970 notices appeared in the Los Angeles Free Press announcing an “International Pow-Wow” at Disneyland. Just as they did two years prior, the Yippies were announcing their arrival. The notice depicted a tuxedo-ed Mickey Mouse complete with top hat and armed with a rifle, a message clearly meant to intimidate. But the most often quoted flyer listed a schedule of outlandish “events” for participating Yippies.

“Black Panther Hot Breakfast 9 a.m. at Aunt Jemima’s Pancake House, rally to liberate Minnie Mouse in front of Fantasyland noon, a mid-day feast barbecue of Porky Pig, and a late afternoon infiltration of Tom Sawyer Island. Declaring a free state, brothers and sisters will then have a smoke-in and festival. Get it over on Disneyland, August 6. YIPPIE!”

And on August 6, 1970, on the 25th anniversary of the bombing of Hiroshima, local Los Angeles Yippies invaded Disneyland. This included hoisting their flag (which featured a black background representing anarchy, five pointed red star representing communism, and a marijuana leaf which represented love of the environment as well as cannabis) at City Hall, and the taking of Tom Sawyer’s Island. 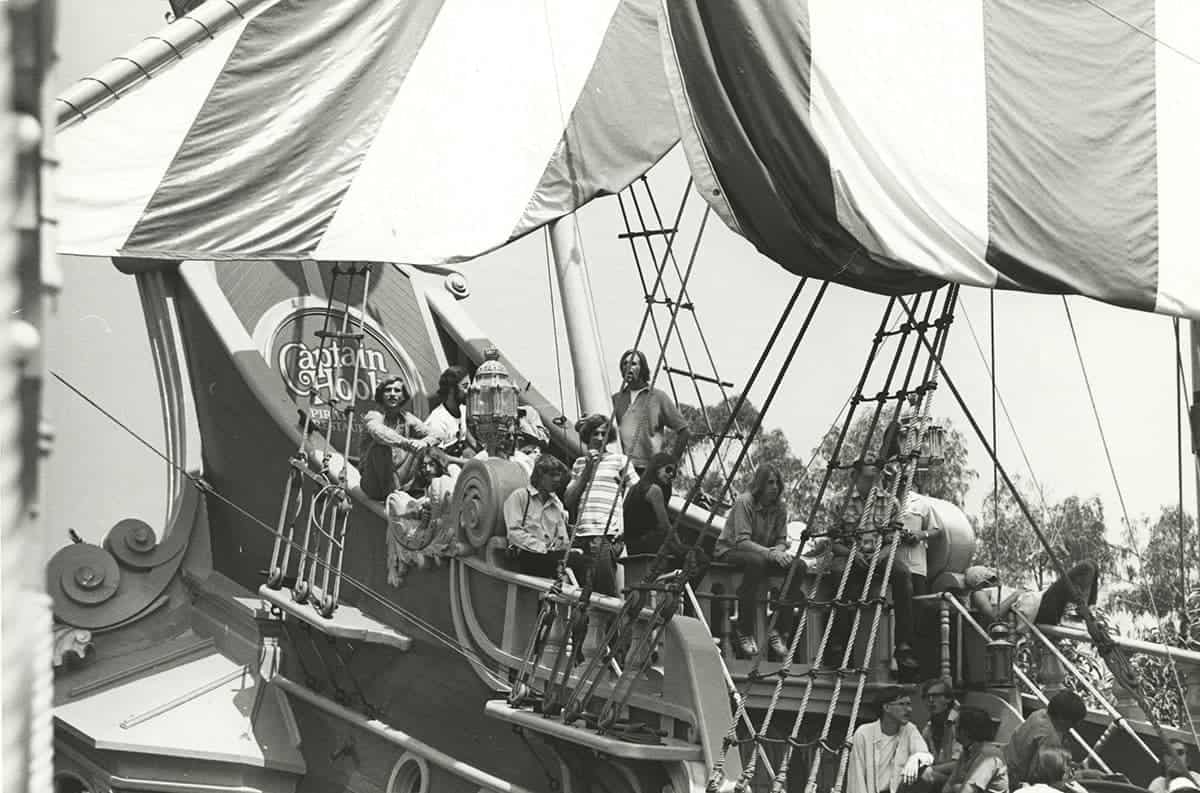 Yippies sit aboard Captain Hook’s Galley, an attraction which originally opened with Disneyland in 1955 as the Chicken of the Sea Pirate Ship, and was closed permanently in 1982. Credit: LAMag.com

Firsthand accounts detail that after disembarking from the rafts to Tom Sawyer Island, the Yippies claimed the place as their own, successfully “invading”. The gathered Yippies flew the Viet Cong flag, smoked blunts, and called to “Free Charlie Manson,” (the cult leader who was arrested and convicted for the “Manson Family Murders” on November 16, 1970). Park security frantically halted rafts to the island, closing it off to guests. 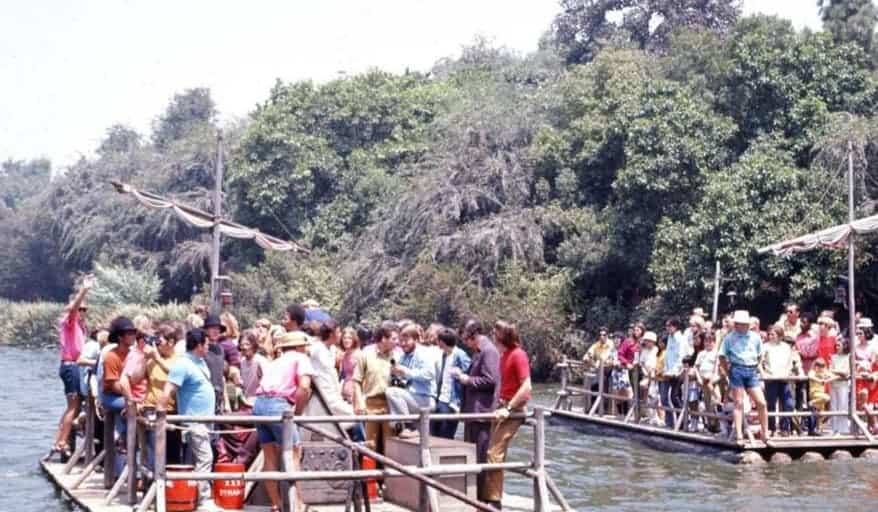 YIP members and other Disneyland guests board the rafts to Tom Sawyer Island. The attraction was re-themed in 2007 as Pirate’s Lair on Tom Sawyer Island in conjunction with the release of Pirates of the Caribbean: At World’s End, the third film in the franchise. Credit: LAMag.com

But Disneyland officials still did not call the police. Not until the Yippies decided to march down Main Street, straight towards Bank of America at around 5 p.m. A Bank of America location near the University of California’s Santa Barbara campus had been burned down in a recent antiwar protest, as the bank was associated with funding the war. Riot cops from local police departments then mobilized. 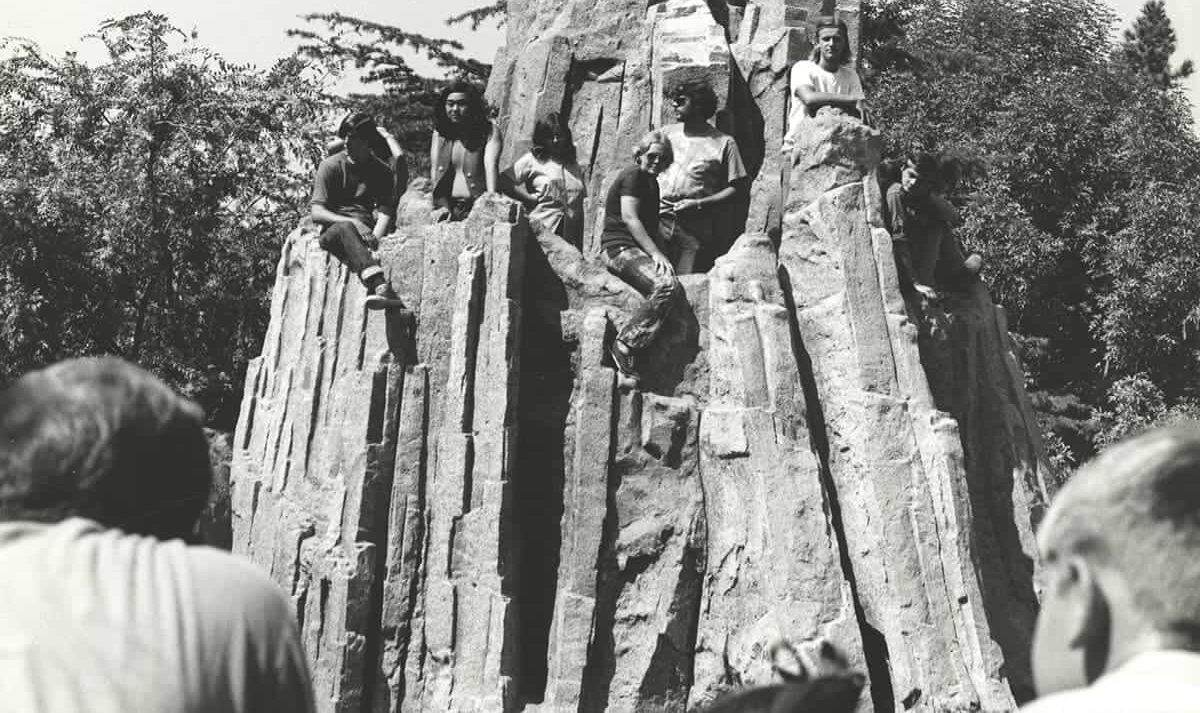 Yippies settle on top of Castle Rock, one of many interactive climbable structures of Tom Sawyer Island, looking down upon park guests. Credit: LAMag.com

Yells were heard, a Yippie attempted to rip down the American flag in Town Square, and a skirmish between the two groups ensued. Soon after, a helicopter from Anaheim City Hall was hovering over Main Street, as an officer holding a bullhorn ordered everyone below to immediately evacuate. 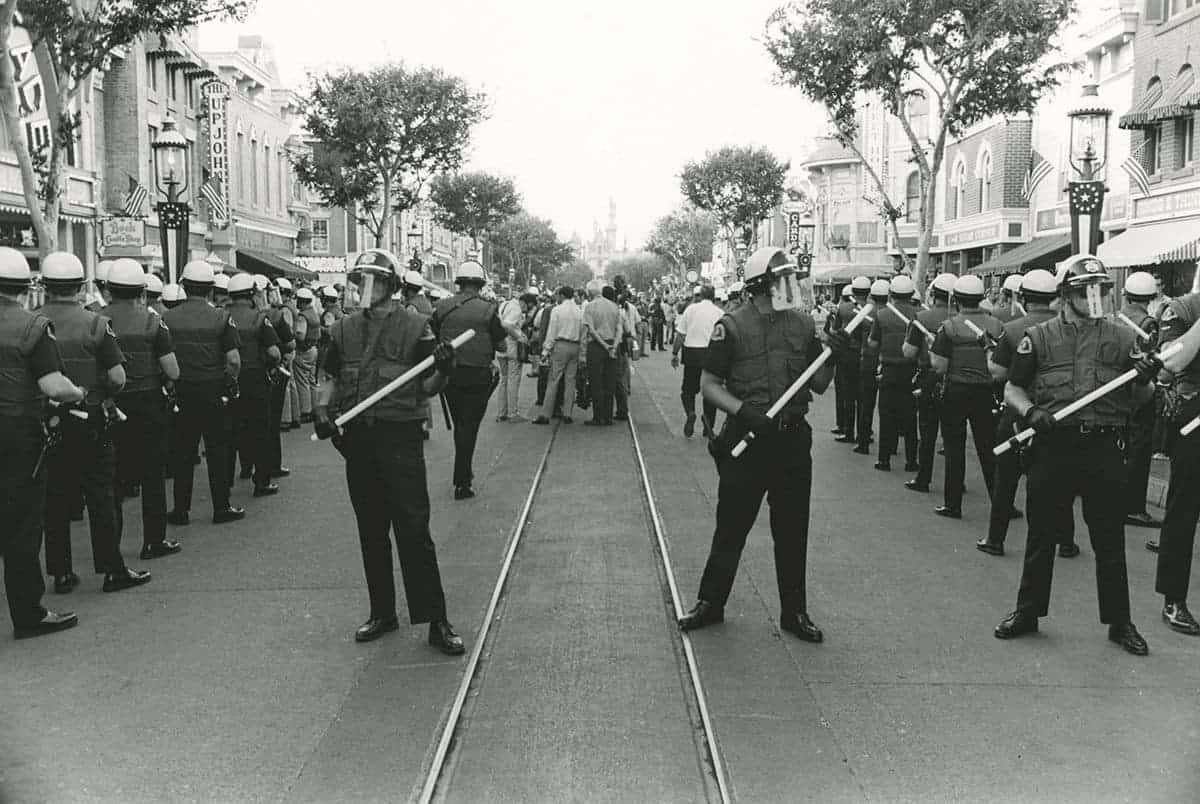 An estimated 300 Yippies breached the park that day, mingling with 30,000 other Disneyland visitors. Approximately 100 riot police were deployed throughout the park to manage potential disturbances. Credit: LAMag.com

It was only the second time that Disney was forced to close down due to an emergency, preceded by the assassination of President Kennedy on Friday, November 22, 1963. 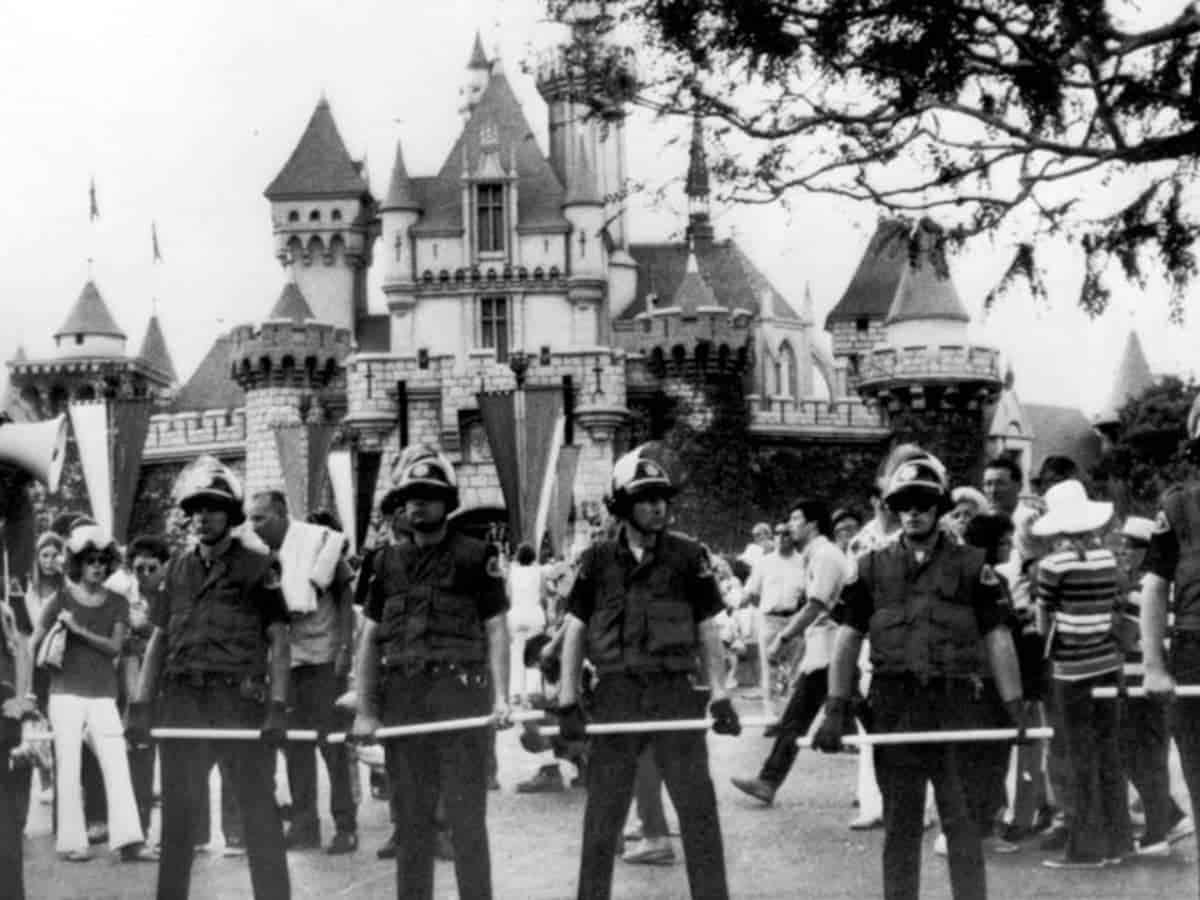 These officers stand prepared, ready for any and all potential dangers in a time of social unrest, while standing directly in front of Sleeping Beauty’s Castle in Disneyland. Credit: LAMag.com

Ultimately, no one was injured and only 23 demonstrators were arrested on charges ranging from disturbing the peace to drug possession. And that is the unbelievably true story of the short-lived invasion of Disneyland.