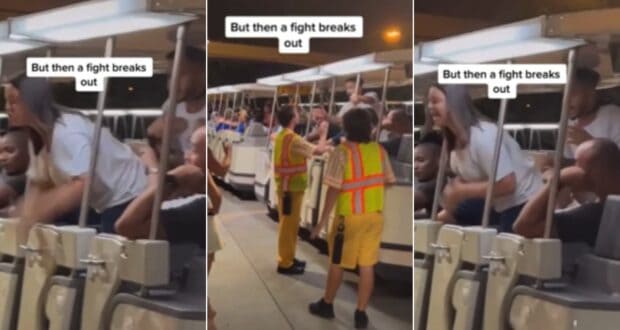 Hold onto your pixie dust, Disney fans. It looks like another dispute has unfolded… this time on the Walt Disney World Resort transportation Tram.

Last week, the infamous Magic Kingdom Park brawl hit social media as a family fought over what was suggested as line cutting. Here’s the video below if you missed it the first time around:

Eyewitness reports revealed the Magic Kingdom encounter unfolded because a family member joined her family in line after retrieving her phone from her ECV. With new updates of arrests and the fight hitting national news, it was sadly a Disney bubble-bursting moment for Disney fans.

And while we’ve seen fights unfold at Knott’s Berry Farm and Walt Disney World’s neighboring competitor, Universal Orlando Resort, in recent days, this time, Disney is back into the mix with a screaming match.

After a long day in a Disney Park, getting back to your vehicle is the primary focus. But it seems like these Guests handled the long day by ending it with an argument on the Walt Disney World tram.

@disneyworldtoday took to TikTok to share a brief clip, noting, “Can’t even enjoy the Tram now.” Here’s the video below:

Sadly, it looks like Walt Disney World Cast Members are attempting the dissolve the situation as an angry man and woman shout at Guests waiting to board the tram.

We aren’t sure what the argument was about, but it seems like a peaceful moment, even on the Disney parking trams, was out of reach for the surrounding Disney Park Guests.

One of the comments to the video notes, “At that point, running to the car may be faster. Run right away from that drama”… which we agree, as it sounds like the correct decision in this situation.

We will be sure to update Disney Fanatic readers are we learn more about this incident. In the meantime, we hope Guests visiting the Parks keep the villainous attitude far, far away… and keep the magic in (and around) the Disney Parks.